Eureka are re-releasing some of their previous Kenji Mizoguchi Masters of Cinema releases in new dual format Blu-Ray & DVD editions. Below is my review of a two-film collection containing Ugetsu Monogatari and the lesser known Oyu-Sama. I reviewed the other set they released here – Review of Sansho Dayu & Gion Bayashi. 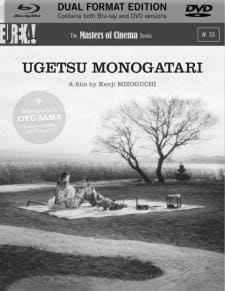 It’s very interesting listening to the special features for Ugetsu Monogatari where Tony Rayns talks about when the film was premiered at the Venice Film Festival. Akira Kurosawa’s Rashomon had won the festival’s Golden Lion a couple of years previously and Mizoguchi was jealous. He wasn’t happy that this ‘upstart’ was one of the first Japanese directors to be recognized at such a level in the west. So he went to work on quite a personal project, Ugetsu Monogatari, in the hope of dethroning the ‘youngster’. It played at Venice and was declared the best film that year, but the judges refused to award it the Golden Lion, instead giving it the Silver Lion, claiming that no film was strong enough to gain the top prize that year. On top of this, Mizoguchi himself wasn’t happy with the film, claiming the studio made him change his intended ending. However, these days Ugetsu Monogatari is considered by many to be the director’s finest work and has cropped up on numerous lists as being one of the greatest films of all time. Personally, I think I’d side with Mizoguchi though to an extent. As great as the film was, it didn’t quite match up to Sansho Dayu in my eyes and to be honest, I even slightly preferred the less respected Gion Bayashi.

Set during the Japanese Civil War of the sixteenth century, Ugetsu Monogatari follows the trials and tribulations of two men, Genjurô (Masayuki Mori) and Tobei (Eitarô Ozawa), as well as their wives (and son in Genjorô’s case). Genjorô is a hard-working family man who wants to profit on the inevitable war by selling his pottery to the soldiers. Tobei is a simple man who wants nothing more than to be a samurai but is told that he can’t even attempt to join their ranks without appropriate weaponry or armour. So he helps Genjorô produce a great stock of pottery to take to town and earn a slice of the profits. The war comes early as they have put the wares into the kiln though and the families are forced into refuge. Sneaking back into their village, the men do manage to rescue the results of their labour and take them to a further town, making a lot of money, but separating themselves from their wives. As the film goes on the men are punished in various ways for their greed, with Genjorô’s story bringing a supernatural element to proceedings as he is seduced by the mysterious Lady Wakasa (Machiko Kyô) and all memory of his wife seems to disappear with his new dream-like existence. 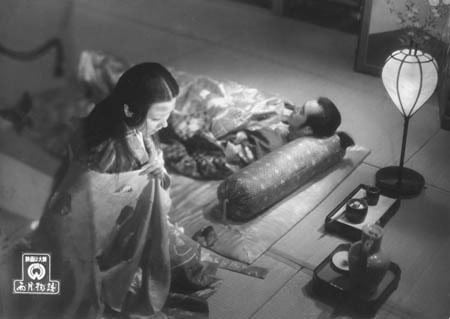 As mentioned, this didn’t quite live up to expectation for me, even on my second viewing, but that’s not to say it isn’t a great film. As ever, Mizoguchi’s direction and mis-en-scene is stunning. Employing his usual long takes and complicated tracking shots, the film looks fantastic and feels very much alive, although I didn’t feel it looked as meticulously fine-tuned as in Sansho. The misty boat journey near the start of the film and the climax of Genjurô’s entrapment in particular are stunningly well-realised sequences though and show why Mizoguchi is considered with such high esteem amongst critics and filmmakers.

For me, it was the more human elements that weren’t quite as strong as in the films in the previous set though. The narrative of Ugetsu is richer and more complex than in those others, but the dialogue, mainly in the first half of the film, felt a bit blunt. The film just didn’t seem as subtle as it could be in places. The latter half of the film, once the ghost story kicks in, is much stronger though. I think the reason I felt a little underwhelmed is because the elements of the film were quite diverse so I never really latched on to any of them for long enough to get a deep emotional reaction. The supernatural scenes for instance are fantastic, but only make up a small proportion of the film and the more dramatic moments are broken up throughout so I never felt the impact I did when watching Sansho. I guess Ugetsu isn’t meant to be as heartbreaking as that, but it still seems to aim for something similar.

I really shouldn’t keep comparing the films though and bad-mouthing Ugetsu Monogatari, because it is a truly great film. It may not have had the impact I would have liked, but the unusual narrative is entrancing and it is a beautifully told story. There are some hauntingly touching scenes too, especially towards the end, and makes for a strange hybrid of subtly creepy ghost story mixed with moral drama. You’re best off ignoring my nitpicking and seeing for yourself. 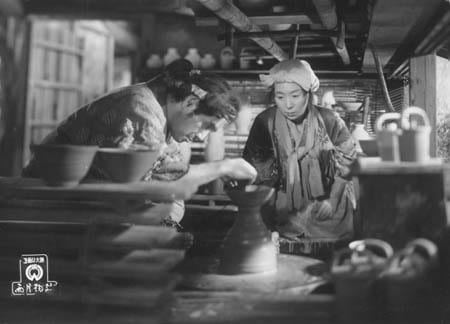 Oyu-Sama was the first film Mizoguchi produced for Daiei Studios, which was who he made all of the films in these two sets for. Of course, he’d been making films for several decades before this, so it wasn’t anywhere near the start of his career, but it was the start of a period in which he produced some of his most well-respected work, at least in western eyes.

Oyu-Sama tells the story of a bizarre love triangle of sorts. Shinnosuke (Yûji Hori) is looking for a woman to marry and is introduced to Shizu (Nobuko Otowa) as a prospective partner. However, when they meet he falls for her older sister Oyu (Kinuyo Tanaka), who develops feelings for the young man in return. Unfortunately, Oyu is a widow still caring for her young son and her strict family will not allow her to remarry. Seeing the love the two have for each other, Shizu agrees to marry Shinnosuke, but tells him on their wedding night that this is only to be a formality so that he can remain close to her sister. As this sham marriage moves on, the facade becomes more and more difficult to uphold (especially seeing as Oyu is unaware of it) and rumours in the town threaten their ‘arrangement’.

This is definitely the weakest film of the four. Although the subject matter is clearly very downbeat, the film isn’t nearly as moving as Mizoguchi’s other dramas. I think it’s largely down to the script, which is quite melodramatic and leaves little room for subtlety as characters come right out with their problems at frequent intervals. It’s a shame, as the idea is very dark and interesting for a modern western audience that doesn’t share the same values of honour when it comes to family matters. 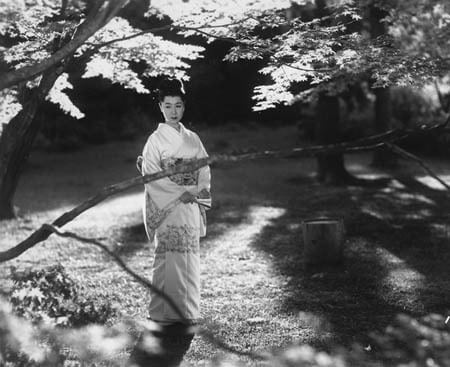 Mizoguchi does his best with the material though. He still crafts some memorable scenes, with a shock death in the middle beautifully handled and a poignantly poetic ending tying things up nicely. His visual style is stunning as ever too. A long tracking shot as Oyu falls ill and Shinnosuke takes her through a nearby house to rest is incredibly well constructed and complicated without really ‘showing’ it.

The music lets things down on the style front though. Oyu plays a traditional Japanese instrument, the koto, and the scenes when she plays this are beautiful, but elsewhere in the film the music is quite westernised and sounds bland when put against the sumptuous visuals.

Oyu-Sama is not a bad film by any means, but you get the feeling it’s a case of a great filmmaker working with not-so-great material. It’s worth a watch for fans of the director and is a welcome addition to the Blu-Ray/DVD set, but otherwise I’d stick to the classics.

Ugetsu Monogatari & Oyu-Sama are out now in one set on Dual Format Blu-Ray & DVD, released by Eureka as part of their Masters of Cinema Series. I got sent the Blu-Ray to review and the transfers are decent, but not quite as strong as the previously reviewed set. Ugetsu Monogatari looks crisp and clear, but shows its age more than Sansho Dayu does on the other set with minor scratches showing up here and there. The audio is a little treble-heavy again too. Oyu-Sama isn’t as strong, with quite a soft picture and a more damaged audio track. For such a rare film it still comes across very well though. I imagine this is largely down to the condition of the available print.

There aren’t many extra features, just a couple of trailers and some video pieces featuring Tony Rayns, which were included on the original DVD release. These are great though and focus on the context of the films with regards to Japanese cinema and Mizoguchi’s career at the time.

As usual you also get a hefty booklet in with the package. I didn’t get sent a digital copy of this as I usually do, but I imagine it will be as informative and fascinating as with their previous releases.