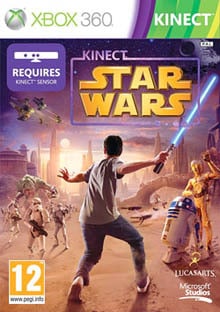 If you’re a Star Wars fan, then you will probably remember when you saw your first film. If, like many, you were young when this happened you may well have acted out your favourite scenes either on the way home or when you got back. This would no doubt have involved waving a stick, or some such, around as a lightsaber and also, perhaps, pretending you too had force powers to lift things off the ground.

Well now with Kinect you can put all this practice to good use and stand in front of your TV, wave your arms around and actually control a lightsaber (well an in-game one that is).

We should offer a word of warning though before we go much further. We thought that we had been served this gaming Nirvana before with the Wii game Star Wars: The Clone Wars Lightsaber Duels, and how wrong we were.

With the Kinect though you don’t have to wave anything more than your hands around, which is a slight improvement on the Wii. This doesn’t make KSW a dead cert hit unfortunately, for reasons we will come on to.

The first thing any adult SW fan will notice is that this SW game has come out of the cutesy side of SW spin offs. This is no dark KOTOR or some such. It doesn’t have Jar-Jar Binks on the cover, but it might as well do. 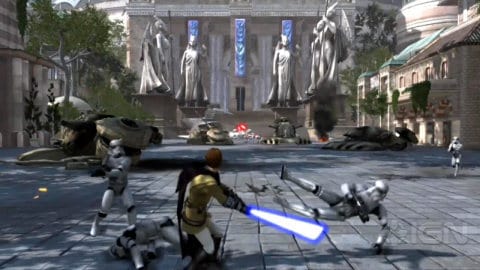 Being this type of Star Wars game, C-3PO and R2-D2 are your guides and appear and give pointless comments on various menu screens. The screens would be better off without them to be honest and the voice of C-3PO sounds as though it was done by Peter Serafinowicz, who actually did the voice for a Star Wars character in one of the films.

The main point of the game is a section called Jedi Destiny and you take on the role of a padawan, which of course is a great excuse to take you through the basics of using a lightsaber and force powers. This is where the disappointment for any child of the 1970s begins.

You start by learning to duel, which is annoying and rather pointless. It reminds us of boss battles where you are made to do things the way the game wants you to do it and not the way you (and other normal people) want to do it.

This is because you have to do the moves that the game tells you to do, not the moves that you want to do. For example your opponent is attacking you so you have to do a high block, a low block, a side block to the right and then a side block to the left (in that precise order) and then maybe you can have a go and try to hit them. This is repeated over and over again.

This tedious fighting mechanic is repeated at various points in the game too. These are only in special boss-esque points though because, thankfully, most of the time you can flail around with your lightsaber with merry abandon. 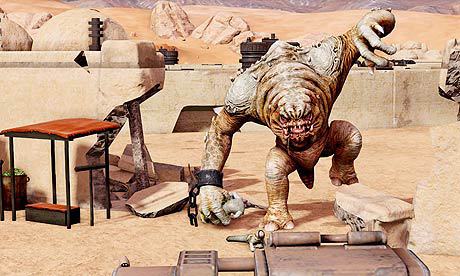 Why this was added we have no idea, it slows down the game and makes the lightsaber sequences annoying and something you want to get over with very quickly.

As well as having a lightsaber you also have force powers, though these are limited. In the game you select which hand you want to ‘hold’ the lightsaber with and you use the other for your force powers. With us it was our left hand.

Whereas with the lightsaber you wave your hand around, with force powers it’s more about holding your arm out straight when you want to do something, or pushing it out. In training you can pick up rocks, there is no try, and in combat you can use it to push over groups of battle droids or sweep them aside as if they are only toy soldiers. These controls actually work quite well and much better than we thought they would be.

We can’t say the same about the movement controls though. These are also done using your actual movements of course. You do a sort of lunge to move forward and a bunny hop to jump and side step to, well you can work that out. The trouble is you often have to do any, if not all, of these movements more than once in order for the game to register them. 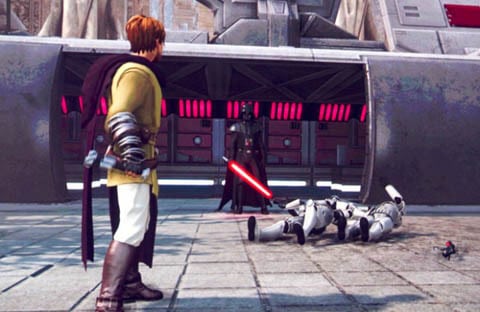 Then there are missions that just make you wonder why they were made for the Kinect. These involve you flying and trying to shoot things down. You are in control of the guns, but all you do is aim them. It is tedious and unless you are 11 it will give you backache.

In addition to the Jedi Destiny storyline, which is set somewhere between Episodes I and II you can also do some podracing. This is good exercise for your thighs as you will spend the whole time sort of squatting with your arms outstretched pretending to ride a pod.

Then there is Rancor Rampage where you play a Rancor and try to destroy as much as possible in a time limit, Galactic Dance-off where you dance as Star Wars characters. If you’ve ever wanted to see a Stormtrooper dance, your dreams have come true. The final other option is Duels of Fate where you have to fight your way to taking on Darth Vader.

It would be very easy to say that we are disappointed with Kinect Star Wars, but then we didn’t set our hopes that high in the first place. It is very much as we expected, a cutesy Star Wars game that makes OK use of the Kinect hardware. It’s for little kids, not big kids who should know better.