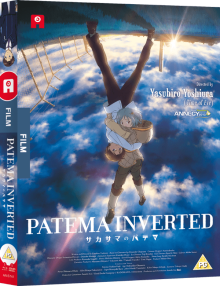 I’ve mentioned my love of anime once or twice in some earlier reviews, but regular readers may wonder why there are so few anime reviews on the site. I think the main reason is that I don’t watch much anymore. These days anime comes in the form of series more often than stand alone films and I don’t find the time to get through several hours of episodes. When I do get the chance to review an anime feature I jump at the opportunity, so when I was asked if I wanted to review Patema Inverted, I didn’t hesitate to say yes.

The titular Patema is a young princess who lives in a subterranean community. She’s coming to that age when she wants to break out and see more of the world, so she spends her evenings secretly exploring the outskirts of the area in which she lives. She can’t help but step into the forbidden ‘danger zone’ and it’s there where her life gets turned literally upside down.

After falling down a seemingly bottomless pit, she finds herself in the outside world, only she’s falling ‘up’ into the sky rather than down to the floor. She manages to keep from floating into oblivion through the help of a young boy Age, who is also dissatisfied with his lot in life. A student on the planet’s surface (a.k.a. Aiga), Age is troubled as his father died after trying to create a flying machine to explore beyond their world. Age wants to do the same, but the evil dictator who rules over Aiga restricts anyone from doing so or even thinking for themselves for that matter. He teaches those in Aiga to hate and fear the ‘inverts’ who live under the ground, calling them sinners who were cast into the sky when a failed experiment distorted the rules of gravity. When this dictator discovers Patema has infiltrated his world, he will stop at nothing to capture her and use her to keep his stranglehold over the people of Aiga. Age won’t let this happen though and, enlisting the help of Patema’s ‘invert’ friends, he sets out on a mission to save her and bring balance to the world. 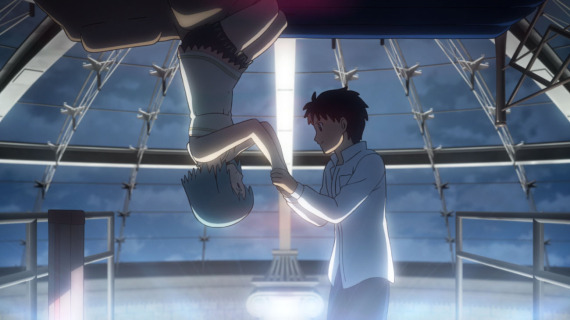 I’m going to sound very hypocritical in my review of Patema Inverted. This is because one of the reasons I liked this film is also very similar to the reason I felt a little disappointed with it.

I often find a common problem with anime films and series is that they can be over-stuffed with interesting ideas and concepts and end up going bonkers, particularly towards the end. Although this often leads to some spectacular sequences (such as the crazy finale to Akira), it generally baffles viewers and can make the whole thing feel like a mess. What I liked about Patema Inverted was that it took a really cool concept (that of having two worlds overlapping with opposite forces of gravity) and built it into a fairly simple storyline. The film plays with the concept nicely on a visual level, but it never gets bogged down in science or feels the need to cram extra ideas in to boggle the mind.

However, this also meant that the film was a little underwhelming (see that hypocrisy I warned you about). The story is rather bog standard, mixing a touch of Romeo and Juliet with a splash of 1984 over a textbook ‘save the princess’ adventure. The characters aren’t particularly well developed either and many are very one dimensional, especially the villain. A twist at the end is fairly predictable although it’s well realised. I think a little more could have been done with the gravity concept too and there are some logistics which are never explained (objects have differing gravity too, but where are the boundaries for this?).

On a visual level the film is great though. The backgrounds in particular are richly detailed and nicely colourful. Lighting effects and lens flares are well implemented too. The way the film plays with the gravity shifts on screen nicely messes with your head and visually the concept is very well handled.

It’s classily made in general too. Anime can often be produced on a low budget (particularly the TV series) so it’s always great to see a relatively big budget title making the most of things. With its fairly simple storyline the adventure is easy to get caught up in and it’s a very enjoyable film which flies along. It’s just a shame that it doesn’t quite stretch itself enough to become something exceptional.

Patema Inverted is out now on Blu-Ray and DVD in the UK, released by Anime Ltd. Three versions are available; a Standard Edition, Collector’s Edition and Ultimate Edition. I watched the standard DVD version and the picture and sound quality was decent. I imagine it would look great on Blu-Ray. You get English and French options for the audio and subtitles as well as the original Japanese track (which is the one I listened to).

You get quite a lot of special features, more than usual for an anime release, even on the standard edition. In fact, all editions of the film contain the same special features on the disc, but the Collector’s Edition includes a 48 page short story booklet from the original Japanese anime and the Ultimate Edition includes that too as well as a 136 page design works book in English, not available anywhere else in the world.

As for the on-disc features, on top of the usual trailers you get a number of interviews and messages in video and written form with the director and voice actors. You also get an option to view key scenes from the other perspective which is a nice touch. The final special feature is an audio commentary with the leading cast members and one of the producers. I didn’t have chance to listen to the whole thing, but from what I heard I found the lead actress a bit annoying. She might calm down as the commentary goes on, but she was a bit overenthusiastic for my liking.