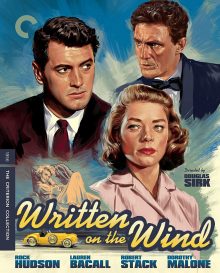 Though born in Germany and also starting his career there as a theatre and later film director, Douglas Sirk (born Hans Detlef Sierck) is best known as a director of Hollywood melodramas. During the 50s he found great success with a series of these for Universal, which included Magnificent Obsession, All That Heaven Allows, Written on the Wind, A Time to Love and a Time to Die, and Imitation of Life.

I was a relative latecomer to Sirk’s films but was impressed when I finally ventured into his oeuvre. I’m still only very slowly working through it though and still have a long way to go. So, I jumped at the chance to review the Criterion Collection’s new Blu-ray release of Written on the Wind.

The 1956 film throws you right into the action, opening with a sports car hurtling down a road on a windy night and teasing us with a possible murder, before jumping back a year to see how this tragedy came to be.

It all begins when geologist Mitch Wayne (Sirk regular Rock Hudson) invites executive secretary Lucy Moore (Lauren Bacall) to lunch with his boss’ son, Kyle Hadley (Robert Stack), who’s also a childhood friend of his. Mitch seems initially fond of Lucy so is frustrated when Kyle immediately falls for her and strong-arms her into an off-the-cuff trip in his jet to stay in a luxury hotel in Miami. Though initially put off by these over-elaborate attempts to win her favour, she’s talked into marrying him after he’s honest and bares his soul to her. 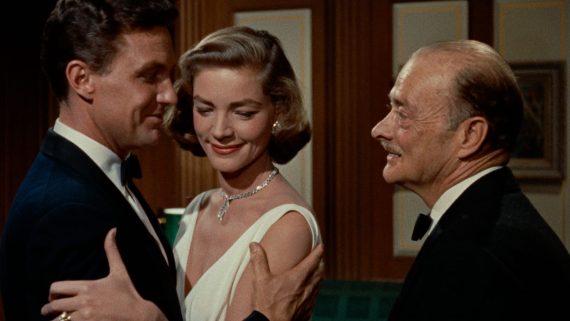 The marriage makes the generally lazy, hard-drinking Kyle a better man, to begin with, but when he discovers he’s unable to father any children, the shame drives him back to the bottle. Further fanning the flames of his anger and frustration is Kyle’s sister, Marylee (Dorothy Malone, who won an Oscar for her performance). She’s the family’s ‘black sheep’, known for sleeping around and doing as she pleases, much to the despair of her wealthy father, Jasper (Robert Keith). Marylee has long loved Mitch, but he won’t reciprocate, seeing her as a sister, rather than a lover, due to the time they spent together as children. When she senses Mitch has eyes for Lucy, Marylee uses this to get back at him for shunning her, by planting the seeds of suggestion in the mind of Kyle.

I saw the film, on a surface level, as being about jealousy and masculinity. Mitch is jealous of Kyle getting Lucy, Kyle is jealous of Mitch because his father prefers this near-adopted son over his own and also because he’s tired of the ultra-manly Mitch always solving his problems for him. Meanwhile, Marylee is jealous that Mitch has eyes for Lucy but not her. It’s a veritable smorgasbord of desires and frustrations. 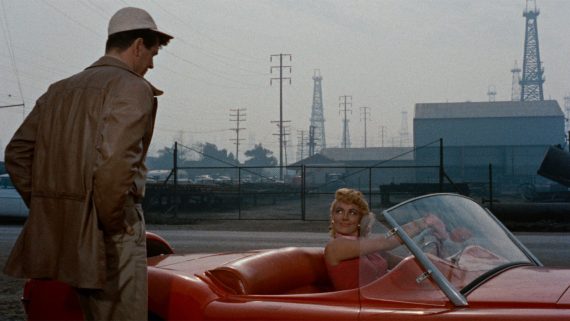 Sirk, however, called the film a social criticism of the wealthy and the American family unit. Everything looks beautiful on the surface but underneath it’s rotten. It’s about excess and how that acts as a disease on people and families. The film is full of excess, to further emphasise this.

The development of TV was damaging the film industry during the 50s. To fight back, Hollywood amped up the sex (as far as they were allowed back then) as TV was very much clean cut at the time. There’s no graphic sex in Written on the Wind, but the film still has a fairly sordid edge with plenty of sexual suggestion, as well as bringing up then taboo subjects, most notably infertility. As such, it’s quite a lurid tale for its time adding a tabloid entertainment sheen to a quietly subversive story.

As usual from Sirk, colour is boldly utilised and the staging and design make for a film that looks artificial but gloriously so, further aiding the attention-grabbing approach and sniper aim at American excess. 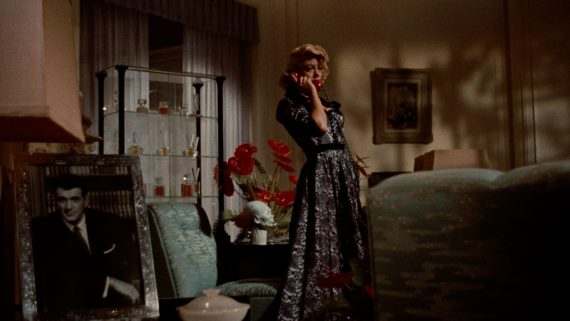 There are some wonderfully grand visual representations of the character drama too. Sirk always liked to use objects and settings to ramp up the emotions, metaphors and storytelling and here he really goes to town. The wind and leaves blowing through the house at the start are a perfect example of this. He perhaps overdoes the phallic and sexual symbolism a little though, with the oil wells people keep fondling and such. The worst culprit is the little boy violently riding a toy horse after Kyle discovers he’s infertile. That had me in hysterics, though its over-the-top nature fits the rest of the film, so I wouldn’t necessarily call this a criticism.

Hudson is not someone you’d call a classically great actor but he’s perfect in Sirk’s films and has a strong, suitably handsome presence here that fits the role. Bacall delivers possibly the most classically strong performance though. I particularly liked her early scenes with Robert Stack when her character is struggling to know what to think about his fawning and elaborate gifts. Her reactions are pitch-perfect, when, in the wrong hands, they could spoil this early development of the character. Stack himself is great too, dealing with wildly varying ups and downs. The performances on the whole bring the potentially trashy material to life. It helps that the actors are given wonderfully complex and troubled characters to flesh out. 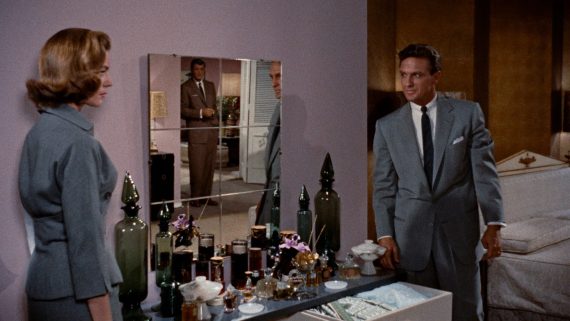 Written on the Wind perhaps doesn’t have the emotional, tear-jerking impact of some grand melodramas but it works through its compulsive storytelling and enjoyably bombastic approach. Like a good pulp novel, it’s not subtle but you can’t put it down. If you dig a bit deeper though, there’s more to the film than meets the eye.

Written on the Wind is out on 21st February on Blu-Ray in the UK, released by The Criterion Collection. The colours are wonderfully rich and vivid. Technicolour films of the era can often look a bit soft but this is pretty sharp and detailed in comparison to similar titles. The audio is decent too.

‘Acting for Douglas Sirk’ discusses both Written on the Wind and Tarnished Angels, as the two films are quite closely linked in terms of cast, theme and narrative. With contributions from Sirk himself, on top of many other principals, it’s a valuable piece.

Patricia White’s interview offers an interesting analysis of the film to better appreciate Sirk’s possible intentions. It helped me reassess some of my thoughts on it.

So, not one of Criterion’s most loaded packages, but what’s there is first-rate and the film looks and sounds great, so it’s still an easy recommendation. 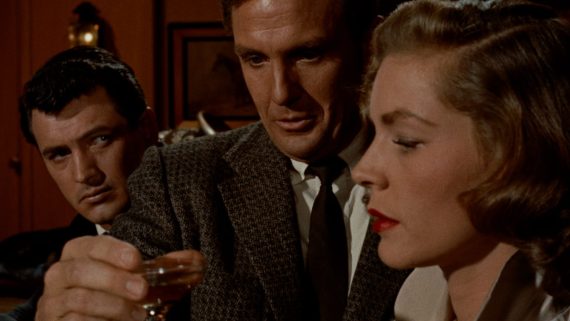