In 1989, Japanese Indie director Shin’ya Tsukamoto made waves with his low budget, cult sci-fi/horror film Tetsuo: The Iron Man. Visually arresting and shot in black and white, Tetsuo gained international reach in the 90’s thanks to its cyberpunk aesthetic, bizarre scenes of body horror and hyper-kinetic anime-style visuals, and is still an incredible film to watch today. Tsukamoto carried that newfound recognition through the 90’s with further cult hits such as Tetsuo II: Body Hammer, Tokyo Fist and Bullet Ballet, but his direct follow up to Tetsuo, Hiroku The Goblin, has been little seen in the West. Thankfully Third Window Films is bringing this fun little horror comedy to genre fans, complete with a lovely looking 2K restoration. 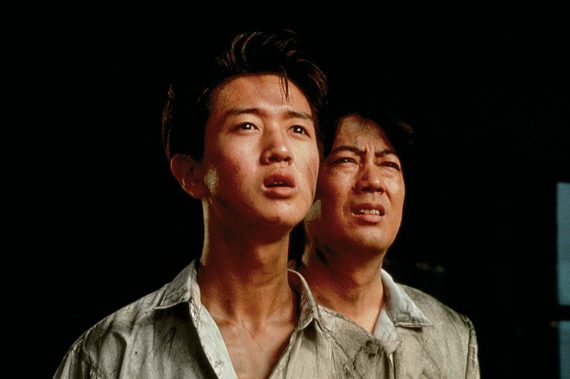 Hiruko the Goblin is a curious film. Clearly made on a much larger budget than Tetsuo and devoid of that films bleak tones and nightmarish imagery, Hiruko The Goblin is instead a bright, funny and quirky film about a gateway to hell that happens to sit underneath a Japanese school. Professor Hieda Reijirou (Sawada) is an archaeologist who, following his wife’s death, becomes convinced that there is a dark goblin force trying to invade our reality and sets out with his wife’s nephew Masao (Kudou) to investigate a series of disappearances at the school which may be related to a teacher (Takenaka) inadvertently opening the gateway and releasing the titular Hiruko.

The first thing that is apparent about Hiruko The Goblin is that it’s a far more accessible film than Tetsuo. Shedding an ambiguous plot for a more coherent story and visuals, Hiroku The Goblin nevertheless bears the marks of its director proudly. There are still some wonderfully shot moments of weird body horror and hyper-kinetic cinematography which, coupled with the strong vein of comedy and generous splashes of gore gives the film a feeling of a strange cross between John Carpenter’s The Thing and Sam Raimi’s Evil Dead 2. The performances are over the top in a good way, with Sawada’s twitchy Professor Reijirou desperately feeling ever much the unlikely hero of Bruce Campbell’s Ash Williams, and Kudou’s Masao gradually coming to the realisation of the truth behind the goblin gateway as his closest friends are bumped off one by one. 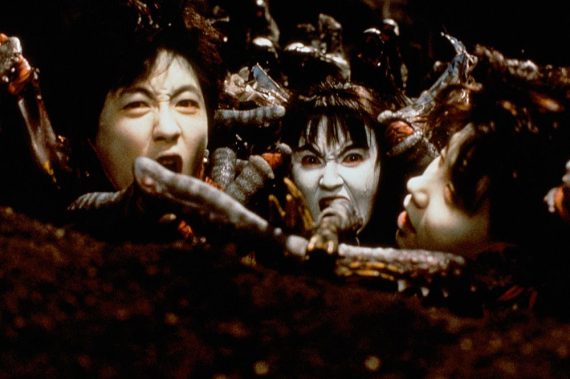 Visually the film looks great, not only with the fantastic clean up that Third Window have provided, but also in the overall aesthetic of the film. It’s bright, with plenty of primary colours giving a comic book feel to every frame and the production design looks great to boot. Reijirou’s homemade goblin hunting gear has a very Ghostbusters-esque feel to it, all cobbled together with exposed wires and blinking lights, and the creature effects are superb. A mix of puppets, prosthetics and stop motion, the goblins look superbly weird, creepy and otherworldly enough to give the film its horror chops. There was perhaps one or two duff looking VFX shots that seemed to be overstretching the capabilities of early 90’s CGI but they thankfully don’t take you out of the film too much.

Where the film stumbles somewhat, however, is in its pacing. Out of the gate it leaps into what is ultimately a madcap combo of chase sequences and Scooby-Dooing as our unlikely heroes try to figure out what the hell is going on, which ultimately slows down towards the end of the second act leading into a finale that’s a lot slower paced and far less kinetic than the first two thirds of the film. The result of this is that the relatively short 89min run time ends up feeling quite dragged out towards the end as the film loses some of its steam and can result in a little bit of clock watching. This seems to be exacerbated by the smaller cast as well, especially seeing as many of them don’t make it through the films first act intact, meaning that the remainder of the narrative follows predominately our two leads who quickly run out of meaningful ways to push the story forwards. 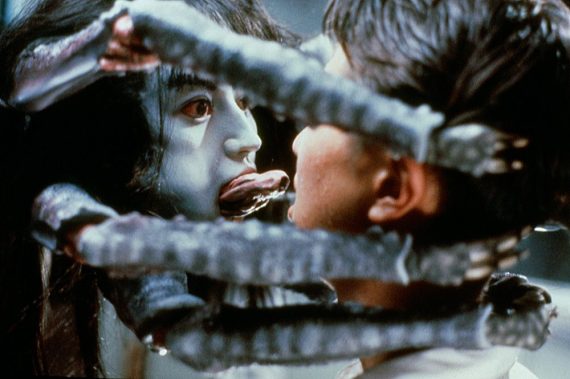 Nevertheless, Hiruko The Goblin is a fun little film that many viewers will not have seen and is an easily recommended way to kill an hour and a half. Fans of Tsukamoto’s more subversive work may be expecting something that this film doesn’t really deliver, however, but if you’re just looking for a crazy, splashy horror comedy, this one is well worth picking up.

There aren’t too many bonus features included with Hiruko The Goblin, but what is there provides a fascinating insight into the making of the film, predominantly from the recent interview with director Tsukamoto, in which he expresses his joy at working not only on a larger budget studio film, but also with the works of one of his favourite Manga authors. Also of interest is the short, vintage interview with effects artist Takashi Oda as well as a quick featurette demonstrating how some of the animatronics in the film work.