Early 80s horror oddity that was perhaps eclipsed by it more famous peers and fell off the radar due to it being much more of a mystery/drama rather than an outright slasher. However, there is oodles of atmosphere, some great characterisation and while it’s a little more sedate than some of it’s time period’s ilk, Deadly Games still features some impressive kill set-pieces.

Not least in the opening scene when a woman alone in her hilltop house is stalked and killed by a ski mask wearing killer. The sister of the victim, Keegan (Jo Ann Harris) arrives at the murder scene to find out what happened to her sibling and soon makes friends with the investigating cop, Lane (Sam Groom). Keegan then reconnects with a group of women who were friends of her sister, and it seems they are also the targets of the killer as they soon start turning up dead. As Keegan’s and Lane’s relationship hots up, and the bodies pile up, could the killings have something to do with Lane’s oddball, chain-smoking, old-movie-theatre-inhabiting friend, Billy (Steve Railsback)? 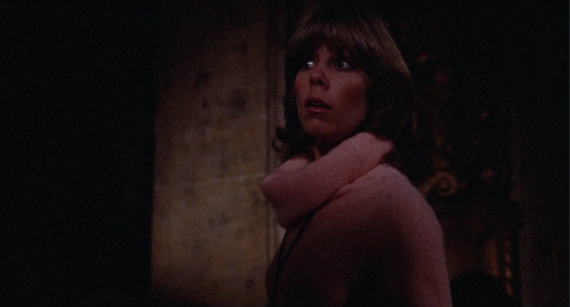 Masked killer, sleepy Californian town, a group of friends dropping one by one, and an eccentric on the periphery of all the action are all great ingredients for a cool 80s slasher. However, Deadly Games (referring to the weird horror themed board game Lane and Billy play!) is in no rush to tick off the slasher checklist just so fans can get their fix. Sure, there are some impressive kill scenes, including a nasty pool death, but the film is much more about mood and the characters within the story. Nothing wrong with this approach but those looking for a fast slasher fix may be disappointed.

Instead, Deadly Games is more creepy than gory not least due to Railsback’s intense (was he ever anything else?!) performance as the constantly smoking crank who lives in an old rundown movie theatre: which also gives a cool creep vibe in the final act. Writer/director Scott Mansfield is just as concerned with exploring his group of characters as he is with delivering kills and it’s refreshing to see a of group fleshed out woman as the central characters, even if they do fall prey to a demented man (no spoilers, it’s obvious who the killer is!). Collen Camp, Jere Rae-Mansfield and Jo Ann Harris all give great performances and are much than the typical fodder that could clog up these types of slashers. Jo Ann Harris makes for a unique final girl (strong, quirky, annoying and resourceful, in equal measure) and while some may get irked by her constant quips, this reviewer found her delight as the lead. 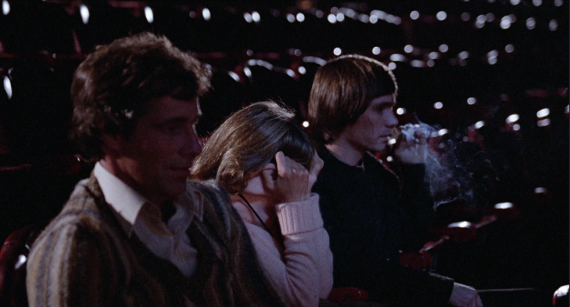 The film also has a classy look for a seemingly low budget slasher thanks to some ace cinematography that captures the era in all it’s warm nostalgic glow. There are also cameos from NFL player of era Dick Butkus and the original Lost in Space’s June Lockhart, to add to the quirk factor. Deadly Games may not live up to the slasher potential of its title and hardcore horror fans may be put off by its languid pace and eccentric development but there is enough style, mood and easy-going thrills for those willing to give it a chance. Plus, always great to see lesser-known horror titles from the 80s getting cleaned up with a nice new shiny disc release.

• Brand new 2K restoration from the original camera negative
• Original uncompressed mono audio
• Optional English subtitles for the deaf and hard of hearing
– Brand new audio commentary with The Hysteria Continues
• Sooty’s a Sh★t – a brand new interview with actor Jere Rae-Mansfield – interesting interview with the charismatic Jere Rae-Mansfield about how she came to be cast in the film and the subsequent making of it. Deadly Games would be her last screen appearance before segueing into a successful career in producing, and she married Deadly Games director, Scott Mansfield.
• Practical Magic – a brand new interview with special effects and stunt co-ordinator John Eggett – fun interview with the likable Eggett who gives fascinating insight into how he got into the movie business (both in the stunt and special effects departments) and how they created the impressive kill gags in Deadly Games. With a remarkable CV in the movie business, one feels you could make a whole documentary with Eggett telling his movie-biz stories,
• Extensive image gallery featuring never-before-seen production photos and promotional material – cool selection of stills from the making of the film. Always fun to see behind the scenes of old school horrors.
• Original Trailer – cool retro trailer that makes the film seem much more of an action-packed horror but shows pretty much the whole film and even the shock ending!! WTF!
• Original screenplay under the title Who Fell Asleep [BD-ROM content]
• Reversible sleeve featuring original and newly-commissioned artwork by Ralf Krause