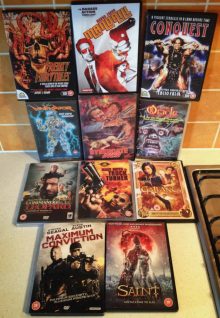 With the 10th Weekend of Trash (backstory and previous write-ups can be found here – I, II, III, IV, V, VI, VII, VIII & IX) we pulled out all the stops, with a couple of films on the Friday as well as a record-breaking seven whole films on Saturday. We got a nice range of B-movies watched and picked wisely, with the only real dodgy titles being on Friday night.

The reviews are only brief as usual and with so many films being watched and the nature of their quality, my ratings should probably be taken with a pinch of salt. I’ve included clips and trailers when possible too. 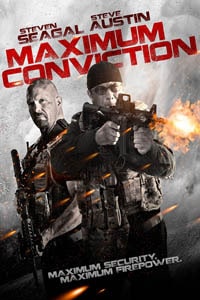 Segal takes ‘shopping it in’ to a whole new level as he waddles around in layers of ill-fitting clothes that make his ample frame pretty much spherical. Steve Austin fares a little better but still looks bored, as will anyone watching this dull Assault on Precinct 13 wannabe. There’s a seemingly high volume of action, but it’s pretty poor quality, ‘caught in a corridor’ shoot-out kind of stuff. Two fights at the end are decent, but they come too little too late. 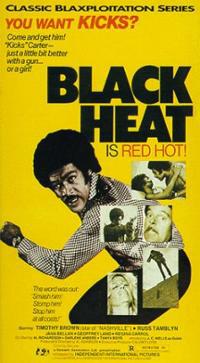 This authentic slice of 70’s grindhouse is sleazy, grimy and packed with repetitive funk music. It’s also pretty dull though and doesn’t live up to its awesome cover. It has a nostalgic charm and the first half an hour is fun in a groovy retro kind of way, but it’s a slow and rather uneventful affair overall.

I couldn’t find any trailers for this film unfortunately. 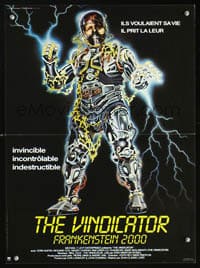 Marketed as a Robocop rip-off (“Out cops Robocop”) but actually doesn’t have much to do with it (he’s not even a cop). It has more of a Frankenstein thing going on, in fact that was the name of the experiment in the film which turns a scientist into a robotic killing machine! It’s cheesy 80’s sci-fi action at its best. Not too much padding, quite a nasty dark edge and some cool little set pieces. Pam Grier makes a memorable appearance as an evil bounty hunter too. What more could you need?

A clip which shows our hero getting burnt alive (but don’t worry he gets resurrected as The Vindicator!) 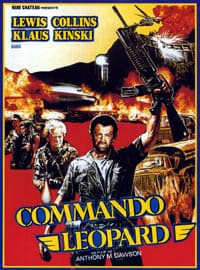 Lewis Taylor faces up against an evil dictator’s forces lead by Klaus Kinski in this awesome commando movie. There are explosions a plenty in this action packed extravaganza. Ennio Morricone provides the score and it’s not one if his best but the cheesy closing song will get stuck in your head. The director makes the most of some cool locations with some decent camerawork amongst plenty of fiery carnage. Great fun. 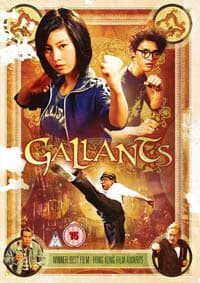 A modern tribute to the old school Hong Kong kung-fu classics featuring a number of the genre’s stars of the past. It has a great balance of comedy and action and both aspects are handled very effectively. The stars now in their 50’s and beyond can still pull off the moves, making for a couple of fantastically convincing fight scenes. Some cool animated sections and lively visuals keep things fresh too. Good stuff. 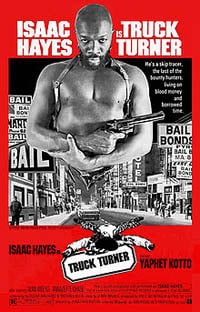 A blaxploitation classic featuring Isaac Hayes. Loaded with bad-ass wisecracks, and truck-loads of attitude (sorry), this is probably the best blaxploitation movie I’ve seen. After a fun first half, the second gets pretty nasty too once Yaphet Kotto arrives to help Nichelle Nichols (Uhura from Star Trek) get revenge on the death of her pimp by killing Truck Turner. Add a top notch score from Hayes himself and you’ve got yourself a sweet ass muthaf@*#ing movie. 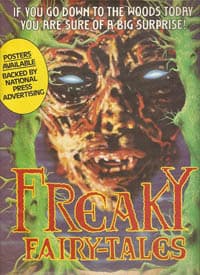 The Saturday roll continues with this hugely enjoyable comedy horror anthology film. An uncle tells his young nephew three unconventional and inappropriate fairytales full of sex and violence. It doesn’t take itself seriously at all and is bags of fun. It threatens to get too silly but gets away with it through the sort of uber zany antics you only get in 80’s straight to video fare. The gore fx are pretty cool too. Oh and Oscar winning actress Melissa Leo is in it!

Or watch the whole film! 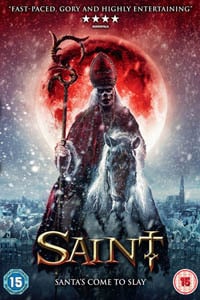 Saint Nicholas wreaks havoc on Amsterdam in this slasher comedy horror. It’s nicely gory if a little heavy on the CGI, never particularly scary but well paced and entertaining. It’s visually impressive too with pretty slick production values (other than some dated CGI). It didn’t feel as original as Rare Exports, but it’s still a pleasantly nasty alternative to the usual holiday fare. 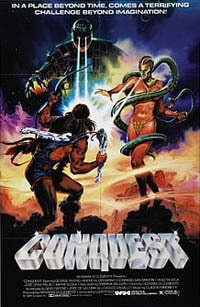 Lucio Fulci directs this trippy fantasy film. I was a little too tired to fully take it in, but it was fun in a surreal kind of way. This being a Fulci film there’s lots of nudity, violence and gore, plus the film doesn’t make a whole lot of sense. Just what we were after then!

Or watch the whole film! 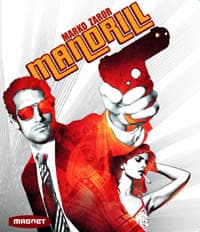 This Chilean action movie is part Bond spoof, part revenge drama. The tonal shift is a little awkward and the film slows down a bit as it gets more serious, but the action is spectacularly acrobatic and I really enjoyed the goofy humour in the first half. 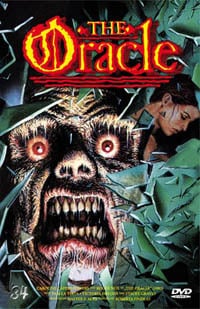 This horror/crime hybrid from the 80’s tells the story of a woman that unleashes the angry spirit of a murdered man after using a kind of ouija board. Yes it’s dated, yes some of the acting is hysterically over the top, but its busy narrative keeps things interesting and a handful of rather gory set-pieces kept the B-movie thrills quota high.