The Weekend of Trash is back (backstory and previous write-ups can be found here – 1, 2, 3, 4, 5 & 6). The guys visited me for the first time, saving me the trip down to Bristol. We didn’t all get together until the Saturday, but I snuck in a trash-classic on Friday to make up for it. There were no horrors this time around, but we got plenty of action films watched which is fine by me.

The reviews are a bit brief because I’m ultra busy, but I’ve included plenty of clips and trailers for your enjoyment. Lets have a look at what we watched: 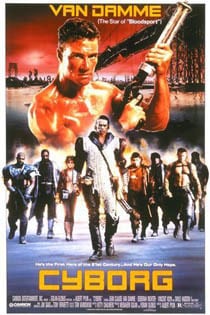 I knew Andrew and Justin had seen all of Jean-Claude Van Damme’s 80’s & 90’s work, so I thought I’d kick off the weekend early by sneaking in an 80’s action/sci-fi ‘classic’. Fairly ambitious for a Canon title and very stylish as most of Pyun’s earlier films are, Cyborg is kind of cool and I enjoyed a lot of it, but it’s ultimately too slow and serious. The performances are quite painful too, the lead bad guy Fender (Vincent Klyn) is so bad it’s actually quite funny. The action scenes have a few cool elements and are well shot, but are rather clunky in terms of choreography. 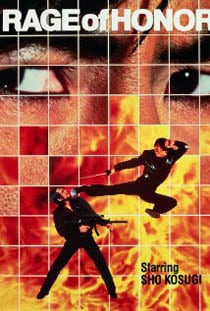 A star vehicle for everybody’s favourite 80’s ninja, Shô Kosugi, Rage of Honour is unfortunately a bit dull until the final third when the action gets really good. Kosugi is rather wooden and uncharismatic too, which lets down scenes in between the action. It’s OK though overall in a text-book 80’s action movie kind of way, it’s just a bit bland and forgettable away from the action.

The trailer (which makes it look pretty amazing):

The Man From Nowhere 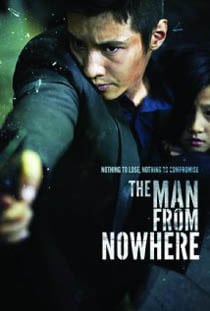 This really doesn’t belong in this collection as it certainly can’t be called ‘trash’, but we squeezed it in amongst the VHS titles. And I’m extremely glad we did as I thought The Man From Nowhere was fantastic. Like with a lot of Korean films, it throws a lot of genres into the mix, with drama, dark humour and action beats all coming together. The film juggles all of these with ease though and it never feels unfocused or unbalanced. The drama in particular is surprisingly effective for what looks like an action film, helped by a strong child performance from Sae-ron Kim. It’s an incredibly classy affair that looks great and works on every level. It gets a little too nasty at times but it’s stylish and engrossing throughout. 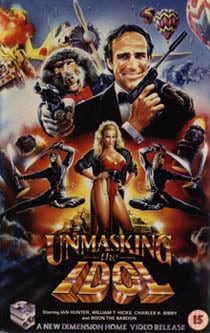 Well, it was only a matter of time before we put on a real stinker. I was really disappointed too as I requested this film after seeing the VHS cover. This promises hot air balloons, ninjas, explosions, scantily clad ladies and a baboon with a gun! OK, we actually got all of those things, but for some reason none of it came together to create anything that could be called fun. A massive problem is that it has the least charismatic star ever with Ian Hunter as Duncan Jax. On top of that, it doesn’t really know what it wants to be. The filmmakers are clearly referencing James Bond and Indiana Jones, but it isn’t funny enough to be a spoof and not exciting enough to be an homage. It’s just plain boring. The fact that they use possibly the slowest mode of transport, hot air balloons, to escape an island that is about to explode says it all. Mr Boon the baboon is best thing about it. 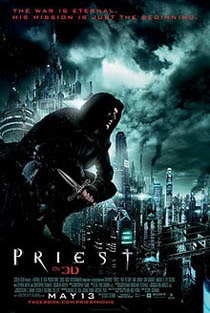 This got a bit slated on release, but we all really enjoyed it. Taking it as a piece of 80’s style B-movie action, it’s a lot fun. Yes it throws a lot into the ring, genre-wise, but I thought it juggled everything fairly well. It’s also very stylish, despite some hit and miss special effects. The finale is disappointing and lets it down a bit, ending rather abruptly, but it’s enjoyable and fast-paced throughout. Randomly I also noticed that the story is actually a retread of The Searchers! 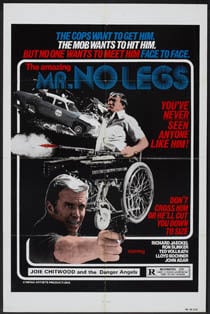 A true piece of grimy 70’s grindhouse cinema, Mr. No Legs is that rare beast, a disability-exploitation film. You certainly wouldn’t get away with something like this these days and it kind of feels wrong to watch a film that relies solely on the sight of a double amputee being a nasty piece of work as its only selling point. It actually has a few fun exploitative moments (double amputee martial arts!) but ultimately it’s rather dull and is beyond cheaply made.

Easily the best clip from the film:

The entire film – should you feel intrigued: 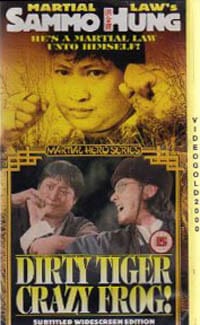 We were lucky to end on high with this one. An awesome slice of old school martial arts comedy, Dirty Tiger, Crazy Frog is a fantastic early Sammo Hung vehicle. Filled with great choreography and surprisingly funny goofy humour, it’s an absolute blast to watch. It’s extremely daft as most of the kung-fu comedies of this era are, but we had a ball with it – the repeated gags of the woman with an endless supply of fake arms was a particular highlight. Fans of Sammo and early Jackie Chan should definitely check this out, although it’s extremely hard to get hold of (in the UK at least).

One of the excellent fight scenes in the film: