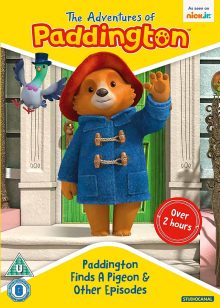 Parents of young children around most of the world (myself included) are pretty fed up with trying to keep their little ones entertained at home day in day out during these testing times. So it’s nice to get a little gesture like this from Studiocanal, who have offered Blueprint: Review a couple of The Adventures of Paddington activity sheets to give to our readers

And this is all in celebration of the release of The Adventures of Paddington: Volume 1 on DVD in the UK. Here’s some more info from the press release:

Following an incredibly successful launch on Nick Jr., STUDIOCANAL is pleased to announce that the first volume of the animated TV series THE ADVENTURES OF PADDINGTON is coming to DVD on 18th May with Paddington Finds A Pigeon & Other Episodes. Be among the first in the world to see a new version of a most familiar bear! A heart-warming show about being curious, being good to others, and being part of a loving family. The series features a brand-new theme song “Paddington Bear” written and performed by one of Britain’s most successful musicians, Gary Barlow (Take That). Ben Whishaw (Paddington 1 & 2) reprises his role as the voice of everyone’s favourite marmalade-loving bear and is joined by new cast members including Morwenna Banks, Darren Boyd and more.

The Adventures of Paddington is directed by Adam Shaw and Chris Drew of Blue Zoo (Go Jetters, Digby Dragon, Miffy, Q Pootle 5), and developed for television and written by Jon Foster and James Lamont (The Amazing World of Gumball, Cuckoo, Paddington 1 & 2).

The series (52 X 11’) is executive produced by multi-award-winning David Heyman (producer of all eight of the Harry Potter films, Paddington 1 & 2) and Rosie Alison (Boy in the Striped Pyjamas, Paddington 1 & 2). The Adventures of Paddington is produced by Karen Davidsen (formerly with Disney and HIT Entertainment) and Simon Quinn (Isle of Dogs, Fantastic Mr. Fox), and co-produced by Rob Silva.

THE ADVENTURES OF PADDINGTON is available to pre-order from https://bit.ly/AdventuresOfPaddington and coincides with the upcoming launch of the official Paddington Bear YouTube Channel – www.youtube.com/Paddington. A brand-new online destination for fans of Paddington big & small.