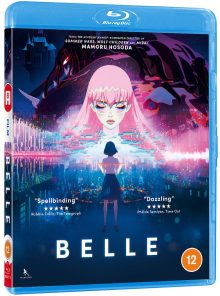 Mamoru Hosoda is one of the most successful and acclaimed anime directors of the 21st century, garnering favourable reviews and healthy box office takings for most of the handful of films he’s made in the past 20 years. His 2018 film Mira even earned him an Oscar nomination for Best Animated Feature Film.

It was reportedly at the ceremony that Hosoda met Disney animator/designer Jin Kim. The pair both admired each other’s work and promised to collaborate at some point. They kept that promise as Kim did character design on Hosoda’s follow-up to Mirai, Belle. Also joining the team was another international influence, in the form of Cartoon Saloon’s Tomm Moore and Ross Stewart, who did some art design on the project.

With this illustrious lineup and Hosoda riding high after a number of successes, Belle unsurprisingly went on to be another hit, becoming the third highest-grossing film at the Japanese box office in 2021 and joining the UK Top 10 for highest grossing original anime.

It received strong critical acclaim too, so I was thrilled to be offered a chance to review the film myself for its physical release in the UK. My thoughts follow.

Belle tells the story of Suzu (voiced by Kaho Nakamura), a shy 17-year-old girl who lives in a rural village with her father. Her mother died when she was young and since then she’s been afraid of singing (which she learned to do with her mother) and generally drawing attention to herself.

However, one day she discovers U, a new social network built around a virtual reality world where users assume a new identity biometrically tailored to their true selves. When she logs in she becomes Belle and through this avatar soon literally finds her voice, singing a heartfelt number written by herself.

That song quickly goes viral and Belle becomes a big hit on U, aided by her closest friend Hiro (Lilas Ikuta), who uses her genius-level computer skills to make and keep Suzu on top. Still lacking confidence in her true self though, Suzu keeps her online identity a secret from everyone else.

In U, however, Belle comes across a mysterious avatar called Dragon (or The Beast) and finds herself strangely drawn to him. The online world’s authorities continuously chase him down, believing Dragon to be a threat to U’s safety, but Belle believes he’s just troubled and misunderstood.

As Suzu/Belle grows more concerned about Dragon’s safety, she enlists the help of her friends to find out who he/she is in the real world and why he is so tormented.

Belle is a visual treat, as you’d expect from a big-budget anime directed by a respected figure like Hosoda. The real world is beautifully rendered in a realistic but painterly style, whilst U is overloaded with detail and fantastical imagery. There is also a wide range of character styles reflecting the variety of tastes and personalities of those plugging into the virtual world.

However, I found the film lacking in other aspects. It’s stuffed with ideas but, despite the fairly long running time, these aren’t given enough time to be properly fleshed out. Big jumps in the narrative and character arcs sometimes occur suddenly, making it feel like the script was originally a lot longer but much was cut out. Some key relationships, particularly the one between Suzu and her father, also feel skimmed over.

This is reflected in how Belle tackles some of its central ideas. The social media setting opens up concepts that explore how most of us live our lives virtually in the modern age. The film touches on some interesting aspects, such as the fickle nature of online fame, how it rides on both criticism and idolisation and how these online personalities are often false or a mask of anonymity for those wishing to cause psychological hurt. However, with so much thrown into the mix, it all gets watered down and ultimately pushed out of the way for a generic Beauty and the Beast story.

However, despite much of Belle seeming half-baked, it does manage to deliver the intended emotional impact in a few key sequences, most notably the musical numbers. The handful of Belle’s songs that appear in the film, whilst a little poppy and over-produced for my usual tastes, are suitably rousing. The climactic musical performance is particularly emotive.

So, Belle is visually stunning and hits a couple of effective emotional beats but, like most social media posts, it ultimately feels a little shallow and under-developed. There is a lot of talent on display in the film and it’s well-worth seeing but I couldn’t shake the feeling it could have been a lot better with a few tweaks and trims at the writing stage. 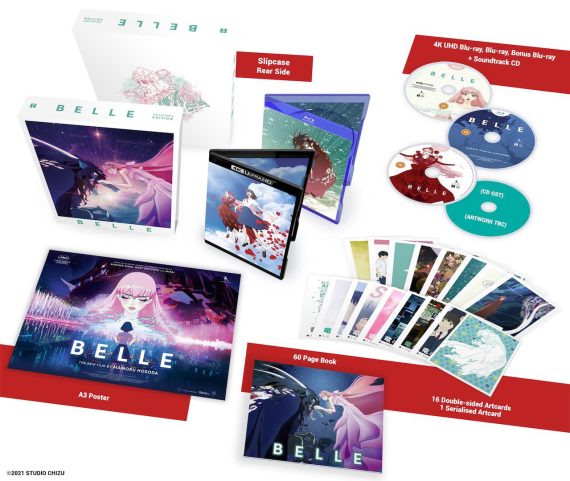 Belle is out now on Blu-ray and DVD, released by Anime Ltd. The film will also be available on 4K UHD Blu-ray on 7th July 2022 as part of a Zavvi and Anime Limited web store exclusive Deluxe Edition, which will not only include the film on both 4K UHD and Blu-ray, but is also packed with bonus content: an additional Blu-ray disc with over 2-hours of extras, a CD of the film’s acclaimed Japanese-language soundtrack, a 60 page booklet, 16 double-sided art cards, and an A3 recreation of the UK theatrical poster all housed together in rigid collector’s packaging.

I only received the film on Blu-ray, so can’t comment on the extra features, but it sounds like a great release. The picture and sound quality were very impressive at least, and there are dozens of audio and subtitle options, covering every base imaginable for English and Japanese speakers/readers, including those that are hard of hearing.