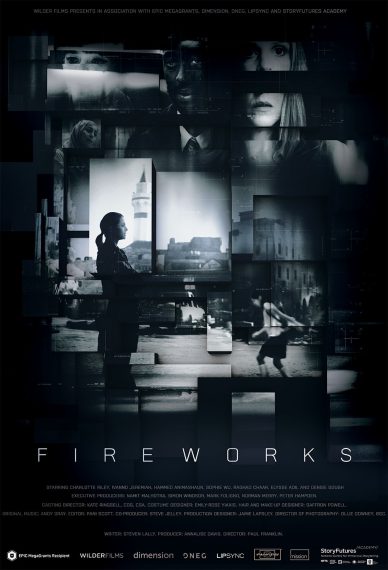 Director Paul Franklin’s and Wilder Films FIREWORKS is a tense thriller exposing the life-changing decisions those at the top can deliver. The film stars Charlotte Riley (Press, Wuthering Heights), Denise Gough (Andor, Too Close) and Ivanno Jeremiah (Humans, Black Mirror). This live-action short film is one of the first films to push Virtual Production to another level – the LED screen creates a convincing three-dimensional image on set that changes as the camera moves. It feels as if you are actually on location, in the space itself. The image on the screen becomes a seamless extension of the physical set, with a level of realism and scale that would have previously been impossible.

Producer Annalise Davis is a BAFTA Award-winning feature ﬁlm producer whose credits include THE RAILWAY MAN (starring Colin Firth and Nicole Kidman) and UP THERE (winner of Best Independent Film at SBIFF, and Best Film and Best Director Scottish BAFTAs). She has won multiple awards for her short ﬁlms, including Best British Film at EIFF, and a Palme d’Or nomination in Official Competition at Cannes Film Festival.

I had the pleasure of speaking to Annalise recently about her experience in producing Fireworks. 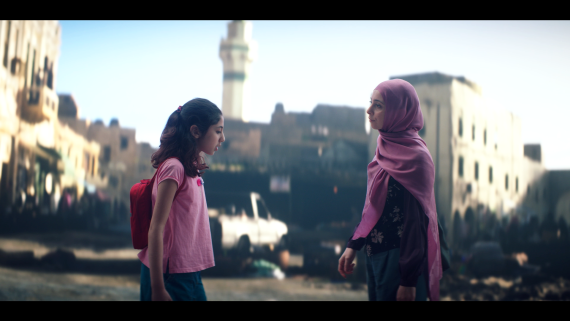 Kane Le-Petit : The first big thing to discuss is the new technology used in Fireworks. I saw an interview with you. I think it was in the behind-the-scenes of the making of the film. And, I noticed you said that when you were originally sort of presented with the idea of the film, you were a bit hesitant because you didn’t want to do another short, so was it the technological aspect of it that sort of brought you back? Or were there other aspects of the script that truly drew you in.

Annalise Davis : I’ve known Steve, the writer, for a long time, and I loved the script. I was very open to working with them, and the Fireworks script was always fantastic. I’ve made short films before – I’ve kind of exec-produced short films. I wasn’t totally against it. I thought, firstly, it’s not super challenging to me, and I also didn’t know how we could raise the finance on that script. It was not that it wasn’t a brilliant script, but I know the kind of films that the BFI and the main financiers make, and they don’t make this kind of film. So it was a sort of double-edged thing. And then we were talking, and I said “oh, wait, there could be a way” because it was essentially all set within a single location – a MI six ops room.

So it was all a very controlled, tight environment – very claustrophobic – which is hard to make interesting as a short film anyway. So that’s why we started talking about the technology of virtual production; I said “why don’t we look into AR and VR?” We sent Paul to the Story Futures Academy Bootcamp about 360-degree technology.

We realised we could make it as a traditional film that could be seen in cinemas, but use virtual production to show Tripoli in a different way. It was obviously much more interesting to me to have that challenge that nobody had ever done it before. Ironically, it was easier to raise the finance for that, even though it costs more than the average film because of the technology. So yeah, it’s a sort of double thing about doing something new and knowing that there was a route to getting the thing made that interested me, as well as a really great script and a really great team. 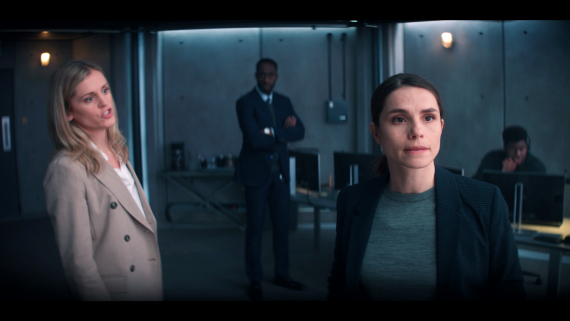 KL-P : Brilliant! When talking about the script specifically, I think after reading the synopsis and reading about the film prior to going in, the humour can be quite unexpected. It’s very funny, especially considering how serious the actual subject matter is. How important was that humour for you to sort of stay in the veins of the film?

AD : Well, when you have a Steve Laly script, it’s always got that humour. That’s what I love about his writing. I think it’s super important if you’ve got a film that’s essentially quite moralistic; it’s basically highlighting the issues around how casually these bombs go off, and how these people feel about it. I personally think that if you’re gonna tell a story that’s quite serious, the best way you can do it is by entertaining. And then, oh, look what we’ve done – We’ve told you a story that’s actually quite serious. So for me, humour – or at least being entertaining is really, really important. I like the challenge of telling a story that shouldn’t be funny – but is.

KL-P : Just quickly back to the technology side of things – in terms of actors and actresses being present on set, how different is the atmosphere or vibe as opposed to being on a physical set or just a flat out green screen?

AD : I mean, I think for sure it’s much more interesting for them than a green screen – They dunno what they’re acting against and it can be quite a deadening environment. So for sure, I think they really love the fact that they could see what they’re acting against. Although ironically, the people in the MI six-room aren’t meant to see what’s going on, I think especially for Pfizer and Saudi who are the triple E characters, it’s fantastic. Creatively, I think virtual production is leagues ahead of a green screen, ’cause it’s not just the actors – you can see what’s going on. It’s everybody; the crew, the designer and the DP. Rather than designing the physical world and then some VFX people come along afterwards, our designer was able to design everything you see. And I think that’s really fantastic. And the same for the DP – the DP loved it compared to the green screen because again, he was able to light it and he was able to see what was going on.

KL-P : Because obviously it’s still very new and in the experimental stages, do you think it will be something that is very much used in the future for productions all across the board?

AD : Yeah. I mean, I think it already is particularly being used for vehicles, which is great. It’s huge for vehicles cause it’s two different environments – you’re inside the car and outside the car’s virtual. I think it’ll be used more and more because it’s useful when you don’t want to go on location. Especially with climate change – you wanna minimise travel. The technology is still in its infancy, so I think for me it was really vital to be working with somebody like Paul Franklin, because he’s such an expert in the field. But I think as it becomes more evolved, it’ll be even more accessible to directors who don’t have two Oscars for the VFX work!

KL-P : In terms of your role as a producer – not just on Fireworks, but in the broad spectrum of things, what is it about the role that keeps you going? What do you love about it the most?

AD : Well, I love storytelling, and I like the variety of producing. You develop something with just a writer, then you bring people on and suddenly you are running a really big company with 1oo, 200 people and with a big budget. And then it goes to the edit and the music and then you’re distributing it. You never get bored ’cause there are so many different elements to it. I probably wouldn’t want to do just one of the elements – I like the fact that it’s all of them. It’s always challenging. 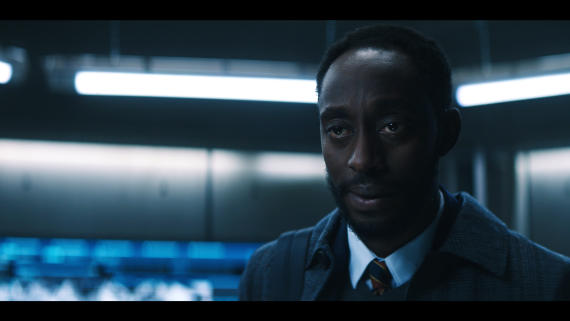 KL-P : With short films, as you know – you’ve worked on quite a lot of them – how important is it to get the right running time, in your opinion? You never want it too short, so you don’t have enough time to get invested in the story and the characters, but you never want it too long to the point where the audience are thinking, well, why isn’t this a feature film? It must be quite hard to get the pacing right.

AD : I think it’s really rare to find a short film that’s too short. I knew going into this that we should keep it under 15 minutes partly because of festivals, and also you just never wanna outstay your welcome. I’ve watched a lot of short films that are too long. I think pacing’s really important. It’s about keeping the energy up – especially with this film, this film is absolutely packed with plot and exposition. There are so many things happening and so it was really important that we help the audience through.

KL-P : How is Fireworks doing on festival circuits?

AD : We had really fantastic UK premier at the KSN Soho, which was brilliant. And then we just had our US premier last week, which was fantastic. It was really exciting and went down really, really well. What’s great is it launches in Tribeca and now other festivals are joining in. It‘s really just started its festival run!

Fireworks is available now to watch on Tribeca Home Pass.