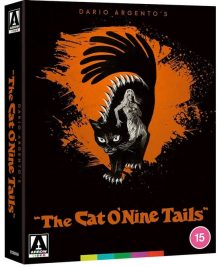 Following the success of Dario Argento’s first installment of his “Animal Trilogy” The Bird with the Crystal Plumage in 1970, it was only a year that fans had to wait until they were able to see his follow up The Cat o’ Nine Tails.  The movie introduces us to Franco Arno (Karl Malden) a retired, blind journalist who likes to spend most of his time completing crosswords and enjoying the company of his niece Lori (Cinzia De Carolis). On one particular evening, while both Franco and Lori are out walking the streets of Turin, they pass a car where Franco overhears a conversation with the topic of what seems to be blackmail. It is the next day that sets the story in motion when it turns out that a murder has happened, and it is here that Franco begins to think that what he heard from the conversation in the car the previous night might just be part of this case. Franco finds out that it is Carlo Giordani (James Franciscus) who is the reporter assigned to the murder, and with Franco’s keen interest in solving the crime and presenting evidence early on, Carlo knows that it is the right move for them to work together. 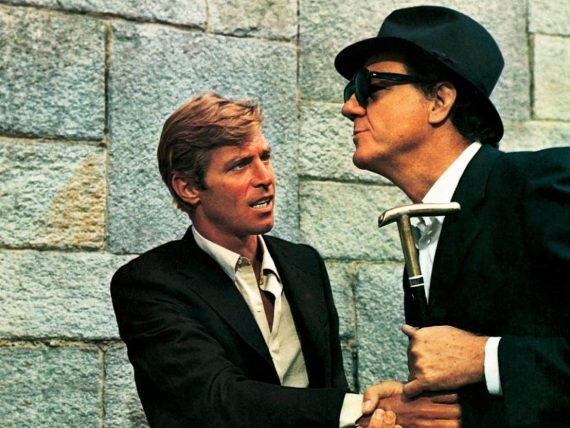 I have to say that The Cat o’ Nine Tails is a strange one. You can see what Argento was going for but there are times where the story just does not do it for me. It has the beats of being a Giallo movie but at times the plot tries to be smarter than it actually needed to be which results in a bit of a mess with it’s overall pacing. It is easily the weakest of the trilogy in my opinion. Even Argento himself has said that it is his least favourite movie that he has made because in ways he feels that it was too American in the end. I still have a good time watching The Cat o’ Nine Tails, and it genuinely has one of my favourite Argento death scenes which is a brutal scene involving a train, but it definitely has a good few issues overall. However, here we have another 4k release from Arrow Video, and it is actually pretty amazing that we are being treated to so much Argento in 4k. This is Arrow’s second Argento release, and we also have my personal favourite Deep Red on the way. I honestly have not been disappointed with any of their 4k releases so far and it remains the same with this. The Cat o’ Nine Tails has never looked better. The black levels, contrast, grain are perfect throughout. It honestly couldn’t be better. Argento fans are truly spoiled with these releases.

In terms of special features we are getting the exact same content ported over for the previous blu-ray release.

Audio Commentary by critics Alan Jones and Kim Newman – When you see these two names together for a commentary you know that it is guaranteed quality, and essential. Both of their knowledge of cinema and Argento is just insane. Do not skip this.

Nine Lives – (15 mins) An interview with Dario Argento. He discusses how he has good memories overall while filming the movie, especially during the shooting of the scene in the cemetery because of all the pranks that were being done on set. His time working in a newspaper factory, the famous train scene, the difference between working with Karl Malden and James Franciscus. He also touches upon seeing the full film and feeling disappointed. For a 15 minute interview, there is quite a bit of excellent stuff discussed.

The Writer O’ Many Tails – (35 mins) An exclusive interview with co-writer Dardano Sacchetti was recorded in 2017. I absolutely loved this interview. Dardano has such a great attitude in this. He chats about how he got into film, The Cat o’ Nine Tails being the first story that he ever wrote, his rocky relationship with Argento, and when he shifted gears changing style from Suspiria onwards. Focusing less on the script and plot ends, and focusing more on having more fantasy and horror.

Child Star – (11 mins)  An interview with actress Cinzia De Carolis. It is probably the weakest feature of the bunch. It is not at all bad or anything, but there isn’t really much to take in other than the fact that she has fond memories of Argento, his father, and the cast overall. She loved her time filming the movie.

Giallo in Turin – (15 mins) Angelo Iacono was Argento’s production manager for 7 of his movies. He discusses how Argento really wanted to shoot the movie in Turin, and goes into detail about shooting the car chase. 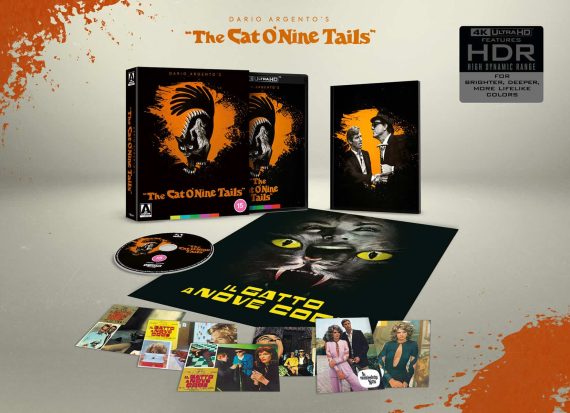 The Cat o’ Nine Tails isn’t a movie that I would consider essential Argento. But for collectors and fans, this release for an upgrade in quality with the Dolby Vision and HDR10+ encoding, I would highly recommend it.