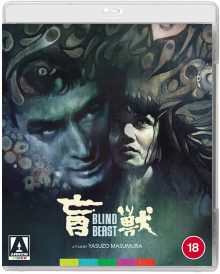 The Japanese director Yasuzô Masumura actually studied law in his youth but was always a big film lover so moved into filmmaking as an apprentice and studied it further in Italy before coming back to Japan to become an assistant director, working with Kenji Mizoguchi and Kon Ichikawa. He spent almost his entire career at Daiei studios until they went bankrupt, working extremely prolifically for the company, producing a wide range of films. This diversity makes him hard to pin down as an ‘auteur’ but Masumura has become regarded as something of an unsung hero of Japanese cinema of the era and Arrow have been celebrating the director recently with a steady trickle of Blu-ray releases.

In the late 60s, Daiei wanted Masamura to deliver something that fit the exploitation boom in Japanese cinema, as the company was struggling and, like others, were trying to deliver products that couldn’t be made for TV. Masumura suggested adapting a novel by the popular mystery/horror author Edogawa Ranpo (‘Moju: The Blind Beast’ from 1931), which they agreed to.

The resulting film, 1969’s Blind Beast, may have been more than Daiei bargained for and was not a commercial success but, over the years, has become thought of by many as one of Masamura’s finest films. As such, Arrow are releasing it on Blu-ray to add to their slowly growing collection of Masamura titles.

Having liked Masamura’s Irezumi a lot I eagerly got my hands on a copy of Blind Beast to review and my thoughts follow.

The film sees Mako Midori play Aki, a model who has become celebrated for her outré work with a particular artist/photographer. When visiting their latest exhibition, Aki comes across a blind man, Michio (Eiji Funakoshi), caressing a nude statue of her. Later on, that same man appears at her apartment as a masseuse who works for the company Aki hired to give her a massage after a long, hard session with her favoured artist.

Michio’s masseuse job is a ruse though and he uses chloroform on Aki and kidnaps her. He takes her to a remote warehouse, turned art installation, where he keeps her prisoner whilst using her as a model for his greatest work. Michio wants to create a new genre of art that focuses on touch rather than sight and he believes she has the perfect body and skin for his planned masterwork.

Aki is, of course, initially reluctant to do Michio’s bidding, but once she realises there’s little hope of rescue and believes he will release her once the piece is done, she goes along with it. She does, however, realise she has a certain power over Michio and uses it to try and gain the upper hand and escape. Michio’s mother (Noriko Sengoku), who assists him, doesn’t trust Aki though and attempts to get in the way of her seductive manipulation of her son.

Later on, Aki and Michio establish a new relationship though, one based on sadomasochism, and they take this to disturbing levels whilst cut off from the world in their strange prison.

Blind Beast is a curious, er, beast. Very much a chamber piece, being set almost completely in a single location with only three characters, it’s a claustrophobic, intense and minimalist film. It also gets very disturbing as it goes on, culminating in a particularly shocking finale that isn’t actually all that graphic but explains what is happening clearly enough and offers visual metaphors to retain a visceral impact.

I must admit, I didn’t warm to the film as much as I did Irezumi. This is largely due to personal preference over the genre, subject matter and style. I’m not really into the pinku genre, which this vaguely fits into, and I’ve always found films about women taken hostage and tortured or abused too unpleasant for my tastes. However, there was still much to appreciate in Blind Beast and I found myself drawn to its twisted world more than I might have been in the hands of a lesser director.

For one, Blind Beast is visually striking. Shot in a gloomily low-key fashion, the huge, elaborate sculptures of body parts that adorn Michio’s installation give the film an expressionistic feel and provide an oppressive fetishistic backdrop. Their presence and symbolism certainly aren’t subtle, but this isn’t a film to pussyfoot around the subject of sex and the statues add a grotesque, almost blackly comic tone to proceedings.

The film is also thematically rich and fascinating. As with Irezumi, it presents a power struggle between the sexes and regularly shows different sides taking the upper hand. There are also questions about what is art and where does inspiration come from. The inclusion of the mother character adds a Freudian, Oedipal aspect too. As the film moves on though, it looks deeper into sensuality and the link between pleasure and pain. When Aki and Michio have spent too much time exploring each other’s bodies, the only way they can experience new, exciting sensations is through inflicting pain on one another. This idea is most intriguing, though it takes the film into some deeply disturbing territories, so doesn’t make for easy viewing.

These various ideas make for a peculiar film that’s very much open to interpretation. A twisted study of art, pleasure and sensuality, among other things, it’s puzzling and disturbing yet strangely intoxicating. It’s not an easy one to recommend but those with an open mind and bold tastes will find much to admire.

Blind Beast is out on 23rd August on Blu-ray, released by Arrow Video. The picture quality is slightly disappointing, after the mightily impressive Irezumi. It looks a little soft and lacking in detail. It has quite a murky look too, though I imagine this is as intended. It’s a clean print though and is still decent, even if it doesn’t look as exceptional as some other Arrow releases. The images used throughout this review are screengrabs from the disc, to give examples.

The audio is solid though. I had no issues with that.

Earl Jackson’s commentary is quite dry and academic but rewarding if you have the patience for it. I felt he spent a little too much time discussing similarly themed films though.

The ever-reliable Tony Rayns provides background on Masumura’s career and the film itself.

Seth Jacobowitz’s video essay is only short, at 10 minutes, but offers some intriguing thoughts on the film.

It’s a decent package for a fascinating and striking film. Fans of the director and extreme Asian cinema should definitely give it a try.