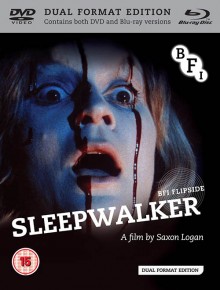 A bickering wealthy couple visit another less successful, but equally bickering, couple who live in a decaying family home. The evening starts off badly with a broken window essentially ruining the home-cooked food, and things go from bad to worse as the couples bitch at each other over dinner while out at a fancy restaurant, and much later as the guests fall victim to an unhinged attacker.

Like many older British horror films Sleepwalker manages to creep into your inner psyche without you realising at the time. I have to admit that, although I’m a fan of British horror, particularly from the 60s and 70s, while I was watching Sleepwalker I wasn’t especially impressed, but the more I thought about it afterwards the more I realised that it was better than I’d initially thought it was, if you see what I mean…

Like many British horrors from the early eighties the film conjures up a pseudo gothic atmosphere and you can clearly see where Saxon’s influences lay, namely Mario Bava, Dario Argento and the Hammer films that preceded and succeeded them. The lighting, in particular, is reminiscent, at times, of some of Argento’s earlier work.

The film is a barely veiled satire on British society at that time with socialist and capitalist at each other’s throats, each claiming a moral or pragmatic victory over the other’s conflicting viewpoints. The characters represent different factions within society as a whole and, although I found some of the dialogue a bit dated, for the most part the film puts across its point well.

I’ve got to say here though, as a horror film Sleepwalker doesn’t really work – any genuine suspense is shattered by over use of weird dream-like sequences, and the violence seems a bit too ‘kitchen-sink drama’ for today’s jaded audiences. 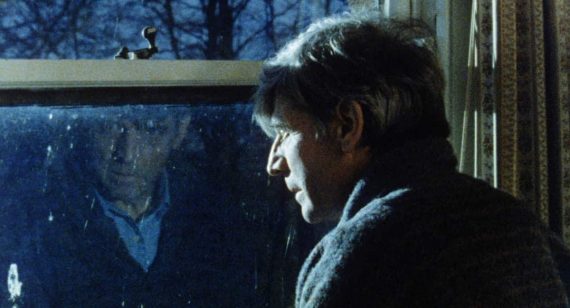 However, the film has merit as a black comedy and as a social commentary. It has plenty of period atmosphere and really nails the time and place it exists in, as so many British horrors of that era do. The general atmosphere is helped enormously by an excellent soundtrack, which sounds like something that John Carpenter might have rustled up in between making a couple of his own films.

Unfortunately, what it does share with most horror films is a lack of sympathetic characters. To put it bluntly you wouldn’t really want to share a taxi with any of the main protagonists here. The rich man is an arrogant businessman who cares little for anything but his own status and his girlfriend is almost as bad as she fails to challenge him. And the couple who they are visiting are irritating at best. I think the most likeable characters in the film are the waiters at the restaurant and the old man who is also a diner at the restaurant.

Sleepwalker is worth a watch as a curiosity piece from a time when it was easier to get films made, films that actually tried to ‘say’ something meaningful.

The BFI have done an excellent job at sprucing this up and have gone way beyond the call of duty when it comes to sourcing extras to accompany the main film.
Additionally they’ve produced a very readable and interesting booklet to accompany the piece, which provides some fascinating information and background to the films included in the package.

Included in the package are two other Saxon Logan shorts, Stepping Out (1977) and Working Surface (1979). Both are worth checking out, although I’d recommend viewing the feature-length interview with the director before you watch them, as the background to the shorts really helps one to appreciate them more. And, talking of the interview, this is definitely worth checking out, particularly if, like me, you have a genuine interest in how films get made and learning about the overall creative process. A few more stills and film clips during the course of the interview wouldn’t have gone amiss though. The package is rounded off with the inclusion of The Insomniac (1971), a short by Rodney Giesler, which I have to say I quite enjoyed even though it’s basically one long weird, slightly trippy, dream sequence!