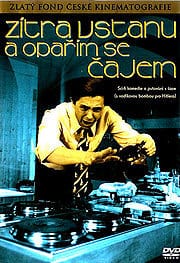 It’s always a wonderful experience to finally see an acknowledged classic of cinema and discover that its reputation is well deserved. I still remember the first time I was blown away by Citizen Kane,the night I first watched Taxi Driver and the experience of falling in love with Charlie Chaplin. But perhaps an even greater thrill for the cinephile is the discovery of a completely overlooked classic, something you’ve had to work hard to unearth and which fills you with the satisfying sense that you’re one of the few people in the world who has seen this lost gem. The subsequent joy of introducing these discoveries to others and watching them light up with the same sense of wonder and excitement is an unrivalled pleasure for the film enthusiast.

My most recent experience of this kind came courtesy of Jindrich Polak’s Czech sci-fi comedy Tomorrow I Will Wake Up and Scald Myself With Tea. The strange history of this film’s miniscule cult following is just one of the many bizarre delights that make it so fascinating. On 16 January 1982 (a little under half a year before I entered this world), BBC One’s scheduled airing of Match of the Day was delayed and football fans were left with time to fill and only three channels to choose from. Oddly enough, the other two channels were both premiering sci-fi films. ITV was showing American space thriller Capricorn One but the more adventurous BBC Two opted to give Tomorrow I Will Wake Up and Scald Myself With Tea its first and only British screening. As a result, the film has developed an unlikely following among a small group of specific football fans who found themselves drawn into the film’s strange and captivating world, so much so that many forsook their beloved sport to see the end of Tomorrow I Will Wake Up and Scald Myself With Tea!

It’s hard to imagine a time when there were only three TV channels to choose from (I grew up with the luxury of four) but it’s even harder to imagine a time when any of them would schedule a Czech sci-fi comedy that never had a British release, in a prime-time slot. Whatever inspired this commendably adventurous choice, Tomorrow I Will Wake Up and Scald Myself With Tea was never repeated on British TV again and was never given a British video or DVD release. Fortunately, thanks to the semi-legendary status this one screening has given the film amongst a small group of people (many of whom presumably remain convinced they dreamed the whole thing), Tomorrow I Will Wake Up and Scald Myself With Tea found its way into my consciousness and I was suitably intrigued that I sought out a copy via a Czech website. I’m so very, very glad I made that effort.

The problem with synopsising Tomorrow I Will Wake Up and Scald Myself With Tea is that it is virtually impossible to encapsulate the film’s unique atmosphere in words. Every review I’ve read (and, I imagine, the one I am in the process of writing) has made the film sound like a campy, ludicrous piece of throwaway fluff full of tacky, cut-and-paste sci-fi ideas and goose-stepping, Mel Brooks Nazis. But that is not the case at all. Bear that in mind while reading this plot outline: The Universum Company offers rich tourists the chance to travel through time in rockets to observe moments from the past. The tourists are sealed in the rockets so that they cannot interfere with the past and risk creating alternative futures. However, a group of elderly Nazis who have survived and stayed relatively youthful in appearance through the use of anti-aging pills, intend to abuse the technology to return to Germany in 1944 and offer a desperate Hitler the hydrogen bomb, thereby making him invicible and creating an alternate timeline in which the Nazis emerge victorious. The elderly Nazis bribe a pilot named Karel (Petr Kostka) to help with their scheme but on the morning of the intended voyage, Karel chokes to death on a bread roll. Witnessing this, Karel’s usually strait-laced, identical twin brother Jan (Kostka again) seizes the opportunity to step into his brother’s shoes and acquire the job he envies and the girlfriend he secretly desires. This impulsive decision has disasterous repercussions for all involved, ultimately forcing Jan to flit backwards and forwards through time in an attempt to sort out the mess he has caused. All this is without even mentioning the family of rooftop circus performers, the suitcase full of underwear, the futuristic bleach that destroys everything it touches and the paralysing pepper-spray that turns its victims green for a short period of time. 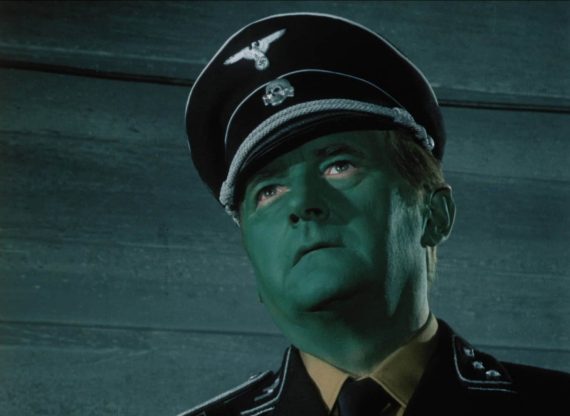 This synopsis surely sets up expectations of excessive wackiness and the wonderful opening credits, in which real footage of Hitler has been manipulated to give the impression that he is dancing to music, do little to dispel this. However, once Tomorrow I Will Wake Up and Scald Myself With Tea gets going it becomes clear that it is far more cleverly satirical and narratively impressive than its outlandish title implies. Crucially, the film never tips us the wink or draws conspicuous attention to itself. Polak is totally dedicated to telling his story and plays the whole thing straight, encouraging his game cast to do the same. The clearest reference points which possibly influenced the film are the original incarnation of Doctor Who and Michael Crichton’s Westworld but Tomorrow I Will Wake Up and Scald Myself With Tea predates most screen examples of this time-travelling, history-changing plotline, such as Back to the Future Part II or Primer. It’s doubtful that Tomorrow I Will Wake Up and Scald Myself With Tea actually influenced these films but as an early example of this kind of visual narrative, it is undeniably a more important movie than its reputation suggests.

Time-travelling tales such as this have a (sometimes unwarranted) reputation for being overly complex but Tomorrow I Will Wake Up and Scald Myself With Tea is directed so expertly that only the most easily-distracted of viewers could lose the thread. Polak uses a series of visual and musical cues to make sure we always know where we are in the timeline. The titular tea-scalding and a dangerous flying knife are memorable bookmarks but best of all is Karel Svoboda’s wonderful time-travelling theme, an infectiously upbeat synthesiser ditty which transcends its initial ridiculousness to become an uplifting, endlessly-amusing hook. 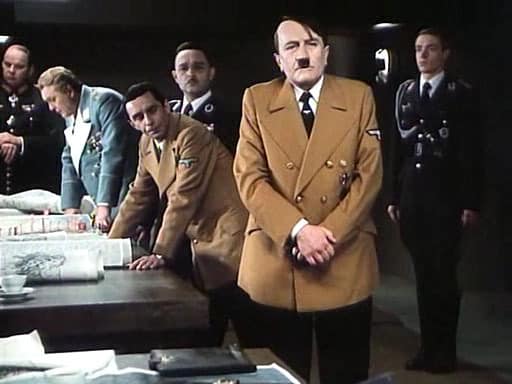 Petr Kostka is solid in the central dual role but standout performances come from Jiri Sovak as the head of the elderly Nazis and Frantisek Vicena as Adolf Hitler himself. Both shine in a supremely funny, extended comic setpiece in Hitler’s bunker in which the seemingly foolproof plan comes unpicked little bit by little bit. Sovak does one of the best comedy reactions to escalating disaster I’ve ever seen, exquisite in its understatement. It’s perhaps the defining performance of the film, tackling the potentially zany chaos with measured dignity instead of wild mugging. Vicena, meanwhile, is one of the most effective screen Hitlers I’ve ever seen, certainly in a comedy film. The surprising twist here, especially after he was so roundly mocked in the opening credits, is that the Hitler role is almost entirely straight in both writing and performance. During the comedy moments, Hitler is merely the revered figure whose disapproving presence heightens the Nazis’ humiliation. But it is in a deadly serious moment that Vicena truly shines, as Hitler views images of his imminent downfall via a futuristic projection device. The resultant disbelief, panic, denial and impotent anger Vicena displays is an incredibly powerful moment, especially in juxtaposition with the major comic stretch that proceeds it.

In the post-Hitler’s-bunker scenes, Tomorrow I Will Wake Up and Scald Myself With Tea heads in another direction and the major reference point seems to switch from children’s TV sci-fi shows to classic French farce, as Jan sets about putting right everything that has gone so badly wrong. Although there are one or two small plot holes (as there so often are in films of this kind), by now the viewer is so engaged by the film’s own brand of logic that they pass without question and the neat resolution is satisfying and uplifting, in keeping with the tone of the film. Small ideas that seemed like throwaway gimmicks come back to feature in the plot and recast our opinion of earlier scenes as we begin to realise how tight this film is. It’s a film of many diverse and interesting ideas but ultimately, nothing is there without a good reason.

I sat down to watch Tomorrow I Will Wake Up and Scald Myself With Tea expecting an interesting curio and, as the hour and a half flew by, my heart swelled at the experience of discovering an overlooked classic. I was left with a real sense of privilege at being one of the few people to have seen this gem, as well as a head full of names of people to whom I must show this fascinating, bizarre but instantly accessible and phenomenally enjoyable movie. I look forward to the endless joy that sharing this film with others will bring me. Perhaps someday the BBC will see the light and repeat it again but until that day I’ll be thankful for those ten minutes I spent navigating that Czech website and consulting online currency converters!

* Close to 9 years after this review was written, Second Run have released the film on Blu-ray and DVD in the UK. Read David Brook’s review for full details.