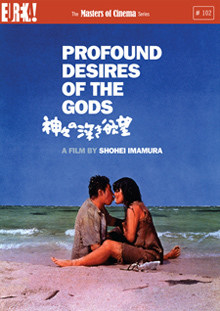 Eureka’s Masters of Cinema series are releasing three films from Shôhei Imamura on October 24th, A Man Vanishes (1967), The Ballad of Narayama (1983) and this, Profound Desires of the Gods (1968). After catching Imamura’s Vengeance is Mine recently then working through most of these (I’m yet to watch Narayama), he’s fast moving up my list of favourite directors. His films aren’t instantly gratifying or easy to watch, but they’re fascinating, rich and experimental without being totally unfathomable. Saying that, I’m having trouble expressing my feelings towards Profound Desires of the Gods. I wrote five pages of notes whilst watching the film (a personal record), yet these mostly concern the actions on screen I felt were important rather than thoughts on its quality or success. My reviews tend to focus on the nuts and bolts of why a film works (or doesn’t) in my eyes, probably due to my technical filmmaking background, but it’s not as straightforward as that this time, so bear with me as I try to channel my inner film-theorist.

Profound Desires of the Gods marked the end of an era for Imamura. It was the last film he made for Nikkatsu due to it spiralling over budget (the film took a whole year longer to shoot than expected) and its subsequent failure at the box-office. It was also the last cinematic feature film he made for around ten years, instead working on documentaries for television. With its epic length (close to three hours), persistent use of real locations and erratic storytelling, it’s not hard to see why it was so difficult a production for those involved and unpopular with a regular cinema-going audience. Nonetheless, it makes for fascinating viewing now, for those with a taste for it.

The film is a prime example of Imamura’s fascination with the ‘primitive’ as well as those thought to be on the lower-rungs of society. Set on Kurage, a fictional island in Okinawa (yet shot on a real island in the region), Profound Desires of the Gods centres around the Futori family. They are supposedly the oldest family on the island, yet the most derided due to their ‘backward’ nature and incestuous relationships. As most of the islanders begin to move with the shifting times, converting their paddy fields to sugar cane and allowing hints of capitalism to corrupt their way of life, the Futoris spend their days digging a great ditch in the hope that the Gods will let the giant boulder on their land fall into it, helping irrigate the fields and allow them to start their own paddy field. With this, they can offer rice to the Gods and the town to become accepted once again. Meanwhile, an engineer from Tokyo is shipped in who has been ordered to dig a well to nurture the sugar cane plantation owned by the company he works for. He is of course worlds away from the island’s inhabitants, yet gradually grows to be part of the surrounding culture after falling for Toriko, the mentally challenged daughter of the Futori family. This disrupts the island’s livelihood though and village elder Ryu Ritsugen does everything in his power to get what he thinks is best for the island (and himself).

Opening with big close-ups of fish and other natural wonders around the island, then observing the fairly feral son Kametaro grab one up out of the water, I felt a sense of Malick’s fascination with man’s relationship with nature, but Imamura takes things to a more naturalistic level. He doesn’t share the slightly rose-tinted, poetic viewpoint of Malick. You don’t hear sonnets being recited over visions of children playing in sunlit cornfields (no offence to Malick, I love his work, but he can become a parody of himself at times). That’s not to say Profound Desires of the Gods is a grimy or unpleasant film. It looks stunning and the characters are largely quite likeable in a way, but there are dark aspects to the inhabitants and their surroundings. Everyone in this film has their share of flaws and Imamura is unflinching in presenting them. He approaches his subjects from an observational point of view. His films are occasionally described as works of anthropology and this could be attributed here although it’s no cold, scientific affair. Rather than thrusting his characters into a clear-cut plot or wedging them into big dramatic situations, he lets them live in their world as they would. This doesn’t lead to a slow-moving film with little happening though. It’s surprisingly dense in terms of actual ‘occurrences’ – quite a lot happens in its three hours, there’s just not an obvious hook that you would get in a more conventional film. This can be seen by many as being messy, Imamura himself has stated that he likes making ‘messy films’, but for me it helps maintain its naturalism and makes for a unique experience.

As messy as the film can seem it does have clear themes and messages. Obviously the corruption of capitalism and ‘civilisation’ on nature and tradition is prevalent. The film’s coda, set five years later when the town becomes a tourist destination, makes quite potent use of the Coca-Cola brand, as does a moment earlier on in the film when the engineer, delirious with the heat, sings an advertising jingle for the soft drink. The film’s final moments that reveal how the Futori family’s tragedy has become part of the island’s folklore, described to tourists as ancient, superstitious tales, were rather haunting too. They also provide a fitting and poignant metaphor for the intense connection they had to the island. Despite showing some of the more disturbing aspects of life there, it’s no secret that Imamura has a fondness for their natural and ‘primitive’ way of living.

Spirituality plays a big part too (hence the title). Some of the film’s darkest scenes concern Ryu’s attempts to force his mistress (and Futori family member) Uma, who is a town Noro (a sort of shaman), into fabricating prophecies that benefit himself and the island’s business. We also often hear tales of the island’s Gods told largely through a disabled beggar who sings folk-songs to the children. This brings to light the issue of incest, which plays a big part in the film. The legend is that the island was formed from discarded objects thrown down from the heavens by a pair of brother and sister Gods in the throws of an incestuous relationship. The view of the islanders is that mere humans are not worthy to do as their Gods and such inbreeding is forbidden. The Futori family cannot hold back their primitive desires though and Nekichi, the eldest son and father to Kametaro and Toriko, longs to take his sister Uma away to a neighbouring island to make her his wife. This leads to a violent and disturbing conclusion that unveils the merciless dedication the islanders have to their traditions and beliefs.

As I’ve made quite clear, the film is not for everyone, but if you can get past the bum-numbing length, peculiar style and vaguely messy flow of its storytelling then you will find a rich and curiously engaging experience waiting for you. And if the film manages to make that connection, like me you will probably want to track down more of Imamura’s work. I’m certainly pleased I’ve been sent three of his films to review all at once, so keep an eye out on the site over the next week or so for a couple more (probably quite glowing) reports.

Profound Desires of the Gods is released on dual format Blu-Ray & DVD as part of Eureka’s Masters of Cinema series on 24th October. The picture quality is staggeringly good. On Blu-Ray it looks like it was shot yesterday, there is no sign of damage or ageing at all and the colours on the daytime exteriors are bold and vibrant without looking processed. There aren’t many features so to speak, just a trailer and an extended introduction from film scholar Tony Rayns (which nicely fills in the background of the film and its setting), but as with all of the Masters of Cinema releases there is a lengthy (44 page) booklet included. This is as good as a making-of documentary, with a further essay on the film from Rayns, two statements from Imamura himself and a transcript from his introduction and Q&A at a 1994 Edinburgh International Film Festival screening of the film. It’s fascinating stuff, far more insightful than the back-slapping fluff we get on most Hollywood produced DVD’s and Blu-Rays. A must buy for fans of Imamura and unusual, thought-provoking cinema in general.