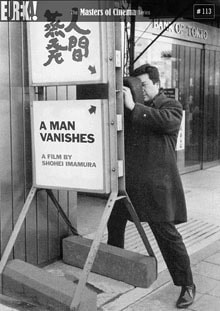 My Shôhei Imamura triple bill continues with his experimental semi-documentary A Man Vanishes. Back in February, the Movie Club Podcast did a triple bill discussion of F For Fake, Exit Through The Gift Shop and Catfish, three films that (supposedly in Catfish’s case) toyed with the idea of fact and fiction and what was acceptable as ‘truth’ in terms of documentary filmmaking. Well, they really missed an opportunity there because A Man Vanishes, produced well before any of these films, is a bold, thought-provoking dissection of pretty much the same thing. It certainly lays it’s cards on the table more clearly than Catfish, which I still believe is largely constructed as a fully fledged documentary, but we won’t get into that argument now.

Back in the mid to late 60’s, Imamura was planning on producing a TV documentary series following 26 original missing persons cases. In Japan at that time, with the economy growing rapidly, a large number of young people were heading for the cities and many, seemingly due to dreams of success and happiness being crushed, were going missing, often never to be found. Around the time in Japan it is thought that around 90,000 people would go missing every year. Of these, between 5,000 and 7,000 would never be found and were declared ‘vanished without a trace’. Imamura found this phenomenon fascinating and wanted to delve into what caused these disappearances. What could drive a man (or woman) to leave their whole life behind them and fade away into the ether. 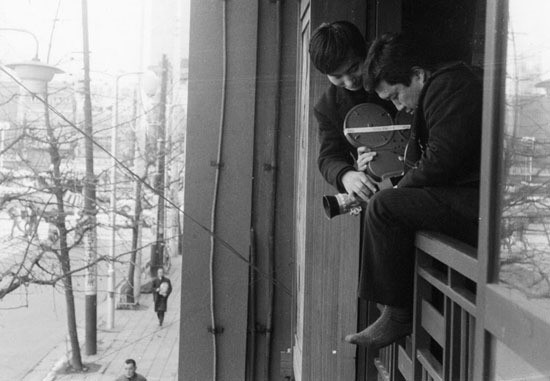 As he began his research however, he came across Yoshie Hayakawa (whom he nicknamed ‘The Rat’). Her fiance Oshima Tadashi had gone missing and Imamura found this woman strangely interesting. He confesses that he didn’t particularly like her, she was “haughty and self-centred”, yet it was this very nature that he thought would help make the film more interesting even if the search for Oshima led nowhere. So he decided to drop the idea of an epic TV series (which would have been a ludicrously difficult undertaking anyway) and focus on one story for a feature length film.

What makes the film so experimental and groundbreaking though is the approach that Imamura took to producing it. Yoshie didn’t so much agree to be featured as part of the documentary, rather she was ‘hired’ to star in it. She reportedly turned up to each day’s shoot as though arriving to work. This performance aspect was furthered by the fact that the reporter accompanying Yoshie on her search is actually an actor (Shigeru Tsuyuguchi). So although Yoshie had actually lost her husband and we do speak to members of their family, friends and neighbours, we aren’t sure to what extent the scenes we witness are actually fabricated or not.

The rabbit hole is further deepened as the plot stops unfolding, takes a bit of a U-Turn and then completely unravels, falling apart at the seems. In the first half of the film we are inundated with a vast amount of suggestions as to what happened to Oshima from various sources. Scandals are unveiled as we hear of how he embezzled money from his work and it is suggested that he had relationships with a number of women. We even witness a medium channeling his spirit, pulling out further theories (this creepy doc-horror segment could be a precursor to Blair Witch perhaps?). However as the film progresses we stop focusing on Oshima and turn on to Yoshie herself and her relationship with her sister and co-star Shigeru. The filmmakers and audience start to wonder if anyone will ever find Oshima at all and by the end we give up. As the investigation degenerates into a ‘yes you did’, ‘no I didn’t’ face-off between Yoshie and her sister, the film even gives up it’s documentary facade, the walls literally being pulled away, revealing the set around the ‘actors’. It’s as though the whole film falls apart and draws the conclusion that ‘only Tadashi knows what happened’. 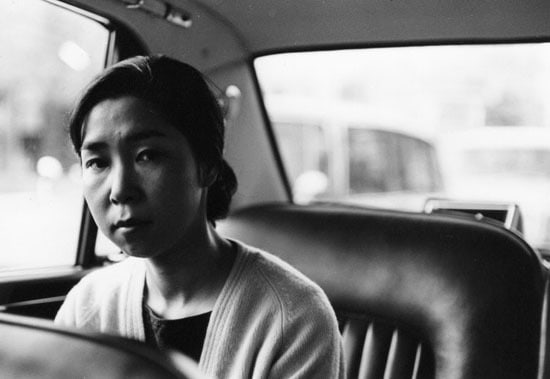 It’s a difficult film to rate for this reason. In many ways it’s a failed experiment – even Imamura agrees to an extent in an interview included on the DVD. He never set out with a clear view of how the film would end and it took on a life of it’s own then folded in on itself. Nonetheless it creates an undeniably interesting film that documentary makers and theorists owe it to themselves to watch. In form alone, melding the ‘real’ with the ‘fake’ is achieved to great effect here. In it’s use of a variety of hidden cameras and microphones the film has a darkly voyeuristic feel and a boldly abstract editing style (due in part to an inability to sync many of the visuals with the audio). You also get the impression that although Imamura’s film may not have played out as he originally intended, he still knew how to shape it into a fascinating probe into the nature of truth.

A Man Vanishes is released on DVD as part of Eureka’s Masters of Cinema series on 24th October. The picture and sound quality is rough, but this is clearly due to the source material. It’s been cleaned up enough to be clear and I imagine represents the film as accurately as possible. Features include a short but revealing interview with Imamura himself (by his son strangely) and an 18 minute interview with Tony Rayns in which he delves deep into the background of the film and suggested interpretations. To complement these already strong additions we are treated to the Masters of Cinema’s usual collection of essays and interviews housed in an accompanying booklet. As ever this is extremely informative and helps make the DVD a highly recommended purchase.