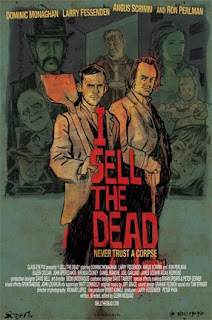 I Sell the Dead is (so I’m told) a throwback to the old Hammer and Amicus horror films, serving up thick slabs of gothic, hammy horror without taking anything too seriously. Having barely watched any authentic Hammer horror films (a crime I’m sure in some circles), I’m probably not the right audience or critic to be watching and reviewing this. I’m not warning you that I’m going to lay into the film, I just think that others might appreciate it on a different level. In fact I quite enjoyed it, but anyway, let’s get on with things…

The film is told mainly through flashback as grave-robber Arthur Blake (Dominic Monaghan) tells his grisly story to a priest (Ron Perlman) during the final night before his execution. We learn of his exploits with friend and business partner Willie Grimes (Larry Fessenden) as they move from petty thieves to dealers in the undead. It’s a daft and quite fractured narrative, but works well as a series of fun vignettes. Don’t look for logic or character development, just go along for the ride and you won’t be troubled.

It’s a lightly entertaining romp despite the grim subject Buy Bactrim Online Pharmacy No Prescription Needed matter, with most of the film played for laughs. It’s never hilarious, just consistently likeable, which makes for a film that is easy to watch but difficult to really love. The cast all seem to be having a great time, and provide enjoyable performances. Some of the accents are a bit laughable for the wrong reasons (Ron Perlman especially), but it’s all part of the hammy charm I guess.

Visually the film looks great, with the attractive period setting making a welcome change to the grimy or overly slick looks of modern horror films. A lot of work has clearly gone into making it look like a classic gothic horror, and the special effects match it by never looking overly realistic, adding to the dated Hammer feel.

At the end of it all though, as fun and pretty as it is, I Sell the Dead never has enough impact to really be all that memorable. It’s entertaining while it lasts, but I don’t think I’ll be rushing to see it again.