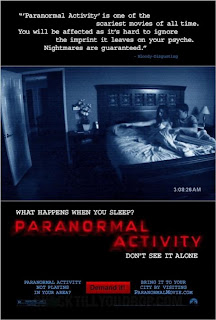 I imagine most of you will have heard about Paranormal Activity by now, but I managed to watch it before I’d really read anything about it, which is always a good thing in my opinion, especially with regards to horror films. In my opinion, the hype is fairly justified. OK so it’s no masterpiece, but it really did scare the hell out of me, and to manage that in a weekend of watching 13 horror films is quite an achievement.

Paranormal Activity is similar to the Blair Witch Project in a lot of ways, as I’m sure thousands of people have already pointed out. Like that, Paranormal Activity is ultra low budget, portrayed as ‘lost footage’, has a minimal cast and locations (all in one house) and is a real ‘love it’ or ‘hate it’ experience. It’s an incredibly basic film, especially with regards to it’s plot, if you can call it that. The whole film really just ‘documents’ a couple’s experiences in a seemingly haunted house. The structure is basically a gradual build up in the severity of the paranormal activity (of course) going on.

It’s quite a repetitive film, but the director uses this to his advantage, creating unbearable tension in the night scenes which always open on the same static shot of the couple in bed. Your eyes are forced to scour every pixel of the image looking for the next movement or shadow to appear. This shot burns into your memory by the end of the film, and still sends a Buy Topamax Online Pharmacy No Prescription Needed chill down my spine as I write this review.

The other key to the film’s success, as with all good horror films, is the soundtrack. There’s nothing fancy to hear and no music at all, but the location sound feels more real than the over polished audio of Cloverfield, and when things start to go ‘bump’ in the night you really feel it.

Yes, there is no story, the characters are at times annoying and some of their actions are frustrating, but as an exercise in sheer terror, you can’t get better than this. It really is the scariest film I’ve seen in a long time, and I’d recommend any horror fan to check it out. Just bring a change of underwear.