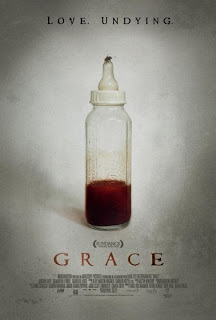 Maybe it was the fact that I’d already sat through 12 back-to-back horror films before watching this, but I felt like I wanted to like Grace more than I actually did.

It begins with a couple, Madeline and Michael Matheson, who are about to become parents and their problems in finding a way to bring it into the world in line with Madeline’s natural and organic view of life against Michael’s domineering mother’s devoutly traditional ways. A car accident changes everything though, leaving Madeline a widow and seemingly killing the baby inside her. She still insists on delivering it though and miraculously it arrives into the world alive. Just as things seem to be going well however, Madeline learns that her child, Grace, is not quite normal.

It’s a dark and disturbing film with an interesting concept, but for me nothing really settled. It’s well made, looks good and is well performed, but it just felt unpleasant rather than powerful and was a little too slow-moving for my liking.

Although the ‘evil baby’ premise sounds ridiculous, the film takes matters very seriously, and this actually works, only one or two moments felt silly. However, it’s seriousness doesn’t help the fact that it’s a difficult film to enjoy. On a metaphorical level too, the film wasn’t quite as effective as it wanted to be, with some ideas handled very bluntly.

It’s an odd film, not a bad one, but an unsatisfying and unlikeable experience. I imagine many people will get more from it than I did, but I found it to be a slightly disappointing ending to an otherwise fantastic festival.