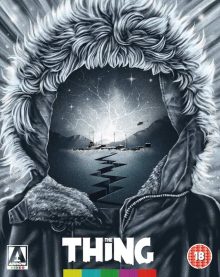 Released in a summer packed with sci-fi/fantasy blockbusters, including the phenomenally successful E.T., John Carpenter’s The Thing bombed at the box-office. Audiences clearly weren’t in the mood for such a downbeat and gruesome film in 1982 and critics weren’t enamoured either. 35 years later though it’s regarded by many (including me) as one of the greatest horror movies ever made. Quite when this shift occurred I don’t know, but something knocked some sense into film lovers along the way. The Thing has been released in many different formats and ‘special edition’ sets over the years, but it’s now got in the hands of Arrow Video, who have risen to the highest ranks of UK home distribution and treat every film they put out with the greatest care and respect. So of course, the news of this acquisition was cause for much rejoicing and I was thrilled to be one of the first people to get hold of a copy of their new Limited Edition Blu-Ray to review.

If you’ve not seen The Thing, what the hell is your problem? Go out and buy this now. Sorry, I meant to say, if you’ve not seen it, the film is set on a remote Antarctic research station. One day, the work of the group of men there is interrupted by a Norwegian helicopter flying overhead with one of the passengers shooting at, then dropping grenades on, a husky dog. An accident kills one of the passengers and blows up the helicopter, then when the remaining Norwegian shoots at one of the research party, they are forced to shoot back, killing him.

The researchers really should have let the Norwegians kill that dog though as it’s actually a shape-shifting alien that slowly assimilates the team members, one-by-one. Due to it being able to perfectly replicate the forms of other creatures, nobody knows who has or hasn’t been killed and turned into ‘The Thing’. This leads to mistrust and paranoia within the camp and messy ends to most of their number whenever the creature chooses to let itself be known and claim its next victim. 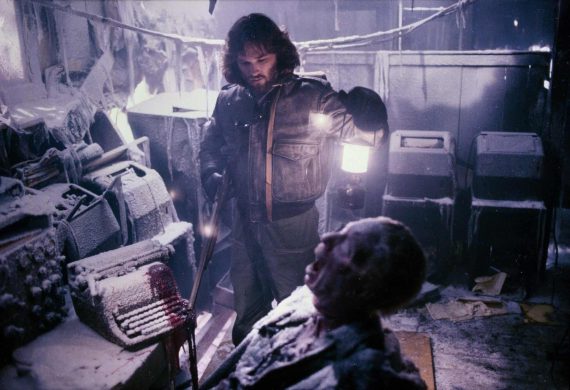 Much talk is made of the special make-up effects of The Thing, and indeed they are great and I’ll discuss them later, but there’s so much more to enjoy and appreciate here. For one, it’s a masterclass of on-screen paranoia and tension. In between the gory set-pieces the film is largely quiet and slow-burning, with the never fully answered question of who can or can’t be trusted ever lingering in the back of your mind. This tension is best demonstrated in the legendary blood test scene, which contains everything you want in a horror film in one fairly straight-forward 5 or 10 minute sequence. MacReady (Kurt Russell), who, we are lead to believe, is more than likely one of ‘Them’, is forcing the remaining team members to take a blood test to see who’s human. We have unbearable tension as MacReady burns each blood sample one-by-one with a hot wire, then a hugely successful jump-scare when one of the tests fails, followed by a mind-boggling scene of brutality to satisfy the gore-hounds. It’s that initial build that helps it all pay off and the film is full of this tight winding up of tension, aided by the heartbeat-like pulse of Ennio Morricone’s superb synth-heavy score (which is clearly inspired by Carpenter’s own soundtrack work).

It’s not all moody, slow build up though. The shit often hits the fan and does so in a spectacular fashion that I’m not sure has ever been truly matched in terms of sheer audacity and imagination. The set pieces pushed the boundaries of what was possible with practical effects. They might not always look perfectly realistic, but the forms the creature shifts into are so warped and freakishly unusual this doesn’t matter. Plus, because the effects were done on set, they feel real and you can practically smell the blood and gore splashed across the screen. It’s one of the most impressive gore-movies ever made and the effects still stand up unlike a lot from the time. The level of gore and disturbing nature of it all is likely what put off audiences and critics at the time. Few horror films were this overtly extreme back then and certainly none so realistic-looking, so it was likely too shocking for mainstream movie-goers.

There have been plenty of gore-heavy movies since, but very few, if any, are as exceptionally well made as this. As usual, Carpenter and his DOP Dean Cundey make the most of every beautifully wide frame. Composition has always been one of Carpenter’s great strengths. Whether working on a micro-budget or with studio-backing (as he had here), he always makes sure his films look as cinematic as possible. There’s plenty of eerily graceful movement too as the camera weaves around the claustrophobic research station. Here the lighting is nice and moody too. Moments that break out of the building also make great use of the great white lonely expanse of snow around them. Performances are solid too, with a handful of character actors making up a wonderful ensemble cast, with the ever reliable and charismatic Kurt Russell heading the bill.

It’s a full on masterpiece in my books, whichever way you look at it. As a moody psychological thriller it’s fantastic and as a balls to the wall splatter fest it’s also incredibly successful. Very few horror films have pulled off such a feat. Classy, yet shocking, it blows me away every time I see it (and I’ve seen it a lot). 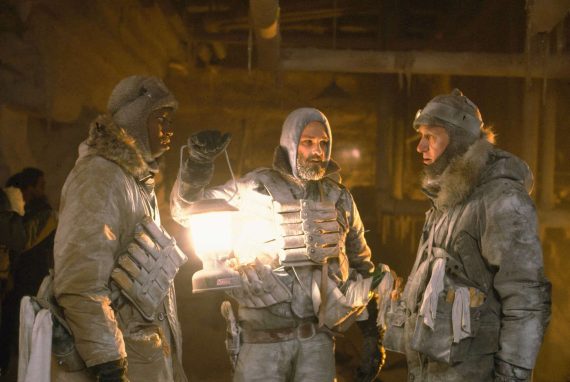 The Thing is out on 23rd October on Blu-Ray in the UK, released by Arrow Video. The new 4K scan transfer is a revelation. I haven’t seen the other Blu-Ray releases to compare, but it’s a huge improvement over the DVD versions I’ve seen and it looked magnificent blown up nice and big on my projector. It’s a clean, natural looking picture that’s incredible detailed and made me realise the film is more colourful than I remembered.

There’s a whole host of special features included too. Here’s the list:

– Audio commentary by John Carpenter and actor Kurt Russell
– Audio commentary by Mike White, Patrick Bromley and El Goro
– Who Goes There? In Search of The Thing – an all-new feature length documentary produced by Ballyhoo Motion Pictures exploring the history of The Thing, from the original novella to John Carpenter’s terrifying science fiction classic. Featuring new interviews with the cast and crew, as well as authors, historians, and critics
– NoThing Left Unsaid: Texas Frightmare Panel – all-new 55 minute Q&A with some of the cast members
– 1982: One Amazing Summer – an all-new retrospective documentary produced by Ballyhoo Motion Pictures about the unforgettable films released in the summer of 1982
– John Carpenter’s The Thing: Terror Takes Shape – archive documentary on the background and production of the film
– Vintage Featurettes
– The Thing 27,000 Hours – with optional commentary
– Fans of The Thing
– Outpost #31
– We’ve Found Something in the Ice
– Outtakes
– Behind-the-Scenes
– Trailers, Teasers, TV and Radio Spots
– Still Galleries
– Poster
– Lobby Cards
– Book containing new writing on the film

It’s an exhaustive set that will keep even the most ardent fan satisfied. A lot is ported over from previous versions, but it’s all worth keeping. The commentary from Carpenter and Russell is an absolute gem in particular and would be sorely missed if it wasn’t included. The Terror Takes Shape documentary is excellent too. Of the new material, Who Goes There is the standout. Although there’s a little crossover with the old doc, it goes into more detail about the history of John W. Campbell Jr’s original story and Howard Hawks’ film adaptation. The Q&A is a lot of fun too, with several cast members present and on top form, telling fun and frank stories about the shoot.