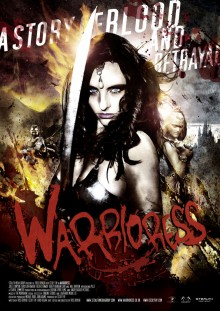 Warrioress is that rare thing, a truly independent, but still commercial, UK film and, although, at times, it shows its budgetary restrictions, for the most part you wouldn’t know it’s a lower budget film.

Warrioress tells the story of a warrior tribe who must select their bravest warrior to take part in a ‘once in a generation, far-away contest that will decide the fate of the lands’. Cue some selection trials including: a tree-climbing bit, (that’s a bit similar to a scene in Ong Bak), some ring of stone trial-by-combat scenes that are nicely done, plus some words of caution and wisdom from the tribal elders and our heroine, Boudiccu, is ready to set off on her mission to do battle with the chosen warrior from the northern tribes.

She initially sets off on her own, but is quickly joined by her boyfriend – who we’ve seen earlier at the trials and also making love to Boudiccu under a tree (in a very nicely realised scene of intimacy) – and her sister, Morwena. Against her better judgement she lets them tag along for the ride… or should that be long walk!

Along the way the group are attacked by evil Falonex warriors who repeatedly try to steal the sister swords from Boudiccu as they don’t want the tribe-uniting contest to go ahead. The fight sequences are uniformly good and get better as the film goes on. Cecily Fay (Dragon Crusaders) really outdoes herself with some complex fight manoeuvres and is very ably assisted by the likes of Joelle Simpson (Shaun of the Dead), against the likes of Helen Steinway Bailey (Prometheus) and Zara Phythian (The Hike). And the women don’t hog all the limelight, as Brendan Carr (Ten Dead Men) has a fun role in the form of a nut-job slave trader and Christian Howard (U.F.O) mixes it up being not only her romantic interest, but also an accomplished warrior in his own right with some cool fight scenes too.

Warrioress is set in a post-apocalyptic world, although that’s not really made clear to begin with, and uses its sometimes stunning locations well. The photography is pretty decent – considering the budget and time constraints – and the acting is above par for this kind of low-rent action film. 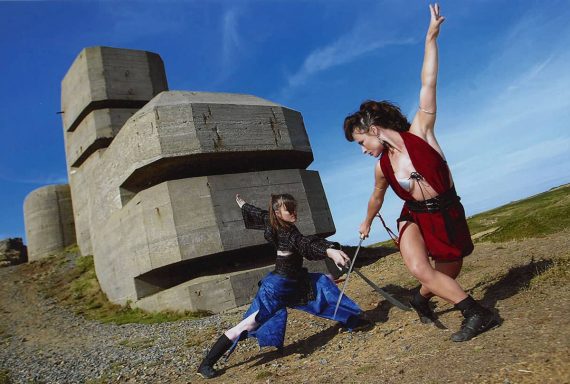 Fans of fantasy films might be surprised by the amount of martial arts action in the film, but that does, at least, make it stand out from the crowd of Dungeons and Dragons wannabes. Being a fan of both types of film I really enjoyed this movie mash-up.

As with most fantasy films the viewer has to increase their tolerance for overly flamboyant names and cheesy dialogue (… putting a smile on my all powerful face…) and just go along for the ride. Tolkien has a lot to answer for! And, as with some of the fantasy flicks from the 1980s, there’s a dream-like quality at times to Warrioress, where the viewer feels as if they’re experiencing a waking dream.

Director Ross Boyask must also be commended for trying something a bit different from his previous urban gangster/fight films, namely Left for Dead (2005) and Ten Dead Men (2008). While it would be nice to see him direct another gritty urban fight film I’d also quite like to see a Warrioress sequel, which this first film nicely sets up.

All in all, for a low budget fantasy film, which crams in lots of crazy fights with an array of weapons and hand-to-hand techniques, (the stick fight is a doozy by the way), a flashback of a village massacre, a severed ear, Nazi memorabilia, a witch, an evil general, a crazy slave trader, some great locations, a naked babe in a waterfall, some rock climbing, lots of daft names, ninja-like troops, a chase on horseback, plus some genuinely funny moments, and I think Warrioress definitely punches above its weight.

I look forward to seeing what Ross Boyask, Cecily Fay and the rest of the Warrioress team produce next…