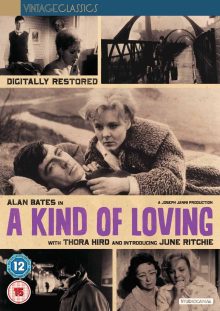 Studiocanal have reached a milestone 100 titles in their excellent Vintage Classics range and they’re celebrating by launching a brand-new website. We’re big fans of the series and have reviewed numerous titles from it. To join in the celebrations, we’re digging through their back catalogue to review a trio of favourites. Our final review is for A Kind of Loving.

Before the British New Wave films of the late 50s and 60s, the working class were largely marginalised in British cinema, occasionally wheeled out as a bit of comic relief or, in the rare cases when they were the leads, represented by lovable but buffoonish figures such as George Formby. The arrival of realistic, slice-of-life films like Saturday Night and Sunday Morning, which provided as close to a realistic depiction of British working class life as cinema goers had yet seen, proved something of a revelation for those looking for a world they recognised on screen, as opposed to a way to escape from it. Despite the fact that they largely avoided melodrama and focused more on the psychological states of their protagonists than on event-packed plots, British New Wave films were a hit with audiences who felt that life as they knew it was finally being taken seriously.

In this early period of New Wave films, John Schlesinger was one of the most important figures, directing two of the best films of the era in A Kind of Loving and Billy Liar. The former was the director’s feature debut but this is certainly not evident in the mature craftsmanship seen in his loving but unromantic depiction of Northern England. Schlesinger was also fortunate to have his first script (as well as his second, for Billy Liar) written by the smartly satirical writing partnership of Keith Waterhouse and Willis Hall. Their witty, subversive approach beautifully compliments Schlesinger’s immediate skill at getting inside his protagonist’s head and teasing out their emotional state without resorting to anything as cheap as voiceover narration. In this respect too, Schlesinger was extremely lucky to have Alan Bates as his leading man. Bates makes the central role of factory draughtsman Vic Brown realistically multi-faceted, the initial impression of a well-mannered, sweet-natured gentleman slowly giving way to a portrait of a tense, confused and selfish young man whose essentially righteous ideals are tainted by a pulsating sexual desire and a growing feeling of claustrophobia as adulthood closes its jaws around him. 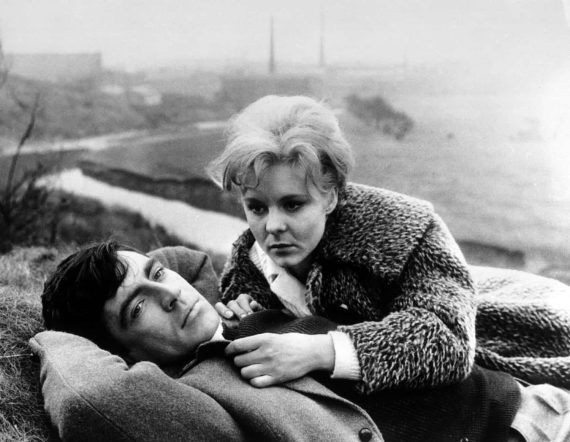 A Kind of Loving opens with a wedding. Schlesinger’s brilliant opening sequence reminds us that this special occasion cannot shut out the everyday mundanity of domestic life as it continues to unfold around the wedding party but the bride and groom, Vic’s sister Christine and her new husband, are the picture of wedded bliss. This joyous occasion serves as a contrast to later events and Bates shows in his response to the happy couple that this is his idea of a good future. He idealises his sister and hopes to meet a girl just like her, but these naïve hopes do not mix with his sexual desires and when he manages to get a date with Ingrid, a typist from the factory where he works, the first flush of attraction soon turns to a dark and petulant desire for more. As Ingrid, June Richie is also excellent, and although the film is told very much from Vic’s point of view she manages to portray Ingrid’s own hopes, fears and desires in a way that tips off the audience even when Vic himself can’t, or can’t be bothered, to see them.

The first half hour of A Kind of Loving is deceptively sweet as we watch Vic and Ingrid come together as a couple. Their meeting over an incident involving bus fare, their subsequent walk home together and successful first date should all bring back personal memories of courtship and small, tender anecdotes for any viewer who has been through these rituals. Trouble rears its head first on the second date when Ingrid turns up with an annoying friend and Vic’s understanding response almost instantaneously degenerates into a tantrum. In this scene, Schlesinger encapsulates much of the emotional complexity of what’s to come. We understand Vic’s disappointment at the presence of the uninvited party but his reaction is too strong, turning his wounded pride into unkindness. This hiccup is overcome quickly enough but the sweetness of those early scenes is never recaptured, as if Ingrid’s and the audience’s first glimpse of Vic’s less affable side can never be erased. 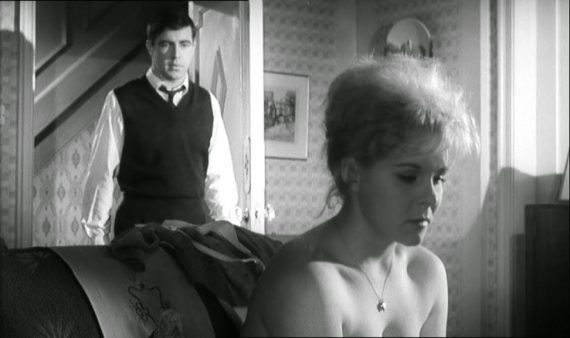 A plot synopsis of A Kind of Loving makes it sound less than eventful but the depth with which the minutiae of courtship, sexual hangups, disappointment and the smothering encroachment of societal expectations are depicted is so outstandingly involving that never for one moment does the film feel less than gripping. The film’s final third is bolstered further still by the shifting focus onto Vic’s relationship with his overbearing mother-in-law, superbly portrayed by Thora Hird. Hird would spend a great deal of her subsequent life portraying less subtly delineated variations on this character in TV sitcoms but here she is perfectly understated as a woman whose rude manner with window cleaners and shop assistants is far less harmful than her less visible passive-aggressive treatment of her new son-in-law. Hird’s performance, as well as Waterhouse and Hall’s delicate script, is careful not to portray the character as a deliberately hateful witch, but rather a woman who thinks she is in the right and acting for the best reasons even when the choices she makes are astoundingly insensitive. This is beautifully highlighted in a brief clash of political ideologies between Hird and Bates, illustrating what essentially different people they are, even as their contrasting beahviour towards Ingrid could be perceived as damaging in equal measures.

Although its three leads are the main focus, A Kind of Loving is peppered with lovely little supporting roles from recognisable faces such as James Bolam, Leonard Rossiter and Bryan Mosely whose appearances help to vividly flesh out the world inhabited by the lead characters. The expectations of those around him, exemplified by these small roles, are what drive many of Vic’s decisions and when he goes against these he encounters hostility, both from the loving family he adores and, in a more abstract sense, from the realities of life itself. A Kind of Loving’s bleakest, most claustrophobic scene follows an event which the film has been building towards and which, for unspecified reasons, has not lived up to expectations. The self-reproach in Vic’s sulky cigarette smoking is second only to the flat denunciations of his mother-in-law in terms of viciousness. 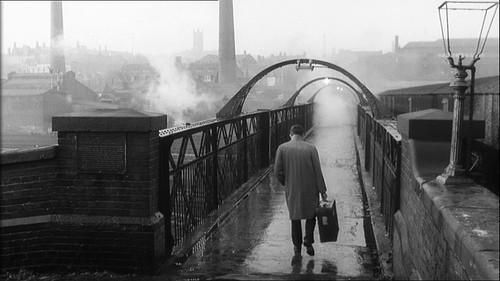 A Kind of Loving, like all the best British New Wave films, gives us a fascinating glimpse of the times in which it is set, but it is also important to have an awareness of the predominate moral climate of the era in order to fully appreciate just how radically subversive A Kind of Loving must have seemed. Its images of nudity in Vic’s dog-eared pornographic publication were unprecedented in mainstream cinema of 1962 but far more unusual is the non-judgemental tone of the brilliant script. Waterhouse and Hall do not mount a didactic attack on premarital sex, neither do they endorse hedonistic promiscuity. They present the various viewpoints of the characters as each having their own plus-points and pitfalls. Sex was no longer a simple matter in 60s films, even if the society they were reproducing wanted it to be so. If A Kind of Loving has a message, it is about the need to set aside our own impulsiveness in order to consider other people from more than just our own narrow viewpoint. Loving is certainly a srong theme in the film, be it sexual or emotional, but perhaps the key word in the title, the word that allows for the possibility of redemption in its tentatively hopeful climax, is Kind.

A Kind of Loving is released by Studiocanal on 1st August 2016 on DVD and, for the first time ever, on Blu-Ray and EST. Special features are as follows:

– A Kind of Loving & the British New Wave – a brief, informative though slightly dry documentary putting the film into historical and cinematic context.

– Interview with Stuart Maconie – the writer and broadcaster Stuart Maconie makes up for the stiffer interviews elsewhere on the DVD with a brilliant, impassioned and gushingly adoring viewpoint on A Kind of Loving and its relationship to other characteristically Northern art, including the music of Joy Division and The Smiths. Maconie is completely engaging, full of relevant knowledge and relentlessly eloquent. Expectations raised by his constant brief appearances as a talking head of bog-standard nostalgia clipshows are completely confounded by this lovely feature.

– Terminus – John Schlesinger’s BAFTA-winning 1962 short film showing a day in the life of Waterloo Station. This generous bonus feature is a real prize for Schlesinger fans, running at just over half an hour and giving us a glimpse of the director’s early style and approach to documentary filmmaking. Like some of the documentary works of Humphrey Jennings, Terminus combines fly-on-the-wall style realism with obviously staged interludes, such as the lost child segment, making it sometimes seem a less convincing depiction of British life than Schlesinger’s fiction films. However, Terminus’s combination of fascinating archive footage and upbeat musical accompaniment make it a pleasure to watch and more than just a noteworthy curiosity for completists.