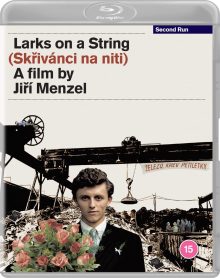 I initially delved into the films of the Czech New Wave relatively recently, in 2015. My first taste was Milos Forman’s The Firemen’s Ball, which I adored, then my love of the movement soon gained further traction when I saw Jirí Menzel’s wonderful Closely Observed Trains only a month or two later. I’ve since been hoovering up any Czech New Wave title that has come my way, primarily those released on Blu-ray by Second Run, and I’ve found much to enjoy in every single one.

Before preparing for this review I’d yet to watch another film by Menzel, but watching Shivendra Singh Dungarpur’s epic documentary CzechMate: In Search of Jirí Menzel (also released by Second Run) made me hungry for more. Needless to say, Second Run came to my rescue once again and are releasing his classic Larks on a String (a.k.a. Skrivánci na niti or Larks on a Thread) on Blu-ray.

Though critically acclaimed and much loved by Czech cineasts now, the film was one that proved problematic for Menzel’s career. Emboldened by the worldwide success of Closely Observed Trains (which snagged him an Oscar for Best Foreign Language Film) and the liberalisation of Czechoslavakia during the Prague Spring, Menzel decided to adapt a collection of short stories by regular collaborator Bohumil Hrabal that directly criticised the early years of the Communist regime in the country during the 1950s. 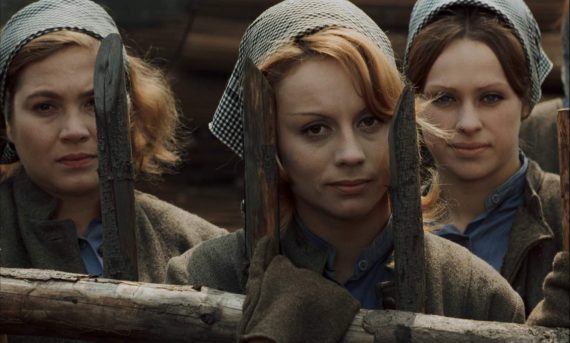 Unfortunately, whilst production began during the relatively liberal Prague Spring era, it was finished after the Warsaw Pact invasion of Czechoslovakia took place. As such, the film was banned before it could even be released. In fact, it didn’t get officially released until 1990, when the Communist regime fell.

It got Menzel in a lot of trouble too. He was offered work overseas due to his Oscar success, but the authorities took his passport away from him. The only way he could initially work again was to make pro-Communist films but, eventually, as the situation changed in the country, he was able to make more notable and personal work.

Thankfully, Larks on a String is more readily available now and Second Run’s polished-up and extras-laden Blu-Ray is improving the situation even further.

The film, as mentioned, is set in Czechoslavakia during the 50s, when Communism had been newly thrust on the people. We follow a group of scrap metal workers, who were mainly posted there as a form of punishment for their supposedly ‘bourgeoise’ pasts. It’s a motley crew, with a philosopher rubbing shoulders with a saxophonist, a lawyer and other men deemed anti-Communist, other than a milkman, who’s voluntarily taken the job. 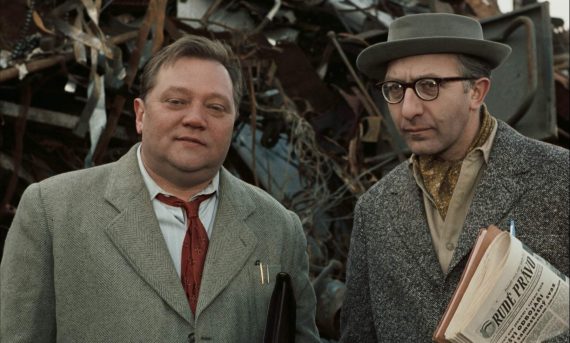 The group make the most of their situation, goofing around and flirting with the neighbouring female convicts who are working in the scrap yard to pay penance for the crime of desertion. However, when one-by-one members of the team disappear, following anti-communist activity, their laid-back lifestyle proves more dangerous than it seems.

Like in Closely Observed Trains, the action here is fairly episodic, as you’d expect from a film based on a selection of short stories. Menzel and Hrabal tie it all together by focusing on a single group of characters working in the scrap yard and adding a central love story between one of the workers and a female prisoner as well as following the unusual relationship between a guard and his new gypsy wife.

There’s not a great drive to the story though, due to its piecemeal nature. It has the feel of a ‘hanging out’ movie in this sense, where the pace is quite leisurely but your interest is held through the interactions between and antics of the characters. The lazy feel, as well as the vast scrap yard setting, seem to represent the fact that Communism was fixing the country in the past with no hope of advancing. 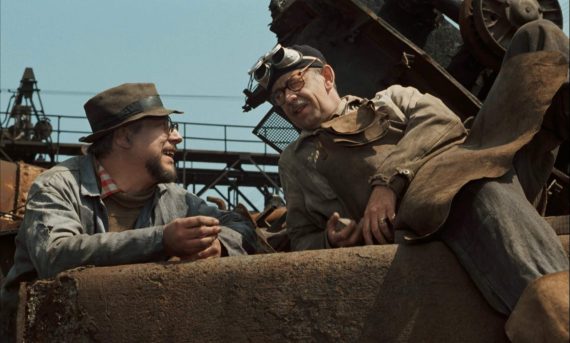 I must admit, the conversations that make up much of the film and are often heavily political or philosophical occasionally went over my head (I’m not well versed in such matters – I’m just a dumb movie lover). As such, it took me a little time to warm to the film, but warm to it I did. After a short while, I got the point too, so the discussions between characters took on more meaning for my slow-moving brain.

The anti-communist message is blatantly clear in fact, with Menzel and Hrabal skewering the harsh form of the system that Czechoslovakia was thrown into in the 50s. Simple freedoms and pleasures were lost or at least forbidden, mistrust and fear developed and life seemed to lose colour and variety. Thankfully, for the audience, this is not portrayed through bleak melodrama but through often absurd comedy.

The humour is sharply political, for the most part, but Menzel and Hrabal also throw in some bawdier moments and even a little slapstick . In this sense, even if, like me, you may find the political statements going over your head, there’s still enough to enjoy to keep you interested. 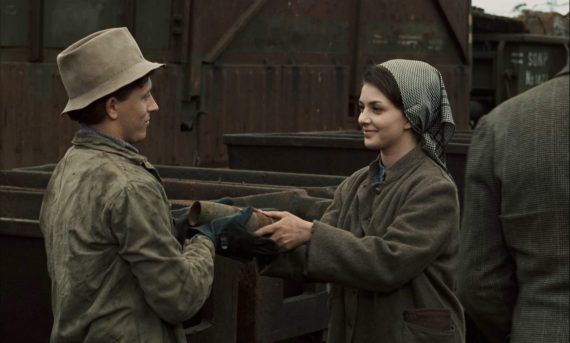 Larks on a String has quite a light tone too, on the surface at least. There’s a dark message at its heart, and the disappearance of several characters is alarming, even if it’s only subtly alluded to. However, on the whole, the characters treat their situation as, well, a lark. They have a warm camaraderie and make the best of what little they have. There aren’t really any true villains either. The guard that watches over the workers and prisoners frequently turns a blind eye to them bending the rules and even pushes the boundaries a bit himself. The workers’ Trustee (played by the great Rudolf Hrusínský) is a little mean and a stick in the mud, but he’s rarely taken very seriously. The only real ‘bad guy’ is early communism itself.

If you wanted to pick fault with the film, you could say that the women aren’t very well written, being used mainly for the men to pursue or ogle at. However, I found their presence grounding and the female characters greatly add to the film’s human side and charm.

On the whole, it’s an unusual but wholly captivating experience. Its episodic, leisurely-paced nature won’t be for everyone and I didn’t fall for it quite as strongly as I did Closely Observed Trains, but I did warm to its strange blend of sweet charm and bitter social criticism. Some of its political intentions may have passed me by but I enjoyed it nonetheless. 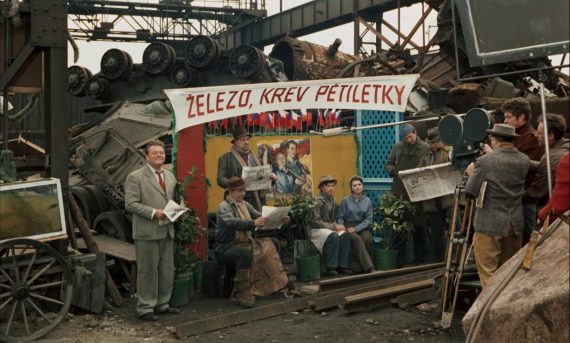 Larks on a String is out on 18th July on Blu-ray, released by Second Run (an older DVD is already available on the same label). The picture is stunning, with wonderfully natural colours and textures. One scene is softer than the rest with a little colour fluctuation, but it’s a scene that was originally cut out by the censors, so we should be glad to see it in the film at all. The sound is great too, coming through with depth and clarity.

The Projection Booth commentary is excellent, as usual, offering plenty of contextual analysis of the film.

‘7 Questions’ is a short but sweet piece that allows Menzel to tell his story concisely, as well as make clear the aims of Larks on a String.

Menzel’s interview with Shivendra Singh Dungarpur, assumedly taken from the Czechmate recordings, once again allows the director to dig into Larks, its background, production and release. There’s some repetition between this and ‘7 Questions’ but enough differences to make them both worthwhile.

Our Dear Mister Foerster Died already cropped up on the Czechmate disc, but I didn’t mind as it’s a beautiful little film that quietly celebrates art and music and their place in everyday life.

As with all Second Run releases, you also get a substantial booklet, with further analysis of the film. This time Peter Hames provides the bulk of the material, giving background on the film and Menzel’s career, as well as his collaborations with Hrabal.

So, Second Run have delivered an excellent package for this Czech classic that managed to survive its Communist subjugation and come out smiling.