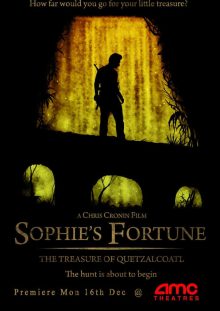 Brendan (Simon Hardwick) turns up at a summer party with his niece Sophie (Elsa Busow) only to find it nearly over and all the cakes and sweets already scoffed. Fortunately the annual ‘fathers only’ treasure hunt is soon to start, giving Brendan the chance to compete for the ‘Treasure of Quetzalcoatl’ on Sophie’s behalf so that at least she’ll hopefully have something to go home with. As he and the other dads set off through the woods, leaving behind rather bemused wives and kids, Brendan begins to wonder what he’s let himself in for, particularly when various masked and heavily armed men start shooting at him!

Five minutes in and we’re in quasi Indiana Jones territory as our would-be heroes journey through jungles and across dangerous terrain in the hunt for this mysterious treasure, all the while having to avoid traps and battle various armed goons who do seem to genuinely want to kill them all and keep the treasure for themselves.

Sophie’s Fortune is a lot of fun with the kind of surreal plotting normally reserved for a Terry Gilliam film. Once the action begins (and there’s a lot of action) the film hardly pauses for breath as the dads find themselves flinging themselves around like characters from a John Woo or Ringo Lam movie. Playing out like some sort of homage to those kind of eighties action flicks that crammed punters into cinemas up and down the UK at that time Sophie’s Fortune never takes itself too seriously and ends up making the viewer feel delirious as we try and keep up with the overly competitive dads. Oh, and there’s an amusing coda at the end of the credits. 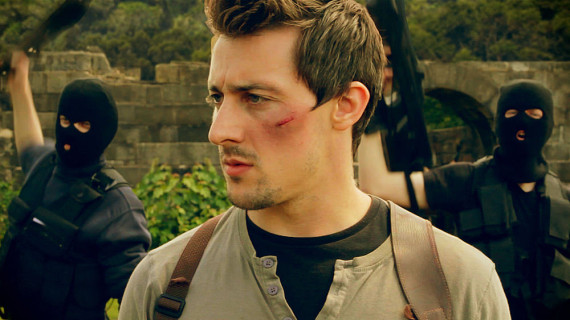 Not only is the action fun, but there are lots of intentionally funny moments sprinkled throughout, mostly at the expense of the men who are running around like crazy things, sometimes looked upon by their kids shaking their heads in embarrassed disbelief.

If one wanted to be picky I could criticize the sometimes pretty bad CGI effects (some of the supposedly still backgrounds move around when they’re clearly not meant to), and some of the acting is pretty wooden, but, for the most part, this short, independently made film is great fun and I want to see what the filmmakers do next. I’m guessing this is meant to be a ‘calling card’ of sorts and, if so, I hope someone out there is taking notes and will help these guys make a feature sometime soon.

For more information about Sophie’s Fortune check out the website at: www.sophiesfortune.com