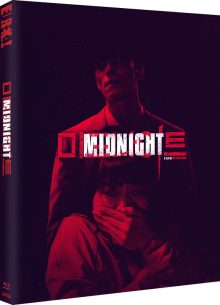 Right now, it feels like films and TV shows from South Korea have never been more popular. Bong Joon Ho’s Parasite made history by becoming the first ever foreign language film to win a best picture Oscar, while Netflix’s Squid Game became a cultural phenomenon, racking up more than 2.1 billion viewing hours to become the streaming service’s most successful show ever. With its cultural capital currently riding so high, it seems that there is certainly a weight of expectation that comes with each new South Korean release.

Midnight, a new serial killer thriller from debut director Kwon Oh-seung, seems to be no exception. In fact, expectations would have already riding high even without the South Korean connection. Winner of the best feature film at Grimmfest in 2021, as well as picking up a slew of other awards from the festival circuit, Midnight arrives on Blu Ray with a fair bit of prestige already attached. 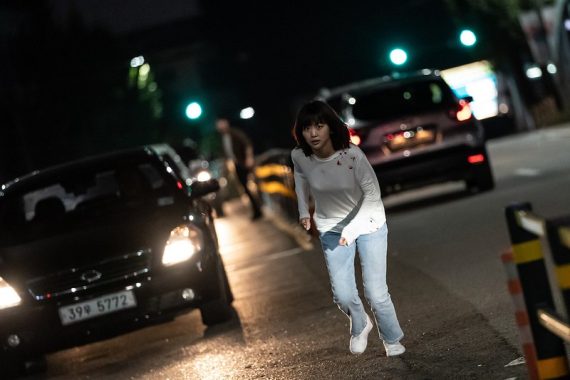 Midnight may be fictional tale, but it is clear in the opening minutes that Oh-seung (who not only directed, but wrote and produced into the bargain) has looked to real life serial killers for inspiration. With his good looks, charm and sinister tactic of luring victims into his van, Do-Sik, Midnight’s psychopathic killer, has more than a hint of Ted Bundy about him. Yet don’t be fooled into thinking that Midnight is going to adhere to the conventions of a typical ‘serial killer’ film, where victims are picked off one by one, with a weary police detective in dogged pursuit. Instead, while Oh-seung has still crafted a meticulous thriller, he has made enough unique choices to ensure that his hide and seek rollercoaster feels refreshingly different.

After a short, efficient opening that powerfully suggests more than it actually shows, we are  slowly introduced to hearing impaired Kyung-mi (Ki-joo Jin) and her mother (Hae-yeon Kil). Walking the back streets of an unnamed South Korean city late at night, Kyung-mi catches the attention of Do-Sik. Believing that her deafness will make her an easy catch, Do-Sik sets off in pursuit, sparking forth a vicious and twisted game of cat and mouse…. 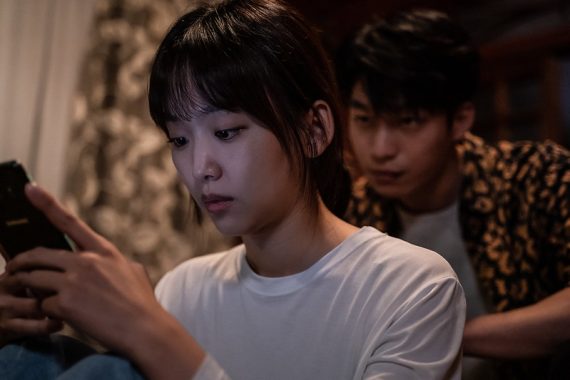 This isn’t the first time that we have seen a character with a disability take centre stage in a horror film. The 40s gothic classic The Spiral Staircase featured a mute central character while Audrey Hepburn starred as a visually impaired woman in the 1967 chiller Wait Until Dark. Like those films, Oh-Seung ensures that the main character’s disability is used for maximum dramatic effect. Frequently throughout the film, Kyung-mi’s difficulty in communicating with the police and members of the public ensures that her plight usually gets worse instead of better, with the killer himself cruelly yet adroitly manipulating Kyung-mi’s disability in order to manoeuvre himself out of tight-spots. At one point, Oh-Seung even goes full Hitchcock, utilising Kyung-mi’s variety of hearing aids and tools, along with the killer’s unknown location, for maximum dramatic effect. 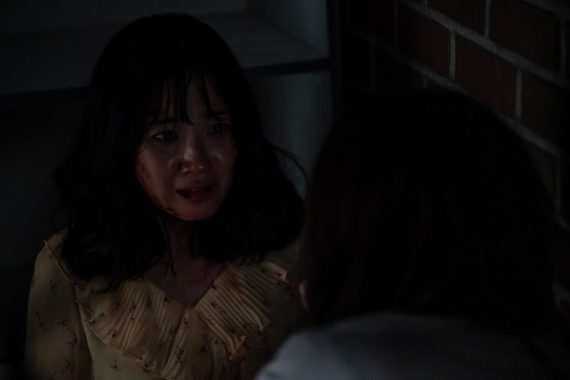 You never get the sense that the film is exploiting a disability for its own personal gain however. Hearing impairment in Midnight is treated with sensitivity and respect, where general members of the public are frequently depicted as ignorant; indeed, the film has quite a lot to say in showing how many people’s instant reaction to persons with disabilities is to patronisingly treat them like children. Later scenes also have a layer of depth to them. Witnessing Kyung-mi desperately trying to get help from members of the public and the eventual lengths she has to go to, you cannot help but feel that Midnight is hinting at the powerlessness woman can still encounter in society, especially in the cold anonymity of a bustling metropolis. 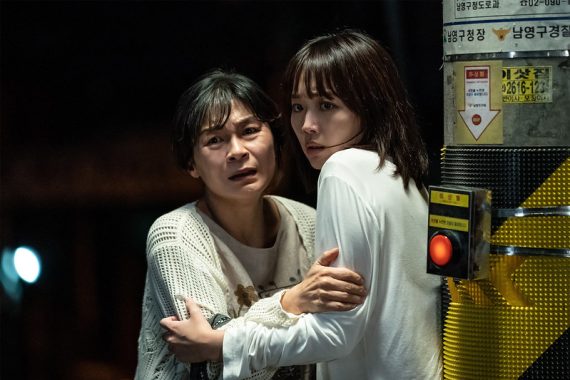 These are just some of the ways in which Midnight feels unique. While you certainly can pick apart and analyse these added layers and subtexts if you choose to, Midnight’s main concern is being an edge-of-your-seat thriller first and foremost and in this regard, it succeeds the vast majority of the time. Taking place in real time over a single night, once Do-Sik has set his sights on his chosen victim, the pace never really lets up, with Oh-Seung consistently torturing his audience with agonisingly tense set pieces. There is great variety here, from chases down dark city streets, to fights in brightly lit foyers, to games of cat and mouse in private homes. At many points, Midnight actually feels more like a slasher film than anything else, with the initial chase that usually ends gruesomely within five minutes is here extended out over an entire film’s running time. 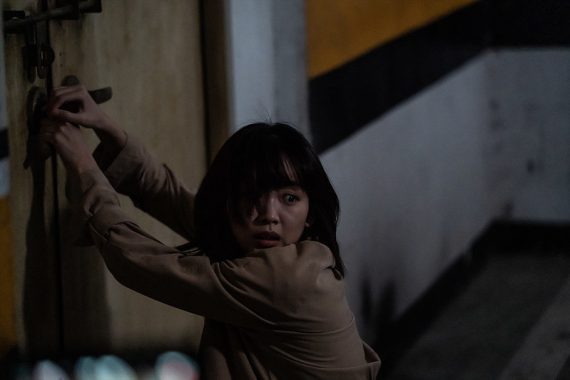 Sometimes this tension doesn’t feel as natural as you might like, with certain characters and situations resolving themselves in a rather clunky manner to allow the killer an ‘out’, thus ensuring that the chase can continue. The tension at these points, which feels more cynically constructed that organic, sometimes lets Midnight down, while the final fifteen minutes certainly feels like Oh-Seung has played the same trick one too many times. These small missteps only rock the boat, however. For a debut film, Midnight is damn impressive, with Oh-Seung’s technical polish and frequently palm sweating grip on his audience ensuring that his triumphs far outweigh the tiny stumbles. 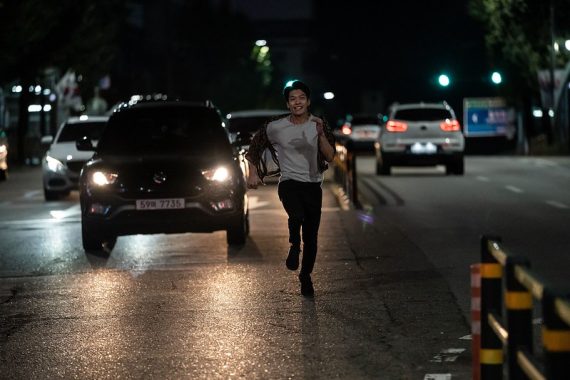 His helped mightily along the way by Wi Ha-Jun’s performance as the degraded Do-Sik. Achieving a complete volte-face from the mild mannered, heroic cop in Squid Game, Ha-Jun has a whale of a time in the role, whether he’s chasing his victim down darkened alleys or chillingly changing his clothes and appearance in order to dupe his target. Despite his slender frame, Ha-Jun bristles with a cruel, vicious energy that electrifies the screen whenever he appears. He is ably supported by Ki-joo Jin and Hae-yeon Kil who, as the victimised mother and daughter, bring smarts and empathy to two challenging roles, as well as a charismatic and physically robust turn by Park Hoon, who plays a traumatised brother looking for his missing sister. 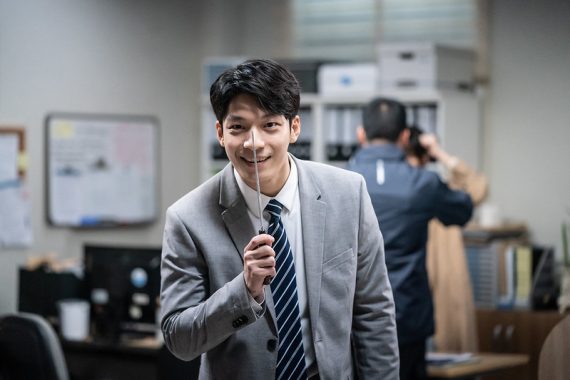 By slickly combining the horror genres of the serial killer film and the slasher, Kwon Oh-seung has produced a winner with Midnight. With enough unique and unusual layers to elevate it beyond standard genre fare, it nevertheless finds it greatest success in being a tense, thrilling and (for the most part) grippingly unpredictable ride. This is deliciously entertaining, edge-of-your-seat stuff, proving that South Korea’s reputation for producing some of the best film makers in the world isn’t going away any time soon.

Midnight will be released on the 14th March by Eureka on their Montage Pictures Label. Being such a recent film, the picture quality is unsurprisingly fantastic. With so much of the film taking place at night, however, a decent encode is crucial. Thankfully, Midnight exhibits no signs of crushing or macro blocking, with the encode handling dark, difficult scenes with success. Subtitles are clear and easy to read as well, with good distinction made by dialogue that is spoken and that which is signed.

The disc comes with a few extras, which are listed below:

Kat Ellinger provides a typically exhaustive and informative commentary track, discussing everything from genre cinema in South Korea to Midnight’s technical construction, focusing particularly on the film’s use of sound. A huge fan of the film, Ellinger also offers her own take on the film’s various subtexts. This is a great companion piece to Midnight and is absolutely worth a listen.

The second extra is a video essay on Korean Horror Cinema by the critic Travis Crawford. While quite a few people’s knowledge (myself included) of Korean horror only extends to the last twenty years or so, here Crawford provides a fascinating look back at the Korean horror films of the mid to late 20th Century, focusing especially on films from the 60s and 70s. Discussing the common links, traits and themes that define the films (as well as spending a long time discussing the Housemaid film and its numerous remakes) this is a really informative and interesting look back through Korean horror cinema – as Travis Crawford concludes, we can only hope that some of the films he mentions get a western release!

Midnight also comes with a booklet (which I didn’t get a chance to read for this review) along with a slipcase. Both of these are limited to 2000 copies only with the film’s first print run, so if you like Midnight, it would be wise to snap up a copy sooner rather than later.