Welcome to our latest trailer story – where we figure out the (usually obvious) plot of a film based on the trailer. This time, Ed Westwick’s latest rom-com adventue, Chalet Girl. (editor note – this film came out in March 2011 but it seems Lyndsey is THAT stupid)

Kim Matthews used to be a champion skateboarder, but now she’s stuck in a dead end job trying to support her Dad. Opportunity comes knocking in the form of a catering job in the one of the most exclusive chalets in the Alps.

Just in time for the winter (ssh, I know it’s unseasonably warm outside but I’m setting the scene), The UK Film Council (and a million other co-producers) give us a rom-com with a twist – it’s set in the alps and they somehow got the pretty boy from Gossip Girl to star – revolutionary right?! Before we even take a look I’m going to put my neck on the line and suggest that our ‘pretty tomboy’ Kim (Felicity Jones) and our hunky male lead, Johhny (Westwick), end up making out in front of a roaring fire in a chalet, he realises his curent girlfriend is a bitch and our two leads hook up, dragging Kim and her Dickenion Pa out of poverty. Actually – I think I’ve just hit on the best plan to save the UK economy – does anyone have George Osborne’s phone number??

Lets have a looksie…

00:08 Bet you can’t guess which one is our ‘pretty tomboy’? (Aside – seriously, that’s how you’re selling her on your official blurb? Shame on you…) 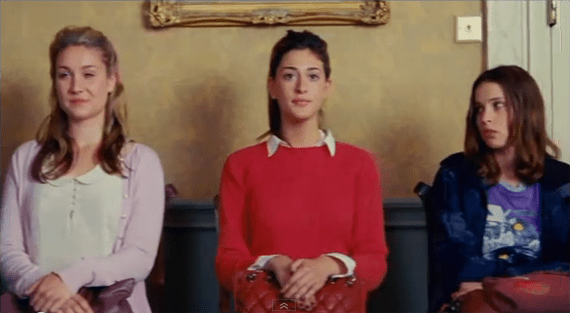 I think this chalet is for posh people – what do you reckon?

Ok. so leaving aside the fact they probably wouldn’t have offered her the job because she’s *shudder* poor, (she tells us later she can’t even ski – HILARIOUS RIGHT! OMG!!!), let’s carry on. Kim neatly introduces us to the scenario – new job, blah, blah, chalet girl, ups and downs, HILARIOUS shots of people being hit by skiers, blah blah.

00:24 ‘A chalet girl who can’t ski – that’s classic’. Yep – right up there with Fork Handles and the Dead Parrot sketch for me…

And in case you didn’t believe her: 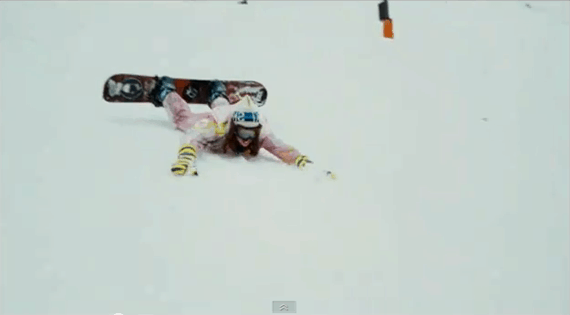 You see, the trailer is very cleverly juxtaposing the voiceover with the visual for comic effect – so what she’s saying is opposite to what we can see is happening… I know right, OMG!!! This film is going to be mega smart. For example;

00:34 ‘I’ve made a good impression on the boss’ – but we can see how aghast the posh people really are: 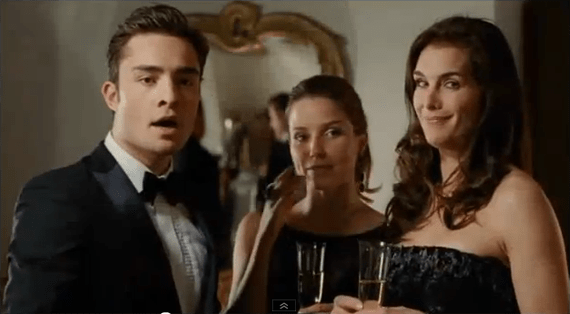 Notice handsome male lead’s concerned face compared to the wicked, judging faces of the bitchy girls. Ladies… why can’t we just get on? Just because she’s one of the *shudder* poor people doesn’t mean she doesn’t deserve to be loved.

But it’s not all disaster – she’s making friends (and getting naked in hot tubs) and she’s spotted our hunky Ed checking out her lady lumps – like, OMG!!! AMAZING! (erm… this trailer has turned me into an american teenager even though it’s a british film. Having said that, the whole thing smacks of that American Sorority House, squealing, girly, bullcrap that I half expect to see a Hilton in a cameo role). 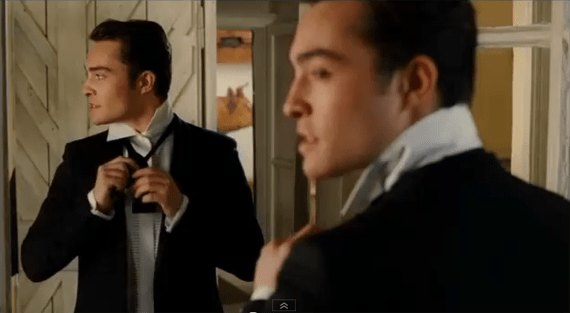 For some reason, Handsome Boss is now in her Chalet getting dressed (actually, I only posted this picture because Westwick is kinda hot… it’s ok, you can admit it…)

So they’re buddies – that will only end well right. Naturally, buddies in the alps go skiing together – but she can’t ski… what is she to do? Silly audience, are you forgetting we told you she’s a champion skateboarder – she can apply said skateboarding knowledge to a snowboard and voila – expert in no time at all. Now they’re chatting and look, they’re still buddies. However, other chalet girl helpfully points out – ‘No sleeping with the clients… unless they’re FIT’. Nice. Way to teach self respect… Also helpful if you failed to pick up on the charged sexual atmosphere brewing between our two leads. 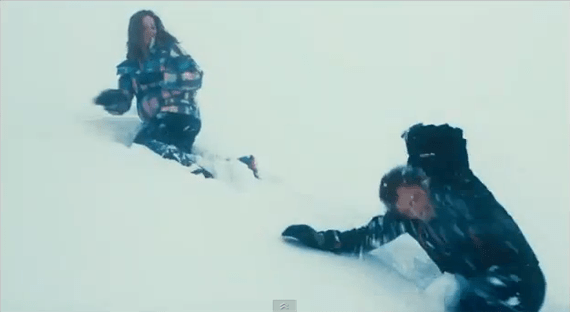 Nice try guys – But Dumb and Dumber got there first. Now THAT’s a classic.

Cue slushy music… Other Chalet Girl helpfully points out to us: ‘Season ends, he goes back to his world, you go back to yours’. Oh. Shattered that dream then. Sad face.

Cue Brook Sheilds (who I think is Handsome Male’s mother?!) ‘She’s a chalet girl – I just think you can do better’. Harsh. Posh people are mean. 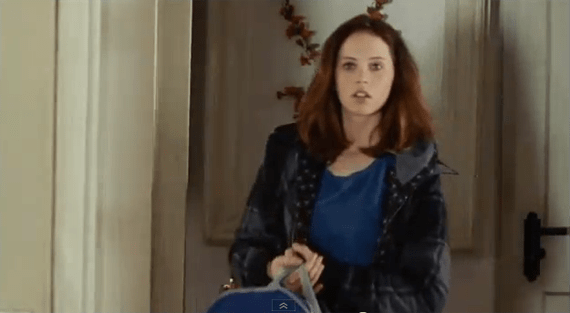 But don’t worry – voiceover man is kinda upbeat so this one will end well. Remember that snowboarding skill she discovered? Well, I learned (thanks to the synopsis) that there’s a competition with a big prize… and our Kim is a natural (see 01:33 for confirmation) which might just be what her and her *shudder* poor pa need to finally be happy. Because only rich people can be happy right? (aside – I think Bill Bailey is her dad – I can’t figure out what other part he could be playing [other than himself – they even called him Bill – I love BB but seriously, he has the range of Russell Brand] and Nighy is obviously posh dad because we see him a posh clothes which is proof!)

Cue lots of shots of her doing awesome snowboarding stuff – some witty editing of Bailey and Nighty and we’re done… phew!

Well, apart from making me stupider (seriously, I actually think watching this trailer a few times destroyed some cells – like, OMG!! WTF! WLTM man with GSOH – whoops, wrong site…) this trailer not only gives everything away but it’s also a totally predictable premise – cute tomboy gets turned into a woman and rescued by rich boy desperate to connect with the ‘real’ world. It’s schmaltzy and irritating and I would be utterly amazed if it’s either funny or remarkable in any way. My hard money is on her winning the title (or her losing it by a tiny margin and being given a big sponsorship deal – either way, she ends up not poor at the end) and her and Westwick hooking up – maybe with him defying his controlling mother along the way.

YAWN – someone go and see this and let me know if it’s as bad and as predictable as it looks – it’s out in the UK… oh. It seems it came out in March 2011. Damn it and damn you itunes trailers for confusing me!

Ok – well seeing as I’ve gone to all this trouble lets have a go at predicting it anyway as it’s out on Blu ray and DVD on Oct 3rd. Next time, I’ll do a new film. Promise!