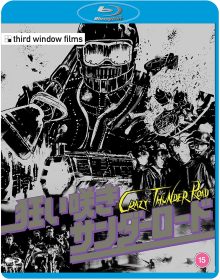 I already provided a potted overview of the early career of Sogo Ishii (who later renamed himself Gakuryû Ishii) in my review of Burst City but, in short, he broke through into the mainstream with his Jishu Eiga (self-made/amateur) film Crazy Thunder Road. This was actually his graduation film made whilst studying at Nihon University, but Ishii was lucky enough for it to be picked up by Toei for distribution. Crazy Thunder Road was a big success too, making a lot of money in Japan, considering how little it cost to make.

Despite, in Japan, being popular, hugely influential in its punk stylings and highly regarded (Takeshi Kitano reportedly had it as one of his top ten favourite films of all time, when asked to submit his list to the illustrious once-per-decade Sight and Sound poll), Crazy Thunder Road has never ventured outside its home country. The wild, unhinged attitude of the film and its low-fi DIY stylings likely wouldn’t have gone down well with the festival scene at the time, which knew Japanese cinema largely for the classically styled work of Akira Kurosawa, Yasujirô Ozu and Kenji Mizoguchi. However, a more practical issue was the prime suspect in keeping the film from reaching Western shores. The rock and punk filled soundtrack was full of songs that hadn’t been licensed for international use. 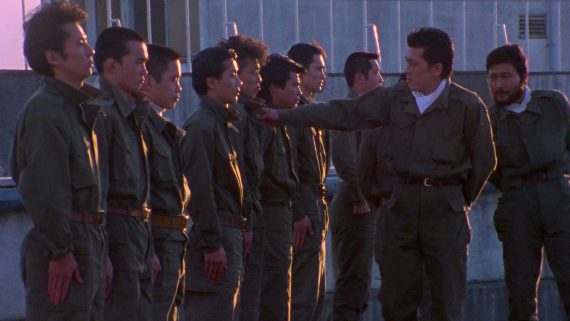 It’s a frustrating reason to keep such an important film from the grasp of fans of Japanese cinema for so long. Thankfully, steps have finally been made to clear all those pesky rights issues and Third Window Films are unleashing Crazy Thunder Road on Blu-ray in the first legal physical release, in any format, of the film. Needless to say, I jumped at the chance of reviewing it and my thoughts follow.

Crazy Thunder Road opens with the Maborosi biker gang discussing whether they should go straight like the rest of the local gangs, forming a peaceful union between them. Many of the members of the Maborosi gang agree and their former leader Ken (Koji Nanjō) leaves the group to be with his girlfriend (Masamitsu Daichi). Jin (Tatsuo Yamada), however, wants to keep tearing up the town, so stages some attacks on the gangs with a handful of loyal friends, creating a new Maborosi Kamakazi gang.

After the consortium of gangs stand up to them though, and Jin and his loyal followers are drafted as soldiers by the far-right-wing nationalist Takeshi (Nenji Kobayashi), the Maborosi gang looks doomed to dissolution. Jin can’t put up with this for long though and breaks out, hell-bent on fighting back against the conformity surrounding him. 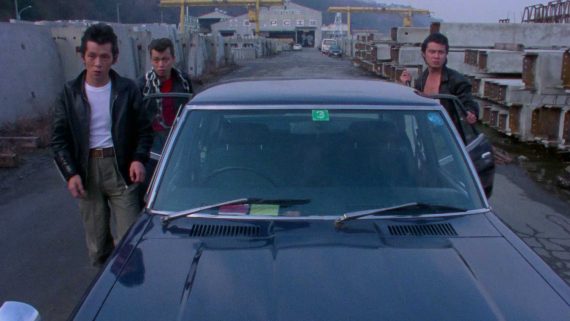 Crazy Thunder Road will be a real shock-to-the-system to viewers unfamiliar with Ishii’s early work. Being originally made as a student film and very much part of the Jishu Eiga scene, it has a DIY aesthetic that stands it far apart from the glossy fare we’re used to these days, even in the indie scene. The production design is makeshift, actors often non-professional (at the time) and the largely post-synced audio is pretty ropey.

However, this all fits perfectly with the punk aesthetic of the film. The central narrative is about a character unable to conform to society’s clean-cut rules and regulations, so having the film around him rough around the edges, with few attempts to maintain the usual sheen and careful composition of classical Japanese cinema, is a perfect fit. 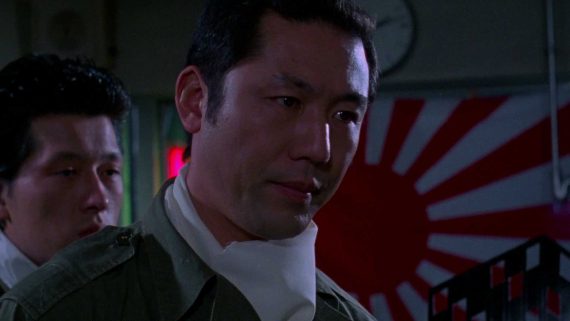 Ishii talks of how there was a kind of mass apathy in his generation. After being involved with student rebellion in their youth, his peers subsequently gave up on anything like that in adulthood, growing cold. The film speaks to that generation with its anti-hero trying to break free from the apathy and burn brightly again whilst the world is against him.

Like Jin, the film frequently breaks the rules too. There are some wildly inventive shots and unusual stylistic decisions made. One scene has the camera spin round and round at a rapidly accelerating pace, until the image becomes nothing but a blur. Scenes in a bar frame an orange neon strip brazenly across the top of several shots. A biking scene has a bike-mounted camera judder violently. Throughout the film there are moments like these that surprise and excite. His handheld camera style and fast cutting brings to mind the work of Kinji Fukasaku too, who made equally as thrilling set-pieces.

Ishii openly says he set out to make a film that was about pure energy over anything else. In an interview on this disc, he describes how he admired the fact punks like the Sex Pistols weren’t talented but put passion into their work, regardless. This passion was infectious and he wanted to make films like that, which were rough and homemade but had visible passion behind them. 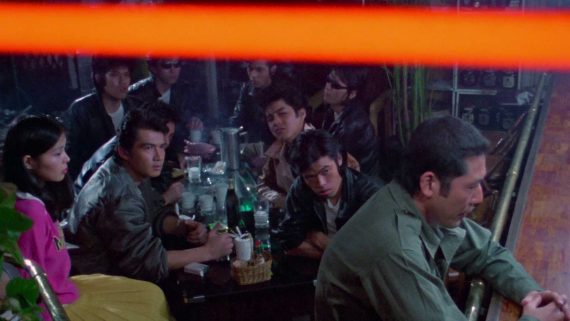 As such, the film is driven by energy rather than narrative. Whilst this works, to an extent, I did find the film a bit of a chore at times. The first half, in particular, is hard to follow as you’re thrown into a discussion between a huge number of initially nameless bikers, with little exposition or backstory. These discussions get a bit repetitive too, as there are a couple of similar sequences within the first 30 minutes. The reportedly often improvised dialogue doesn’t help, with the largely untrained cast not always sure what to say.

When the focus shifts more clearly to Jin, the film becomes easier to follow, though the narrative is still rather flimsy, and it all builds to an explosive, suitably nihilistic finale.

So, like Burst City, Crazy Thunder Road is a film that’s messy in places and narratively could be stronger but gets by on its vibrant energy and style. As a low budget student film, it’s certainly impressive. Bold and exhilarating, it’s a wild ride, even if there are some bumps in the road. 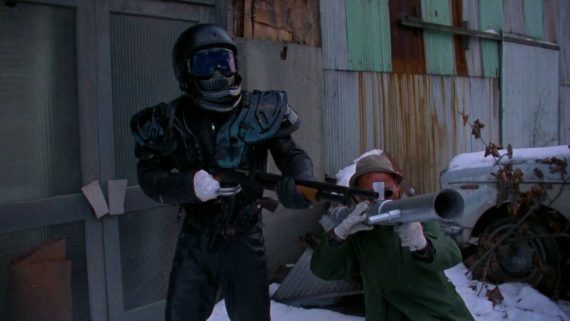 Crazy Thunder Road is out on 21st February on region B Blu-ray in the UK, released by Third Window Films. With the DIY, rough nature of the material, it’s never going to be a demo disc for your Blu-ray player but Third Window do an excellent job of the digital translation, providing a natural-looking picture with strong colours and punchy audio. I’ve used screengrabs throughout this review to give you an idea of how it looks.

There are several special features included too:

Tom Mes’ commentary is characteristically excellent. He was involved in getting the film released in the West, so is openly passionate about it and has a great amount of knowledge about Ishii and the film.

Jasper Sharp’s Jishu Eiga piece provides a fascinating overview of the movement, discussing Crazy Thunder Road but also spreading out to talk about other notable films and filmmakers. The 26-minute featurette made me desperate to track some of the titles down. An idea for a boxset perhaps?

Ishii’s interview runs for 38 minutes and covers his youth and influences, before getting into Crazy Thunder Road and the rest of his career. He ends on some heartfelt thoughts about films in general and advice to young aspiring filmmakers. It’s a wonderful interview that helps you appreciate where Ishi is coming from in his work.

So, a fine package for a long-sought-after film. Ishii, punk and Jishu Eiga fans shouldn’t hesitate to pick it up.