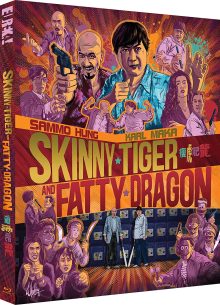 Eureka continue their journey through the back catalogue of the great Sammo Hung with his 1990 buddy-cop action-comedy, Skinny Tiger and Fatty Dragon. It’s a title I’ve seen once before but couldn’t remember much about. Being a big Sammo fan, I couldn’t resist giving it another look though in a beautifully restored presentation.

Directed by the great Lau Kar-wing (brother of the also legendary Lau Kar-leung), the film sees Sammo play Fatty (people don’t mince their words in Hong Kong), a detective working alongside Skinny (Karl Maka). They’re keen to catch “Prince” Tak (Lung Ming-yan), the boss of a Triad ring, and will use any means necessary to do so.

Along the way, they cross paths with Tak’s girlfriend, Lai (Carrie Ng) and try to follow her to get to him. After various ups and downs in the investigation, Skinny and Fatty learn that the real head of the local Triads is actually a man named Wing (Lau Kar-wing himself). 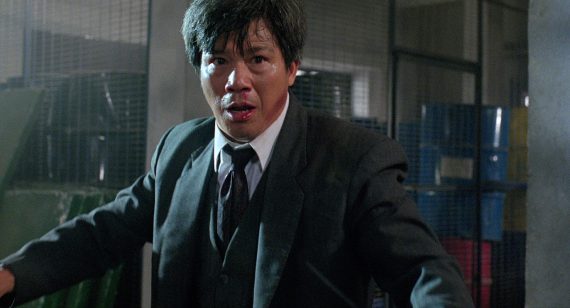 When the detectives’ shenanigans ruin the wedding of the Deputy Commissioner though, they’re put on sabbatical. Taking their time off in Singapore, Skinny and Fatty meet some nice girls and decide to open a karaoke bar over there. However, when Wing sends assassins to kill them and end up endangering the lives of their loved ones back home, the pair vow to get revenge and finally put an end to Wing’s reign of terror.

The booklet included in this set opens by mentioning how the film seems oddly placed in Sammo’s filmography, made in between much grander scale and more innovative productions. Yes, this contemporary set action comedy feels like standard fare that’s cashing in on the success of Maka’s Aces Go Places series, as well as western buddy cop films like Lethal Weapon. It’s also less ambitious than Sammo’s epic Millionaires’ Express or Eastern Condors due, largely, to the fact Skinny Tiger was made by Cinema City, who had less money than Golden Harvest, whom Sammo had fallen out with at this point in his career.

However, Skinny Tiger and Fatty Dragon hits its genre staples with perfect precision, delivering a hugely entertaining experience that, in my opinion, still holds its own against Sammo’s more popular films. 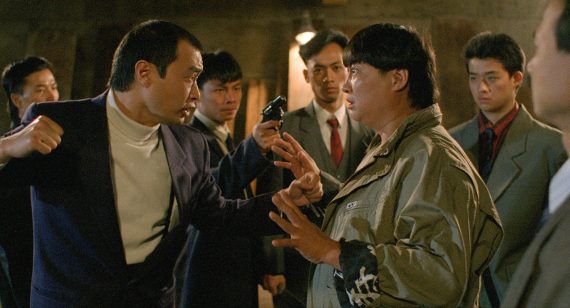 It’s the pacing and spread of action that impressed me most on this rewatch. There’s a steady flow of fight scenes throughout the film and any downtime is alleviated by comedy. A lot of the humour hasn’t aged well (and I’ll explain why later) but it’s still very funny in places, largely through the strong chemistry between the leads. I’ve always enjoyed Sammo’s performances and he’s rightfully considered one of Hong Kong’s favourite stars of the era, but Maka more than holds his own and is a lot of fun to watch, despite his character being pretty mean and sleazy for the most part.

The Singapore sequences cause the film’s only lull, playing out like a tourist promo with a bizarre song and dance routine in the middle, but it doesn’t linger there long. I appreciate a short breather in action films too, allowing for a break before things kick off in the final act. If a film has nothing but fights, you soon grow bored. 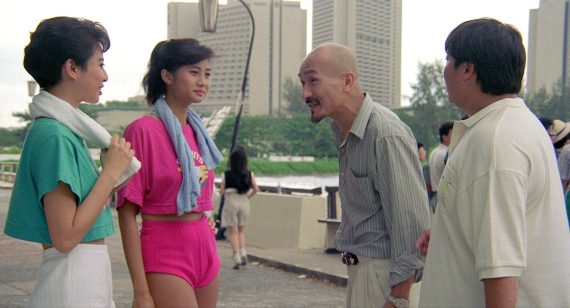 As mentioned, some aspects have aged badly. In particular, the film’s attitudes towards women leave little to be desired. There are numerous gags surrounding voyeurism and sexual harassment that would cause a Twitter meltdown if they cropped up in a modern movie. It was made in a very different time and place though, so you have to give the film some slack in this regard. It’s not really any worse than a lot of the teen sex comedies of the 80s, such as the Porkies series.

There’s a lot of brutal hitting of women here too, even by our heroes, which I found more shocking than the cheap ‘men-in-the-ladies-showers’ gags and such. Sammo is known to believe this is his idea of ‘equal rights’ (i.e. if his characters can hit men, they can hit women too) but I’m not sure everyone else would agree with that.

The central pair’s behaviour (violence towards women aside) at least fits their characters. Skinny and Fatty are never deemed to be respectable police officers. They’re always using dodgy methods to swing things in their favour and little is taken seriously. They even try to sneak away with some of the bad guys’ cash at the end. 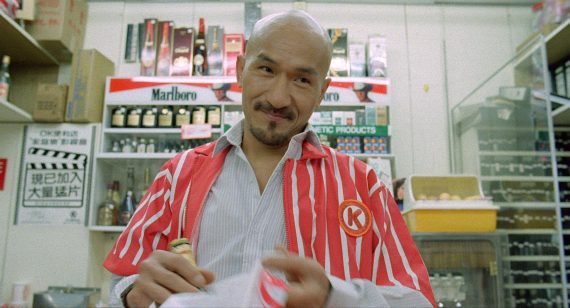 Most fans of Hong Kong cinema of the era will be used to dated aspect like this though and will be watching for one reason – the fight scenes. These do not disappoint. Xin Xin Xiong, Ridley Tsui and Lau Kar-wing provide the choreography and it’s pretty high impact with plenty of bone-crunching, glass-smashing moves. Sammo gets to show his impressive physicality and a great job is made of making Maka look convincingly effective in the fight scenes, despite not being martial arts trained like many of the other performers. The final showdown is particularly good, as we get to see Lau Kar-wing in action too.

Well-paced and loaded with action and daft humour, Skinny Tiger and Fatty Dragon is a barrel-load of fun from start to finish. Yes, it hasn’t aged well in places, but if you can get look past this, you’re in for a great time. 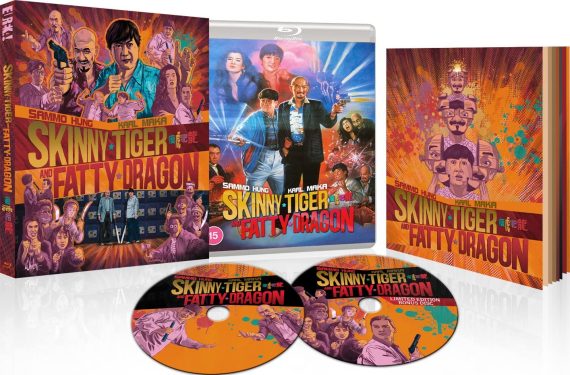 Skinny Tiger and Fatty Dragon is out on 26th July on Blu-Ray in the UK, released by Eureka as part of their Eureka Classics series. The picture quality is first-rate. Colours really pop, it’s super sharp and yet has a lovely natural, lightly grainy look. You get a variety of audio options too (see below).

BONUS DISC: I AM THE WHITE TIGER
– Documentary on the career of stuntman, martial artist, and action director Mark Houghton

The feature-length documentary I Am the White Tiger is the biggest selling point of this limited edition set. It’s not strong enough to have been released as a standalone title but, as an extra feature, it’s most impressive. Houghton is a bit too full of himself for my tastes and the emotional scenes, whilst occasionally effective, feel over-egged in places, but his stories are engaging and he’s certainly led an interesting life. His respect for his sifu, the great Lau Kar-leung, feels heartfelt too and there’s some cool training footage of his students, including a fun short martial arts film they made.

Whilst I enjoyed Frank Djeng and Bobby Samuels’ commentaries on Warriors Two and Prodigal Son, they were largely focused on telling Samuels’ story rather than examining the films themselves. Here, possibly recording in the same block, they’ve exhausted most of his anecdotes about being in the HK Kung Fu film industry though, so discuss the film at hand. I prefer this approach, as I’ve always appreciated the way Djeng explains any cultural references, quirks and gags that will be lost on Western audiences. The pair have a strong chemistry too, so it’s a fun listen.

Mike Leeder and Arne Venema’s commentary has a nostalgic slant as the pair remember Hong Kong from the 90s, when Leeder first moved there. The film was also the first he saw at the cinema in the region. It’s a typically enjoyable track with a clear love for the film and genre, as well as delivering interesting facts about pretty much everyone in the film. 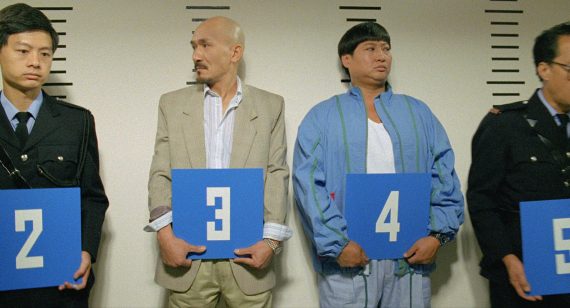 The Lau Kar-wing interview runs for 25 minutes and he seems honest about the inspiration behind the film and in his stories of the production. He also talks about the differences between making films then and now.

Ridley Tsui’s 20-minute interview is similarly frank, filling us in on any secret doubling and wirework. He also talks about Haughton and how he was treated poorly in the industry. Towards the end, he moves to talk about the difference between Hollywood and Hong Kong filmmaking.

Mark Haughton’s interview is only short but specifically focused on the film itself so feels necessary on top of I Am the White Tiger.

The deleted extended fight scene is a nice addition, beefing up an already lengthy and impressive sequence. It’s in rough shape, looking like a VHS transfer, but that was the best version available.

And, of course, you get one of Eureka’s usual booklets, which has an informative essay on the film. It’s not as lengthy as some, but the pages are padded out with some fun publicity material.

So, Eureka once again give a martial arts classic the royal treatment. Another must-buy from the label.