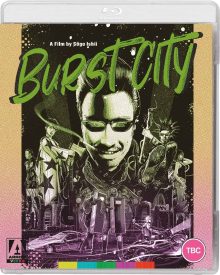 Sogo Ishii (who later changed his name to Gakuryû Ishii) had an unconventional and I’d say very lucky entry into the film industry. Whilst studying film at college, he made his first film, Panic High School on 8mm with friends. Shot in a day and using his own money, it was about 20 mins long.

Ishii organised his own screenings to show this and other shorts he’d made with like-minded young amateur filmmakers of the Kyōei-sha (Crazy Film Group), which he helped form. Panic High School went down well at these screenings and Nikkatsu studio contacted him about remaking it as a feature. He agreed, so long as he could direct. Given that he was still in college and hadn’t worked his way up the studio system ladder like most Japanese directors at the time, Nikkatsu were reluctant to allow this, so struck a middle ground and said he could co-direct the film with Yukihiro Sawada. Ishii wasn’t happy with this but went along with it.

His next feature film, Crazy Thunder Road, was shot on 16mm as his end of year project at University, but Toei bought it and distributed it in Japan. It was a big success considering its meagre origins, so Toei offered Ishii the chance to direct his own studio picture.

The budget offered to Ishii was only modest by Toei’s standards but, for the director, who’d previously self-financed his solo work, it was a huge increase in resources. So, he and his co-writer (Jûgatsu Toi according to IMDB but Mitsuhiko Akita according to Wikipedia) thought they could do anything they wanted, so devised a sci-fi epic (including a huge spaceship and a fight with aliens). However, Ishii soon realised that wouldn’t be possible. The budget may have been big for his usual productions as part of the jishu eiga scene (an amateur, no-budget film movement), but not for studio work. So the script was scaled down and production began on Burst City. 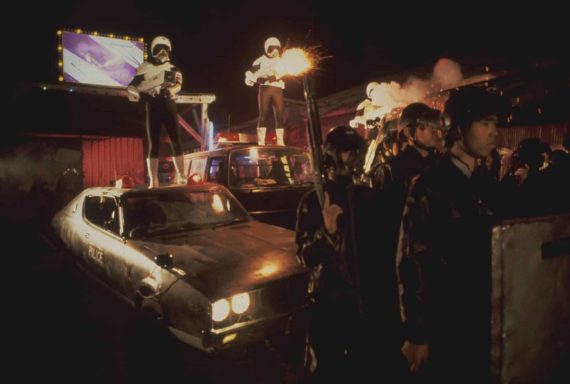 Despite being a studio film, the bigwigs at Nikkatsu didn’t bother Ishii on set, letting him do what he wanted. Due to this, and working with a budget the director still felt was enormous, production went over schedule and over budget, with the shoot becoming a wild party. Once time and money ran out, however, Ishii realised he needed to deliver something, so he quickly finished up the shoot and cobbled the final edit together from the fairly random collection of material he’d shot.

The resulting film was not a commercial success like Crazy Thunder Road but Burst City, along with the rest of Ishii’s early work, went on to inspire future directors. His influence can certainly be seen on Shinya Tsukamoto’s breakthrough Tetsuo – The Iron Man, as well as in some of Takeshi Miike’s work.

To celebrate this seminal film, Arrow Video are releasing Burst City on Blu-ray, with their usual care and attention. I got hold of a copy to see what the fuss was about. 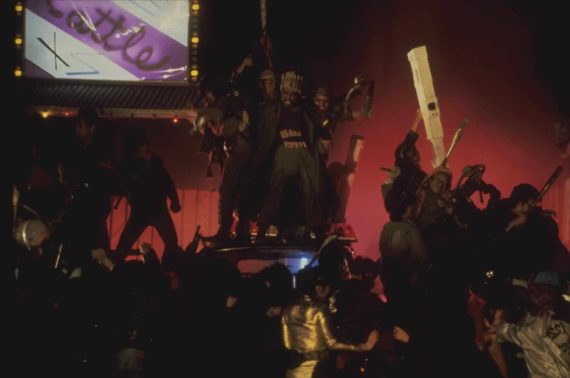 There’s not much of a plot to Burst City. Basically, a pair of mute (other than some grunting and screaming) bikers ride into a city and join a gang of day labourers to find work. The workers, however, are controlled and exploited by a yakuza gang that rule the city (even the police support them).

Meanwhile, we also follow a bunch of punk rockers (made up largely of actual punk rock band members) who, along with their audiences, are fed up of the system and grow increasingly hostile towards it. As the two story strands (if they can be called that) progress, both the punks and the workers stand up against the yakuza gang and powers-that-be in a violent clash.

The chaotic production is clearly reflected in this wild, unhinged spectacle. The first half seems particularly random, with little structure or narrative, but elements are developed a touch in the second half. This descends into utter carnage for much of the final act, though. 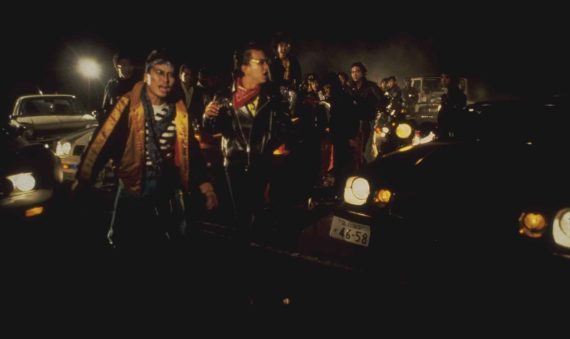 As such, the film is a bit of a mess. Reportedly the edit process was very difficult as the material wasn’t properly logged so Ishii and his co-editor Junji Sakamoto spent a lot of time simply finding matching elements. They didn’t have the money to hire an edit suite either so would do it at night on whatever equipment they could get their hands on, leading them to be tired and hazy during the process. Ishii, in an interview, says “to my mind, the film is still unfinished”.

He says he never intended to make a perfect film though, anyway. “More important was making something that was fast, cool and a bit of a mess. A sort of a middle finger to the film industry as it stood”. Taken like this, the film is a great success.

Most notable is its style. Blending inspirations as diverse as music videos, biker movies, gangster movies and cyberpunk sci-fi, it’s a bit of a patchwork effort, but makes for a thrilling assault on the senses. This is further accentuated by the film’s punk and experimental approach to filmmaking. The camerawork is largely handheld and the lighting erratic and often too low-key to make out what’s going on. This kinetic approach is further built by fast-paced editing and aggressive sound design. 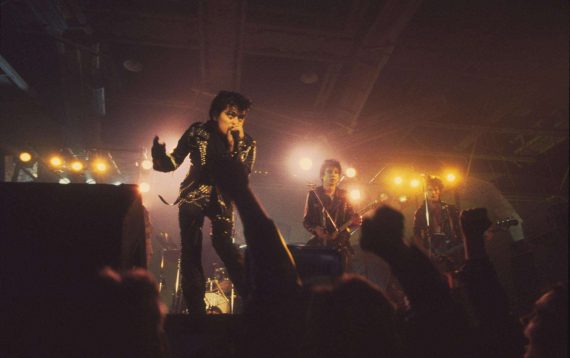 This aggressive soundtrack includes a heavy use of punk rock music by bands whose members are featured in the film, such as the Stalin, the Roosters and the Rockers. It’s music that might not be to everyone’s tastes, but I found it thrillingly propulsive.

The film is totally carried by its style then. I didn’t mind this, as the style is so intensely realised and proved so influential. However, with such a pummeling approach, the film can be a tough watch, particularly given its relatively hefty near-two-hour running time. I feel it would have been much more effective as a short, sharp shock to the system, somewhere around the 80-minute mark, particularly given how slight and aimless much of the narrative is.

There is still much to enjoy and appreciate though, despite the film proving to be a bit of an exhausting watch. There is substance to the film too. It was made at a time when the bubble economy was growing in Japan and Burst City seems to be speaking out against this, presenting young people who were rejecting living their lives in service of the economy. These messages, on top of the film’s style, would influence Tsukamoto a few years later when he made Tetsuo. 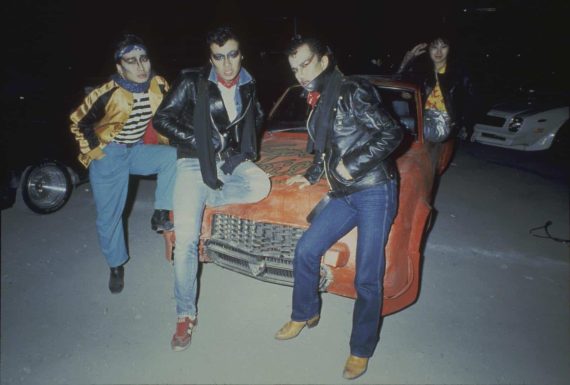 All-in-all then, Burst City is a dizzying explosion of raw energy that’s quite an experience. Unfortunately, it outstays its welcome, becoming quite headache-inducing as it goes on, but you’ve got to admire the film’s style and devotion to the punk attitude. Like the music that inspired it, Burst City is rough around the edges and occasionally incomprehensible but the power and passion remains and carries you forward.

Burst City is out on 9th November on Blu-ray, released by Arrow Video. The picture quality is difficult to rate, as the film was shot on grainy 16mm with poor lighting and a wildly moving camera, so it was never going to look pristine. I couldn’t see any notable film damage though and the grain looks largely natural, other than in a couple of brief moments where it proves too much for the digital process to handle. Equally, the soundtrack was quite roughly mixed and produced, so was never meant to sound pin-sharp, but Arrow have likely done the best they can to replicate its original feel.

There are a handful of special features included in the set too:

Tom Mes, as usual, provides a thoroughly researched, hugely insightful commentary that is vital listening for anyone, like me, coming to the film fresh. The two interviews are fantastic too. Ishii gives a thorough overview of his career leading up to Burst City as well as his recollections of the shoot and thoughts on the finished film and its impact. Yoshiharu Tezuka talks of the jishu eiga in general as well as giving his opinion on Burst City. Interestingly, he counters Ishii’s claim that the director wanted to “a mess”, stating that actually Ishii wanted to make a more conventional piece of entertainment, akin to a standard yakuza film, but the chaotic shoot meant they ended up with an incomprehensible mass of material and so he turned it into a more abstract film.

I didn’t get a copy of the booklet to look at, unfortunately, but the other special features alone make this a recommended purchase, even if the film itself is somewhat flawed and challenging.