Like the actual Black Friday isn’t stressful enough, what with the hordes of demented shoppers lining up for hours to then scour the shops for bargains taking down any other shopper that stands in their way! The staff at We Love Toys are getting ready for such a day but not only do they have to contend with long hours, minimum wage, shitty shoppers, and the revoking of a promised Christmas bonus than a meteorite crash lands into the store quickly turning the staff and customers into rampaging space zombies. It’s then up to a plucky group of survivors to fend off the flesh hungry, shopping mad horde in a bid to make it out the store alive.

Fast and, for the most part, fun zombie caper, Black Friday gets by with its likable cast, single location setting, refreshing reliance on good old practical effects and the almighty Bruce Campbell. As well as featuring as the smarmy store manager, Campbell also produces the flick and while he doesn’t get in on the zombie killing action much his dry wit and palpable charisma are a welcome addition adding a much-needed touch of snarky grit to proceedings. The zombie killing is instead handed to the gutsy cast of toy store staffer such as Devon Sawa, Ivana Baquero, Ryan Lee, and the great Michael Jai White (who is unfortunately killed off all too quickly, damnit!). This game cast is all in on the silly fun and pep up proceedings immensely.

As mentioned, the effects go the more practical route, via some great work from the legendary Robert Kurtzman, leading to some great and gooey monster set-pieces. Slickly photographed and speedy of pace, Black Friday (much like its shoppers!) tears through proceedings and at barely 80 minutes could have benefitted from being a good ten minutes longer: cramming in a little more zombie shopper action. In an attempt to flesh out character, the film does get a little bogged down in some of the character’s melodramatics which threaten to derail the fun on occasion.

The narrative doesn’t quite find enough different to do to set it apart from other zombie run amok flicks (which are still in steady supply these days!) and don’t expect some kind of treatise on consumerism and greed,  but it does build to an effective over-the-top monster finale leaving it open for a sequel.

A case of it’s all been done before but Black Friday has enough charm, kooky characters, and chase action (not to mention a great cast) to coast by and supply 80 minutes of silly zombie action fun. 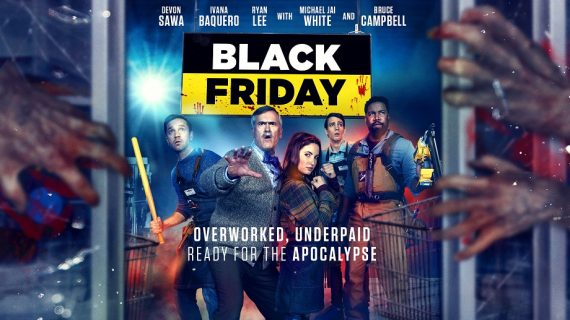