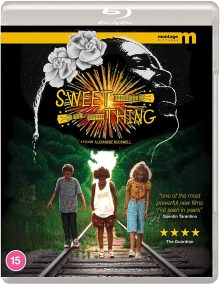 In New Bedford Massachusetts, a dysfunctional family portrayed in all shades of black-and-white, lead forgotten lives. One eventful summer, in an act of liberation, the kids Billie and Nico set off on their own adventure into the fantastic and poetic world of childhood, unseen by the adults around them.

Alexandre Rockwell’s beautiful film, Sweet Thing, is released on blu-ray this week by Eureka!. Told predominantly in anachronistic black and white, the story is raw. So is the method, immediately recalling the style of Sean Baker’s lo-fi Tangerine, though the story is more akin to his second film, The Florida Project. That’s not a film I liked and Rockwell’s take on a child’s point of view is, to my mind, far more successful and affecting.

Sweet Thing was described by Quentin Tarantino as “one of the most powerful new films I’ve seen in years” and it won a slew of awards. It deserves its accolades and in this age of streaming and worrying times about cinema attendance, it’s heartening to see someone like Rockwell grinding work out like this in the foothills, so to speak.

But for welcome lapses into well-judged sentimentality, Sweet Thing has a sense of neo-realism in it’s freewheeling, possibly improvised dialogue. A delightfully clumsy narrative has a suitably childlike innocence; a story is teased out and only feels slightly compromised when forced to coalesce into a faintly silly last act. That said, the relationship between the (real) siblings and their unreliable parents and guardians is never less than real. The ending is uplifting and moving.

The most immediately striking thing about Rockwell’s film is the 16mm black-and-white footage. The second is his leading lady, young Lana Rockwell, Alexandre’s daughter. She gives a beautifully judged performance and the film rests ably on her shoulders. Billie’s namesake, Billie Holiday, makes occasional fantasy appearances to guide her. Just as Elvis did for Clarence in True Romance. It’s interesting that Tarantino would respond so well to Sweet Thing, because True Romance really doesn’t feel like an odd comparison to make to this story. While it otherwise can remind you of Bicycle Thieves and Capernaum in equal measure, maybe it’s the levity of a road movie that helps disarm it.

Lana works with her younger brother Nico in the film and while he has a more passive role, he is no less affecting. Will Patton plays their father in movingly raw but generous scenes with the kids. “You two kids are the only thing that’s true”, Patton says at one point. Very true. Their dad can’t help falling back into alcoholism and their mum’s boyfriend is simply dangerous. In fact, few adults do well in this film.

Sweet Thing is a poetic, honest and rewarding film. It sort of counts as a Christmas film too, so I can’t recommend this timely release enough, despite a lack of extra features. The limited edition nonetheless includes a substantial collector’s booklet, in which Alexandre discusses his film with an infectious enthusiasm.

VIDEO
Alexandre Rockwell shot Sweet Thing on 16mm, mainly grainy black-and-white, the style immediately creating a sense of timeless nostalgia. The comparison ends here, but the look is similar to Kevin Smith’s Clerks, and the films are decades apart. Blu-ray accentuates the lovely imperfections, tight depth of field and lighting. Occasionally, the film dips into colour, usually brief moments of solitude for Billie. The swimmingly dreamlike colours bloom like a Polaroid photograph to wonderful effect. This is a film with considerable identity and full-blooded ambition courtesy of Rockwell.