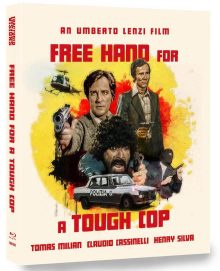 I wrote an enthusiastic review of Fractured Vision’s inaugural Blu-ray release, Silent Action, earlier this year and discovered a newfound love of the poliziotteschi/Eurocrime genre. This was soon followed by a boxset dedicated to the genre from Arrow that I also thoroughly enjoyed.

Fractured Vision are now following Silent Action up with another Eurocrime classic, Umberto Lenzi’s Free Hand for a Tough Cop. Needless to say, I jumped at the chance of reviewing it.

The film sees Claudio Cassinelli play Commissioner Antonio Sarti, who’s tasked with rescuing a young girl that has been kidnapped by criminal mastermind Brescianelli (Henry Silva). To add further urgency to the case, the child has a kidney disorder and requires regular hospital treatment. So Sarti must find the girl soon, before she dies.

In a desperate bid to speed up the process, Sarti enlists the help of the criminal Sergio Marazzi a.k.a. “Er Monnezza” (Tomas Milian). This wacky rogue is in prison though, so the commissioner must break him out as it would take too long to jump through the hoops to get him released.

The pair can’t face Brescianelli and his goons alone though, so Monnezza brings on board a gang of fellow thieves and ruffians. They certainly help the team muscle their way into cracking the case but can the group of criminals be trusted?

Free Hand for a Tough Cop is a rare, early example of a comedy poliziottescho and this is largely down to the quirky performance of Milian. The actor improvised (or at least rewrote) a lot of his dialogue, making clever use of romanesco (Roman dialect) which proved popular with Italian audiences. The character was so beloved he ended up reprising it for a series of films over the following decade.

He certainly chews up the scenery in Free Hand for a Tough Cop and is always a pleasure to watch, even if he’s more than a little over the top with his tics and unusual appearance (what’s with the eye-liner?). He was reportedly difficult to work with and was known to have problems with drugs and alcohol but his performances were a lot of fun.

Writer/director Umberto Lenzi also adds some more subtle humour through various nods to Italian genre movies. Most notably, the film opens with footage from a spaghetti western under the credits, making you think you’ve put on the wrong film at first. It eventually turns out to be a film being watched by Monnezza and his fellow inmates in prison, who make various snarky comments about it.

With this comic slant, there isn’t quite as much social commentary here as in other Eurocrime films, but there is some in the meddling officials that cause problems for Sarti and the kidnapped girl’s father. Also, in showing some extra scenes of crime that aren’t connected to the main narrative, the film paints a chaotic picture of Italy’s ‘Years of Lead’ period.

Lenzi was considered a safe pair of hands in Italian genre filmmaking as he could turn out a solid piece of entertainment without going over schedule or budget. His films would often play well overseas too, which counted for a lot. Here his skills are clearly evident, as he crafts an efficient and thrilling film. It’s blisteringly paced, throwing you into the story straight off the mark and rarely letting up.

As you’d expect from Lenzi and the genre in general, there are some cracking action scenes, including a couple of fairly short but impressive car chases through the city streets. The stunt driving is as hair-raising as always. The violence is pretty bloody too, even if it doesn’t get as gory as some of Lenzi’s later gialli or cannibal movies.

It may be held up by a generic story and a rather preposterous concept (needling criminals for information makes sense, but would you use a bunch of them as your core team?) but Free Hand for a Tough Cop succeeds through excellent pacing, plenty of action and a quirkily charismatic turn from Milian. Great stuff. 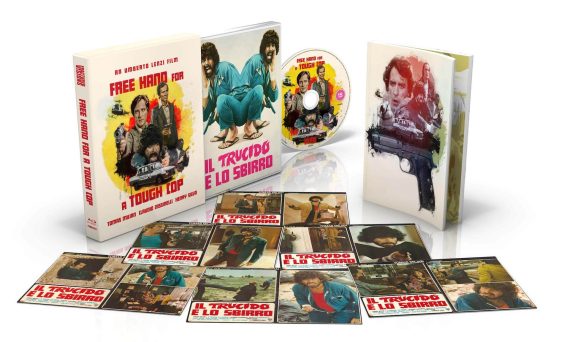 Free Hand for a Tough Cop is out on 29th November on Limited Edition Blu-Ray in the UK, released by Fractured Visions. You can order it directly here: https://www.fracvis.co.uk

The picture quality for Fractured Visions’ first release, Silent Action, another Eurocrime title, was rather disappointing, with an interlaced picture that was soft and quite murky-looking. Thankfully, the picture quality for Free Hand for a Tough Cop is a notable improvement. It seems to be a progressive transfer (hopefully someone can verify for me) resulting in a sharper image. It’s still not quite as sharp and pleasing as most transfers from more established labels, and the colours are a touch oversaturated, but it’s certainly a step in the right direction and looks decent overall.

Audio is solid too and you get a choice between Italian and English tracks.

There are plenty of extras included:

Both commentaries are excellent. The contributors have an incredibly detailed knowledge of the genre and those involved in it, so have plenty of fascinating nuggets to share.

The interview with cinematographer Nino Celeste is very good too. On top of discussing his life and career, he makes some interesting points about the similarities and differences between mainstream, genre and arthouse movies, as well as between modern filmmaking practices and those of the pre-digital era. He also talks about the famous directors and actors he’s worked with, such as Lucio Fulci, as well as Milian and Lenzi.

In Alessandra Lenzi’s interview, she discusses her memories of being on set with her father. It’s an affectionate piece that maybe doesn’t offer much background info on the film’s production but is a valuable addition nonetheless.

Corrado Solari provides a lively and enjoyable interview, as he runs through his career and relationships with directors, actors and other people within the industry. It ends on a deeply personal note, when he talks of how Lenzi offered him a decent leading role on Violent Naples but he had to turn it down due to his wife’s mental health. It’s a decision he regretted as he never made it as a big star but ultimately he had to make that call.

Ugo Tucci’s interview is the shortest in the set but also worth a look. He talks about how he literally grew up in the industry and discusses his work with Lenzi.

Barry Forshaw’s piece is fairly short but required viewing. He gives a brief overview of the Eurocrime genre as a whole and provides his thoughts on Free Hand for a Tough Cop as well as the work of Lenzi as a whole.

The English credits are included too, but these are just white text on a black background, so not really worth getting excited about, but I guess some might feel nostalgia for the English versions they’d seen in the past.

I didn’t get a copy of the booklet to comment on that, but Fractured Visions’ booklet with Silent Action was excellent, if that’s anything to go by.

So, a well-stocked package for a hugely entertaining Eurocrime classic. Highly recommended.