Jean-Pierre Melville was a director who one could quite confidently call an auteur. After being turned down when he applied to be an assistant director in the French studio system, he went independent and set up his own production company and studio. With his films proving popular with audiences in France, he was able to stay independent too, carefully crafting his personal projects without outside interference.

This independence shows in the recognisable style and themes of Melville’s films. One of the most refined examples of this can be seen in Le Samouraï. Released in 1967 to commercial success but dividing critics, over time it has become known as one of Melville’s greatest masterpieces.

It’s a title I’ve been keen to watch for a long time but it’s long been denied a home video release in the UK, for whatever reason. So, as you might imagine, I practically jumped for joy when Criterion announced they would be adding the title to their UK collection. Needless to say, I snapped up a copy to review and my thoughts follow.

Le Samouraï follows a fairly straightforward narrative. Alain Delon plays Jef Costello, a hitman who is hired to kill a nightclub owner. He does the job as promised, but is seen by the resident pianist (Cathy Rosier), as well as a few other staff members.

Jeff is brought in by the police for questioning, but his alibi, which he’d carefully pre-planned with his lover Jane (Nathalie Delon), and some uncertain witnesses allow him to be set free. As Jeff meets his contact (Jacques Leroy) for payment, however, he narrowly avoids assassination himself. It seems his employer doesn’t trust that he won’t be caught and, indeed, the police (led by commissioner François Périer) keep a persistent watchful eye on the hitman.

Like in his later film, Le Cercle Rouge (which I reviewed here last year – https://blueprintreview.co.uk/2020/11/le-cercle-rouge-studiocanal/) Melville strips back plot and dialogue to craft a minimalist crime masterpiece. Instead of superfluous side plots or speeches, he focuses on the details of both Jeff’s methods and the work of the police as they attempt to catch him. Melville has always enjoyed exploring expert professionals at work in this way and here it is refined to a remarkable degree. For instance, we watch as Jeff meticulously tries key after key from a huge set, in order to steal a car for a job. We also see the police commissioner’s methodical approach to getting the evidence he needs to either hold or release Jeff when he’s brought in for questioning.

Equally striking is the film’s style. As well as adopting a Japanese concept for his title, Melville has a carefully composed formality to his frames, much like the Japanese cinematic masters. This approach was not limited to this title in Melville’s oeuvre, showing that the director, who was famously knowledgeable in films in general, likely had a great admiration for the cinema of Japan.

Delon perfectly understood Melville’s approach and style, so was a perfect fit for the lead role. He was drawn to the fact the script had so little dialogue for him and, after hearing the title when he first met with Melville, asked the director to come to his bedroom and showed him a samurai sword hanging on the wall. He went on to work with the director on two other films, following this, and is known to have been deeply shaken by Melville’s death in 1973, aged only 55 years. 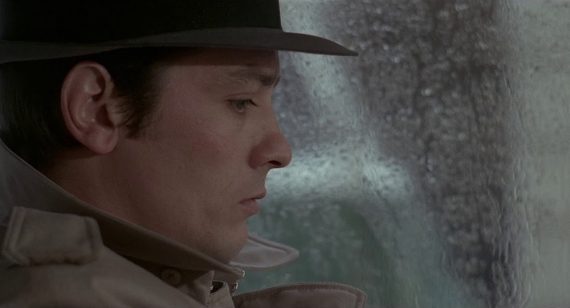 Delon is stony-faced and icily cold, but there’s a sadness behind those steely eyes and the scenes in Jeff’s small, empty apartment offer a rare glimpse of the character’s fragility and humanity. Equally effective is François Périer as the driven police commissioner and Delon’s wife, Nathalie, adds subtle depth to her small but important role, as does Cathy Rosier. Melville famously focuses his films on men, for the most part, but the two key women in Le Samouraï have just enough substance under the surface to avoid any misogynistic slant.

The film is expertly edited too, with a strong sense of pace, slowing it down or ramping it up at appropriate moments. Key reactions and details are effectively and efficiently placed too. Melville’s eye for detail makes for a deliberate pace, on the surface, but, with time never wasted on unnecessary extras or hefty chunks of dialogue, tension is effectively maintained and the film never feels overlong.

Overall, Le Samouraï is quiet, sombre and stunningly realised. It’s a masterclass in style and visual storytelling that oozes cool from every frame. It’s sheer cinematic perfection and very much lived up to my lofty expectations. Le Samouraï will be released on Blu-ray on 6th December in the UK, as part of the Criterion Collection. I was slightly concerned about the picture quality in the opening scene, as it looked a bit rough, but it must be something to do with the way the footage was processed to accommodate the title credits as the rest of the film looks great. Grain is fairly thick but natural and the image detail is impressive. Melville’s cold colour palette seems well captured too. The audio is equally flawless.

– New high-definition digital restoration, with uncompressed monaural soundtrack on the Blu-ray
– Interview from 2005 with Rui Nogueira, editor of Melville on Melville
– Interview from 2005 with Ginette Vincendeau, author of Jean-Pierre Melville: An American in Paris
– Archival interviews with Melville and actors Alain Delon, François Périer, Nathalie Delon, and Cathy Rosier
– Melville-Delon: D’honneur et de nuit (2011), a short documentary exploring the friendship between the director and the actor and their iconic collaboration on this film
– Trailer
– PLUS: An essay by film scholar David Thomson, an appreciation by filmmaker John Woo, and excerpts from Melville on Melville

Rui Nogueira, in his interview, talks of the film’s perfection. He discusses Melville’s importance and personality in general too, describing how exacting the director was in every aspect of the filmmaking process.

Ginette Vincendeau describes how she believes Melville was the first French filmmaker who said he learnt his craft from watching a lot of films, before the New Wave more famously did it, coming from a background in criticism. She offers a brief but illuminating analysis of the film too.

The collection of archive interviews is wonderful, allowing the film’s principals (some of whom are no longer with us) to discuss their work on Le Samourai. The excerpts are only short, but the questions and answers are all well-considered, so it’s a strong piece.

Melville-Delon: D’honneur et de nuit is another decent piece, looking at the relationship between Delon and Melville.

I didn’t receive a copy of the booklet to comment on the essays and book excerpts.

So, not quite as loaded with extras as some of their releases, but still a typically excellent disc from Criterion.