Visually striking Climbing takes advantage of its unique animation style to bring audiences an uncomfortable viewing experience that still has you increasingly leaning forward as the story continues. Kim Hye-mi’s psychological body horror sticks with you long after the credits have rolled.

After recovering from a car accident, professional climber Choi Se-hyeon believes she is pregnant just before the World Championships. At the same time, she receives mysterious text messages from ‘herself’ who seems to have been through a quite different life after the car accident. And most importantly, she wants to keep her baby.

The closest you could link to the animation style is to that of Telltale Games, the makers of The Walking Dead, The Wolf Among Us and Batman video games. The 3D style but with images akin to 2D causes a few moments to adjust to, but for a film such as Climbing, it works tremendously. The style needs that slight deviation from the norm to work as well as it does. This is not to disregard the story, but having this in a different format allows us to give more attention to the story. When it turns into that psychological thriller and builds layer upon layer to the story, you are as enthralled as you are disturbed.

The animation allows us to question anything and everything, who is the real Se-hyeon? Is it the one we start the film with who has recovered but is still haunted by the accident and has an overwhelming fear that the accident has ruined her career aspirations? Or is it the Se-hyeon on the other end of that phone, which is still pregnant but almost locked up in her partner’s mothers’ home as she recovers from being in a coma? 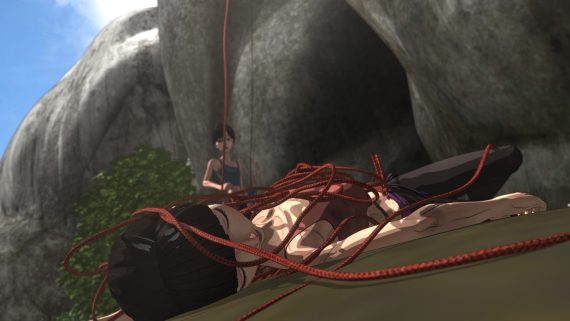 There will be a lot of talk about the chosen animation style here, yet the film’s true strength is in the script. There are so many themes running through Climbing that all connect and mesh exceptionally well. For example, we have themes of addiction to being the person you once were after a traumatic experience. Yet also how women are continually trying to break away from the norms of what is expected of them, to settle down, get married and have children.

Se-hyeon has a goal, and she does not want to have anything get in that way; she has to make it to the World Championships and win it. To show to not only herself but also those around her that she isn’t too old for this sport and that she isn’t too hurt from the accident. She can do it and be damned what anyone else thinks. This determination soon comes to the fore in the final act as the two Se-Hyeon’s encounter multiple challenges. There is so much going on that it is almost vital that you go into Climbing as blind as possible.

Other themes such as grief, PTSD, the fears of pregnancy. Kim Hye-mi somehow keeps it all together here for a memorable viewing experience; there are shades of other films in Climbing, but make no mistake, this is very much its own beast. Nevertheless, the sheer ambition of this film needs to be applauded for how successfully it is pulled off.

Climbing will likely run under the radar for audiences but make no mistake; this is a film that you have to try and watch. A wonderfully smart film that is utterly fascinating and compelling, and you need to see it immediately.