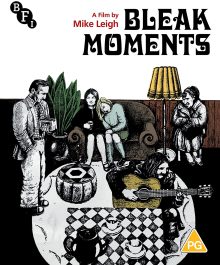 A number of labels are releasing titles from Mike Leigh’s prestigious back catalogue this year to celebrate his 50th year of filmmaking. The BFI though, on top of releasing one of his most highly regarded films, Naked, are going right back to the start and polishing up Leigh’s debut feature, Bleak Moments.

Made in 1971 for only £18,700, it was largely funded by Albert Finney plus £100 from the BFI, whose token figure meant it could be classed as an experimental film. It started life as a stage play Leigh had put on. It wasn’t a straightforward adaptation though. The play just formed the basic idea. Leigh still went through his later well-known process of developing the story and characters through improvisations and workshops with his cast before distilling the ideas down into a script.

I’m a latecomer to the work of Leigh but have fallen in love with it over the past few years (other than his most recent two titles, which I wasn’t a massive fan of). As such, I’m still playing catchup with many of the director’s films, including Bleak Moments, so I got hold of a copy to share my thoughts. 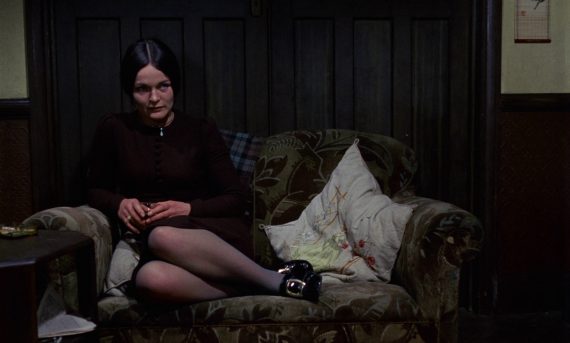 The film centres around Sylvia (Anne Raitt), a secretary living in London with her mentally disabled adult sister, Hilda (Sarah Stephenson). Sylvia is living quite a miserable existence, struggling with the daily grind and fed up with her colleagues at work. These include Pat (Joolia Cappleman) who looks after Hilda occasionally but doesn’t really click with Sylvia.

Some hope comes in the form of a potential love interest. Peter (Eric Allan) is a schoolteacher who regularly bumps into Sylvia as they walk to work and the pair awkwardly organise a couple of dates. Whilst these don’t prove to be as romantic as hoped, another glimmer of light in Sylvia’s life emanates from Norman (Mike Bradwell), a young man who rents out her garage to print a counter-culture magazine for his friends. His singing and guitar playing offers some respite to the two women he shares a roof with, though his crippling shyness, alongside Sylvia’s own, make their relationship a little strained.

It’s this failure of communication between all of the characters that forms the film’s key theme and, in fact, its substance in general, as there is little in terms of plot. In his contributions to the disc, Leigh says Bleak Moments is “about the unsaid things”, emotions that are repressed and non-communicative. The tragedy of the film is that the characters have the potential for warmth, humour and companionship but their inability to effectively communicate destroys it. It’s about “waste of potential and lack of fulfilment” as Leigh puts it, which are key themes of much of his work. 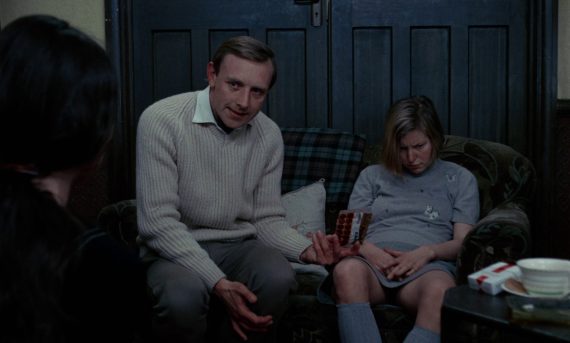 There are a couple of notable outbursts of emotion that rattle you when they appear, despite their minimal nature, and these provide dramatic moments in an otherwise very low key film. The pared-down plot and long, awkward, dialogue-light conversations that drive the film make for an experience that can be slow and tedious but that’s wholly the point. It might not make for a thrilling experience, so the film won’t be for everyone but, if you’ve got the patience for it, there’s much to appreciate and enjoy.

Personally, I was hooked. It helps that I could very much sympathise with the characters, being rather awkward and shy in social situations myself but, also, I tapped into the quietly comic side of the film bubbling under the surface. There’s a subtle, knowing sense of humour behind Sylvia’s stone-faced demeanour, for one. She cracks little jokes here and there and seems to see the humour from the desperate situations she finds herself in. Indeed, that’s what I found funny in the film too. It plays like an early predecessor of the ‘cringe comedy’ style that would later be made famous with TV series like I’m Alan Partridge and The Office. A climactic evening drink between Sylvia and Peter is particularly squirm-inducing and uncomfortably hilarious. 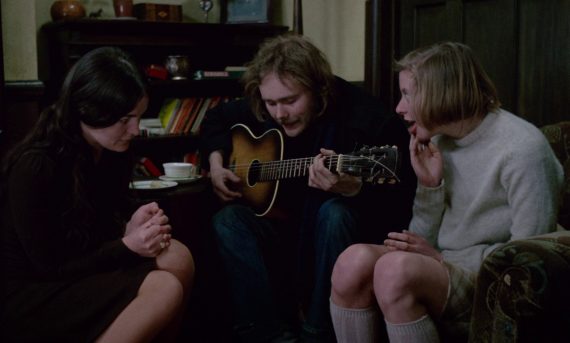 As usual with Leigh’s work, the film also feels wonderfully authentic, despite any slightly larger-than-life elements that creep in (though there are very few here in comparison to some of his later films). On top of the performances and surface elements such as Leigh’s use of locations and production design, I liked the fact Norman’s guitar playing was not very good but still managed to effectively add warmth to the lives of Hilda and Sylvia.

The film looks nice too. Leigh hadn’t yet begun his long-running relationship with cinematographer Dick Pope. Bahram Manocheri has the job instead here and he works very well with the small, cramped interiors. Shots are carefully composed without looking overly staged. Great use is particularly made of the kitchen hatch in Sylvia’s house, acting as a frame to symbolically either trap or distance the character from her visitors. 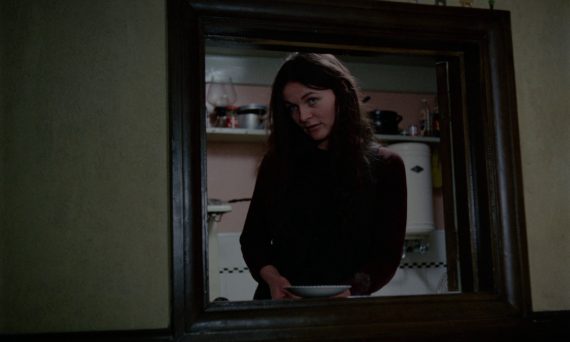 So, from his first feature, Leigh effectively set out his stall for what was to come. It’s got even less narrative drive than usual for the director, so is rather slow-moving, but Leigh’s strength for crafting memorable characters and relatable small-scale drama is as remarkable as ever.

Bleak Moments is out on 29th November on Blu-Ray, released by the BFI. The transfer is impeccable. It’s clean, detailed and boasts rich, natural colours. The stills used in this review are screengrabs from the disc, so will give you an idea of the quality. With regards to audio, the dialogue is a little hard to make out at times, though this is partly due to the nature of the film and Leigh mentions in his commentary that there were issues with the audio during production. So it isn’t a fault of this remastered release.

The film is complemented by a decent set of bonus features:

– Newly remastered by the BFI, overseen by Dick Pope and approved by Mike Leigh
– Audio commentary by writer and director Mike Leigh (2015)
– Bleak Moments: 50 Years On (2021, 9 mins): a short interview with Mike Leigh as he looks back on his debut feature
– In Conversation: Mike Leigh and Leslie Blair (1972, 28 mins): in this rare archive interview director Mike Leigh and producer and editor Leslie Blair discuss Bleak Moments
– Interview with Mike Leigh (2019, 36 mins): filmed after a screening of his 1976 film Nuts in May, Mike Leigh discusses his early career and his approach to filmmaking with film programmer Neil McGlone
– Image Gallery
– **FIRST PRESSING ONLY** illustrated booklet with a new essay on the film by Ellen Cheshire, original Sight and Sound review and full film credits 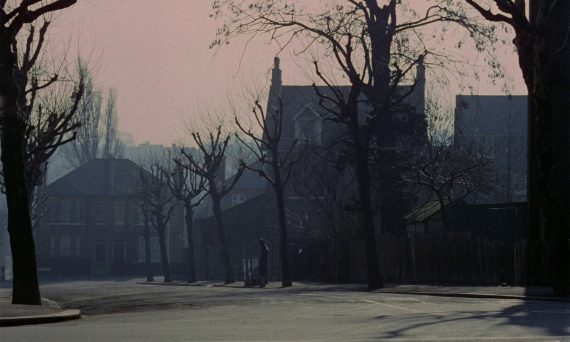 The extras are very Leigh-heavy but there isn’t too much crossover and he’s always a pleasure to listen to. In his new introduction, the writer/director says he’s proud of the film but can understand people who find it tedious, due to the nature of it. He gives a nice overview of the film’s background and the ideas explored.

His commentary is excellent too. He really gets to the bottom of what the film is about, as well as giving some background on how it was developed and produced.

The Nuts in May interview is very good too. It obviously spends a lot of time on that film but he discusses his unique development style in general so it’s still a worthwhile piece here.

The archive interview on the release of Bleak Moments is also a fine addition to the set. Leigh and producer/editor Leslie Blair spend most of the time discussing the problems they had in distributing the film. As such, it might not interest everyone, but having experience in making low budget films, I found it an interesting debate.

As usual with the BFI’s releases, you also get a booklet. This provides a piece looking at Leigh’s beginnings and subsequent career as well as an excellent period review from Sight and Sound.

It’s a strong package overall then, making for a warmly recommended purchase.