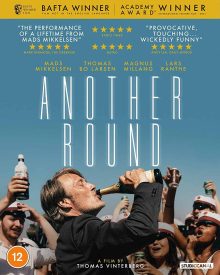 The concept of Thomas Vinterberg’s Another Round (a.k.a. Druk – ‘binge drinking’ in English), which centres around a bunch of middle-aged men experimenting with being drunk every day, sounds like a Will Ferrell comedy from the early 2000s. However, the film was released to great critical acclaim and practically hoovered up gongs during awards season, including the Oscar for Best International Feature Film.

With this in mind, as well as being a fan of both the director and star, Mads Mikkelsen, I was keen to see the film but, for some reason, I didn’t get out to the cinema very often last year (I heard a rumour about some sort of virus going around). Thankfully, Studiocanal are now releasing Another Round on Blu-ray, DVD and digital platforms in the UK. I got hold of the Blu-ray and my thoughts follow.

To expand on my brief synopsis above, Another Round sees Mikkelsen play Martin, a school teacher who’s lost his once renown zest for life. His disinterest in everything around him is affecting both his marriage and his career. The latter becomes devastatingly clear when a group of pupils and their parents stage a kind of intervention, pleading Martin to put more effort into his work before the encroaching final exams. 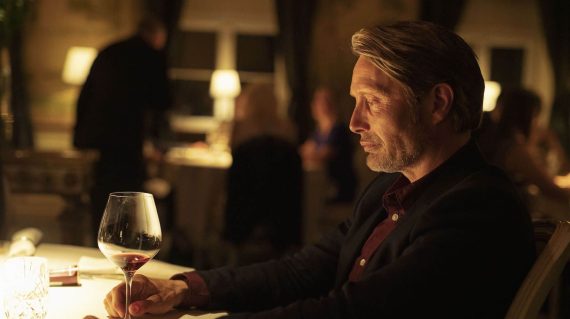 Later that evening, Martin and three of his colleagues (Thomas Bo Larsen, Magnus Millang and Lars Ranthe) meet at a restaurant to celebrate the youngest of the group turning 40. Nikolaj, the ‘birthday boy’, tells his friends about a theory by psychiatrist Finn Skårderud, who explored the idea that humans are born with a blood alcohol content (BAC) deficiency of 0.05, and that topping this up with just the right amount of alcohol could increase creativity and enhance mood.

The group initially fob off the idea, but Martin, who breaks down during the meal and opens up about his depression, decides to try having a ‘little nip’ the next day at work. Indeed, he finds that it does have a positive effect on his mood and performance.

Reporting back to his friends about this, the group decide to conduct a ‘proper’ experiment, testing Skårderud’s theory more accurately. They follow strict rules to keep their BAC above 0.05 during the day but to never drink after 8 pm or on the weekends, to keep from falling into alcoholism. 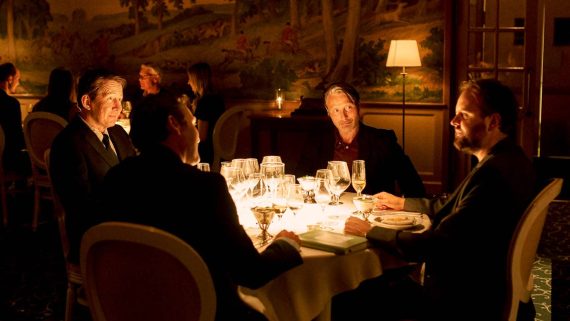 The teachers all find that the drinking helps improve their work and the passion in Martin’s marriage initially reignites too. However, as their actions begin to arouse suspicion, most notably after experimenting with higher BAC levels, flaws appear in the theory.

Another Round is a film about mid-life crises as much as it is about alcohol. Its central characters are all stuck in a rut in various ways, either bored of their jobs, lonely, living with a disinterested wife and kids or fed up with being constantly peed on by potty-training toddlers. The experiment gives the men some newfound purpose and focus, on top of the chemical changes to their bodies.

Soon to turn 40 myself and having gone through some similar crises to those of the film’s protagonists, I could easily connect with Another Round. However, I must admit I was a little disappointed in the film, overall. 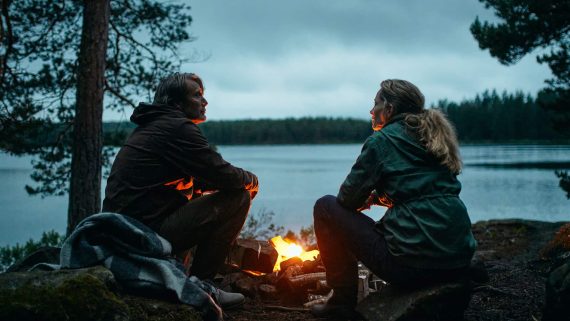 It’s hard to put my finger on what was lacking, as it’s very well directed and performed as you might expect from the names on the credits. Mikkelsen is particularly good, showing a great range as his character runs the gamut of emotions. It’s all done with great restraint too, other than a few key scenes where Martin lets rip, most notably in a showstopping finale.

I appreciated the balanced view of its subject matter too. Vinterberg states in his interview on the disc that he didn’t want to make a film about the dangers of alcohol as we all know them. He just wanted to explore various aspects of drinking and its place in society, both positive and negative. The film doesn’t shy from the latter but tries not to take a moral stance on drinking. Though I’m not a drinker myself, I hate nothing more in films than being preached at, so Vinterberg’s approach here is welcome. Also, like in Festen and several other of his films, the director sensibly injects a dose of humour to make the drama more real and to vent after any of the tougher aspects that might crop up. The heavier drinking sessions are particularly funny. 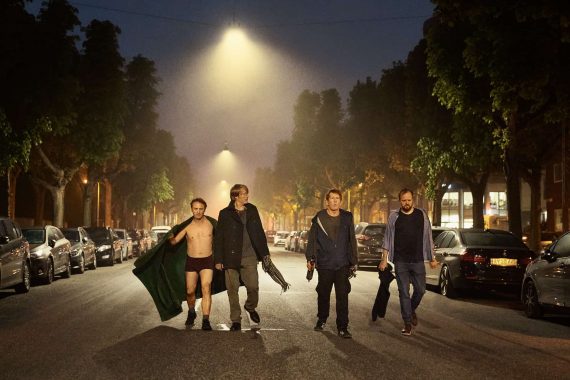 However, as mentioned, I was still left a little shortchanged. Perhaps it was all the hype surrounding the film, but the message that unfolds, to embrace life, let your hair down and connect with those around you, felt a touch trite. It’s an admirable ethos to follow, I guess, but was a little cornier than I’d expect from Vinterberg. The general idea is clear from early on too, meaning the journey the film takes following this feels a little overdrawn.

I also thought some of the dramatic shifts in the story seemed a bit abrupt. Maybe there were too many characters and aspects to cover, meaning Vinterberg had to rush through things to pack it all in, but it lurches around in places.

Overall though, I did enjoy Another Round. It boasts a fine central performance and some wonderful scenes, but the storytelling, on the whole, was a little disappointing, so I didn’t feel it quite lived up to the hype.

Another Round is out on Blu-ray, DVD and digital platforms on 27th September in the UK, released by Studiocanal. I watched the Blu-ray version and it’s pristinely presented, as you’d expect from a new release like this.

The only special feature is a 13min interview with Mads Mikkelsen & Thomas Vinterberg from the Festival de Cannes 2020. It’s excellent though, with the pair discussing the theme and intentions of the film in detail.