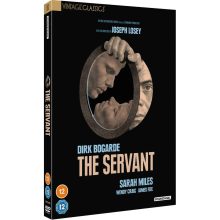 I have to be honest in saying that The Servant is a movie that never came onto my radar until this 4K release. Even with my obsession with Bong Joon-ho’s masterpiece Parasite,  Bong himself has said that The Servant was one of his biggest influences for his own Oscar-winning movie in 2019. How this piece of information flew over my head is extremely baffling, but regardless, I was sold and now needed to see Joseph Losey’s 1963 classic, The Servant.

It took all of five minutes for me to be instantly pulled in by the tone that was being set within The Servant. The musical score that is composed by John Dankworth is absolutely stunning as it plays over the opening scene. The camera follows Hugo Barrett (Dirk Bogarde), who is currently making his way to a job interview with the wealthy aristocrat Tony (James Fox). When Barrett finally gets the attention of Tony who is currently in the middle of a nap after having a few beers at lunch, they immediately get into the conversation about what the job entails. Tony gets straight to the point, he is buying the house that they are currently standing in, and he wants Barrett to basically be his servant. 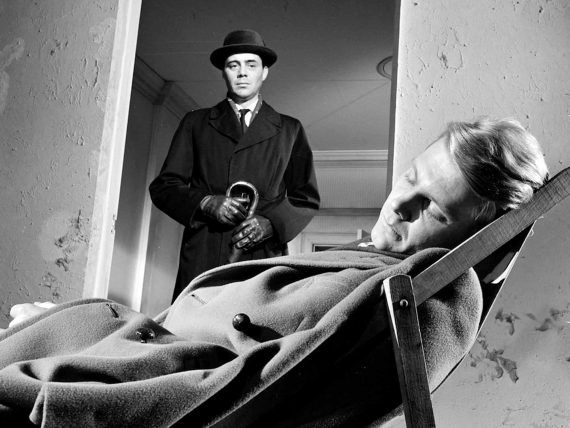 It is made clear very early on that something is off with Barrett, he has this overly calm presence and almost seems to look at Tony’s dramatic actions as comedic in ways. But no matter what, you can tell that Barrett wants to do the best job possible. Tony then introduces us to his girlfriend, Susan. She seems to find many of Tony’s ways of life very entertaining it seems, especially when she hears the news about Tony getting himself a servant. Once Susan gets the opportunity to meet Barrett, it really does not take long for her disliking to begin for him. Finally, we get the missing piece of our puzzle. Barrett approaches Tony about his sister Vera(Sarah Miles) and how she is currently looking for a similar line of work. Considering Tony clearly has no money problems, it really does not take much for him to bring her on as the maid. It is really around this point that you can start seeing the Parasite connection, but in no way does it feel like any sort of carbon copy tale. 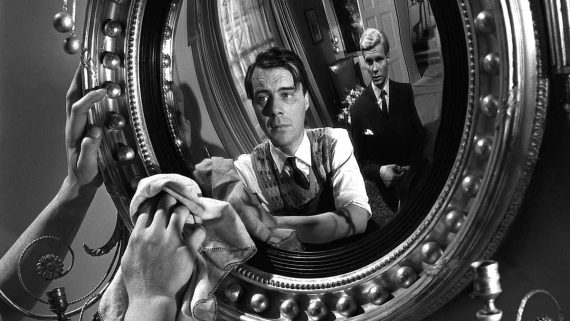 For me, that is as far as anyone should go with explaining the general premise of The Servant. What may seem like a basic plot is absolutely not the case here, it is just that being someone who has watched this for the first time with little knowledge about the story, the payoff was nothing short of phenomenal, and I would simply not want to spoil a single thing. There are so many twists and turns that I could not get over the character development that was unfolding before me. All the performances throughout are superb, but I have to say that both Dirk Bogarde and James Fox are a pure masterclass to learn from. Their relationship with each other really is quite something to watch. Bogarde’s facial expressions are off the wall and at times sinister, while Fox at times has a comedic quality that stuck out. There is one particular moment where Tony slugs a glass of brown ale, and up to this point knowing him and how upper class he is, this particular moment I found so hilarious because of the reaction performed by Fox.

This is a 4K UHD release and I am sure for many fans of the movie that they are going to be ecstatic with this transfer. It truly is phenomenal, the grain is still there but it looks so modern. The lighting and audio are perfect. This disc is easily the definitive version. I have to say that in terms of transfers both The Servant and the recent release of The Babadook are my personal favourite 4K discs of the year so far.

You also get a nice collection of bonus features:

Unfortunately, I only got to review the 4K disc, but being a physical media junkie and after watching this movie three more times this week, I absolutely needed to have this in my collection. The extras and booklet sound essential. The Servant is a masterclass in filmmaking, performances, and story, and any person that watches movies in cinephile, or casual form needs to make this a priority. What a year for physical media collectors, this is one of the best discs of the year of a complete masterpiece.

THE SERVANT opens in cinemas on September 10 and on 4K UHD Collector’s Edition Blu-Ray, DVD and Digital on September 20 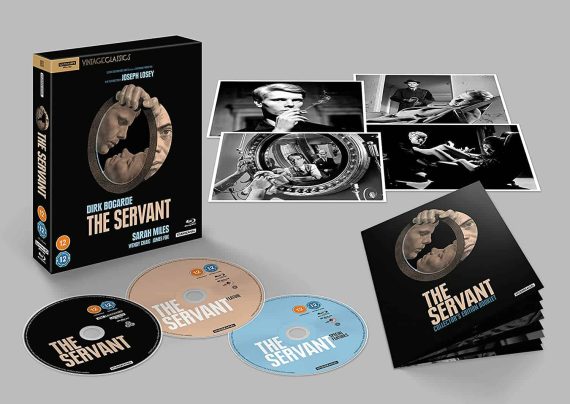