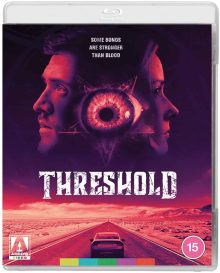 Please note: Due to a production delay of the Blu Ray disc, this review will only cover the film Threshold (watched via an online screener) and not the extra features.

When I was at college, the idea of being able to shoot an entire feature film on a phone that could comfortably fit in my pocket would have blown my mind. Yet that is where we are now, with accessible devices at our fingertips that have effectively democratised the film making process. In theory, anyone can now pick up a phone and make a film. An age old difficulty still remains, however. If it has become far easier to make a film, it is still just as hard to find an audience, perhaps more so today than ever before due to the explosion of content that is constantly clamouring for our attention.

Threshold, newly released by Arrow Video, is one of the luckier films to be plucked from obscurity and presented to the world in a stacked Blu Ray edition. Shot on two iPhones over 12 days, using a crew of three and featuring largely improvised dialogue, Threshold’s production background certainly doesn’t inspire much confidence. It may sound snobbish (and people should still absolutely go ahead and do it if they have the inclination and the passion) but just because you can make a film doesn’t necessarily mean you should. Threshold could turn out to be mini masterpiece, but equally it could turn out to be an amateurish car crash. The very fact that Arrow were releasing it, however, filled me with hope.

In fact, Arrow should be applauded for continuing to bring strong genre films from the festival circuit to a wider audience, as several of their recent releases have done. In this sense, just reading the plot of Threshold shows that it fits right into Arrow’s wheelhouse. After not seeing her for years, Leo suddenly finds himself drawn back into contact with his sister Virginia, who has a history of addiction and substance abuse. Although she seems to be clean, something else is troubling her. Virginia eventually confides to Leo that she has been subjected to a sinister ritual that has bound her emotions and physical sensations to another man. Despite being cynical and disbelieving, Leo agrees to take Virginia on a cross country road trip to find this mysterious man in order to free her. The only question is, is this all in Virginia’s head, or is she actually telling the truth?

The first thing to get out of the way is that, despite being shot on iPhones (which at times looks abundantly clear, most strikingly during a scene set at an outdoor cafe) you soon get used to the less refined aesthetic of the film. Indeed, Powell Robinson (who held the dual roles of both co-director and cinematographer) manages to capture some astounding landscape shots that look like they belong in a film with ten times the budget. Like Tangerine before it, Threshold goes to prove it doesn’t really matter what a film is shot on. A movie shot with the best equipment on Earth can still be bad while a film shot on the cheap can turn out to be phenomenal.

Unfortunately, however, Threshold turns out to be more closely aligned with the former than the latter. The first problem is, despite being marketed as a horror film and the film playing host to familiar genre elements that recalls It Follows or Kill List, these elements only serve to bookend the movie rather than being an integral part of the whole. After the taunt plotting of the opening, a potentially terrifying narrative is then abruptly discarded, which sees the film disjointedly turn into a loose, woolly road trip that feels more like a mumblecore indie than an edge of your seat horror. The fusing of different genres can work, of course, sometimes spectacularly so, but only when each of those constituent parts hold up. Unfortunately for Threshold, it focuses the majority of its running time on two characters who simply are not that interesting; perhaps some cleverly scripted dialogue would have helped to alleviate the problem and given Leo and Virginia some depth and interest, but when that dialogue is heavily improvised (which is fine for a comedy, yet a risk for a drama) the inherent problems magnify rather than dissipate.

The first time the film stumbles in this manner is in the perviously mentioned cafe scene. The dialogue is loose and rambling, which makes the whole scene feel like offcuts from a student project (a sense only compounded by the video quality, a rare instance where the iPhone cameras hinder rather than help). This unfocused, meandering dialogue continues throughout Leo and Virginia’s road trip. They frequently stop off at motels on their journey, where the film quite happily pauses to allow them to discuss their childhood and share memories. This would be fine if there was anything of interest to listen to, but Leo and Virginia are so dull it’s akin to having to sit through a display of a stranger’s holiday photos; fascinating to them, earth shatteringly dull to you.

Threshold occasionally remembers it is meant to be a horror film during a few erratic, unbelievable encounters and the ending, when it finally arrives, is suitably creepy. Indeed, there is an argument to be made that the power of the conclusion is enhanced due to the juxtaposition of the film’s overriding sense of normality coupled with the ending’s more supernatural overtones; yet you also get the feeling that it comes too little, too late, and despite some genuine chills, it can’t save Threshold from all that has gone before.

There are the bones of an interesting horror rattling around here and Threshold should prove to be an inspiration to aspiring filmmakers to just go out there and make something. While the film successfully manages to escape the confines of its meagre budget and limited production values, at times even being visually breathtaking and downright creepy, it unfortunately stumbles far too often in maintaining a gripping narrative or populating that narrative with engaging characters. In this respect, it commits the biggest movie sin of all, that has nothing to do with the size of the budget or the skills in front of and behind the camera. That sin is to bore its audience and in this respect, Threshold sins a lot more than most.

Threshold is out to buy now on Blu Ray, DVD and Digital. Please note that there was an error found on the Blu Ray disc, for which Arrow are offering a disc replacement programme.