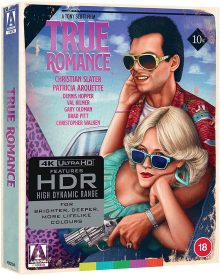 The spectre of popular culture has a way of distorting reality. Look up any review or critical appraisal of True Romance and invariably it will be described as a Quentin Tarantino film. Far be it from me to belittle the contribution of the screenwriter to a film’s whole but it is rare for it to be top billing. The director, Tony Scott, was hardly a nobody. In fact, it can be argued that he was one of the most successful film makers of this genre for the whole period. True Romance, however, is undoubtedly a Tarantino right down to its core.

For those who have never seen the film, the film tells the tale of a couple (played by Christian Slater and Patricia Arquette) who on the back of a whirlwind romance and marriage, come into possession of a large quantity of cocaine. What would be a simple ‘dealer wants stolen drugs back’ storyline is embellished on in true Quentin style. Slater’s character, Clarence, is advised and guided by an imaginary Elvis impersonator. By comparison, Arquette’s character, Alabama, is more simply a call girl who was originally bought as a birthday present before the chance meeting. Yeah, Tarantino doesn’t do vanilla characters and True Romance is full of characters who have multiple motivations that link to their current predicament in addition to their life experiences and dreams.

Each character is usually linked to everyone else by a single degree of separation and the scripting uses this to the full. When characters meet, it is usually an introduction by or about a common friend. The plot carries an air of unknown throughout as few of the characters know each other well enough to have any form of predictability. 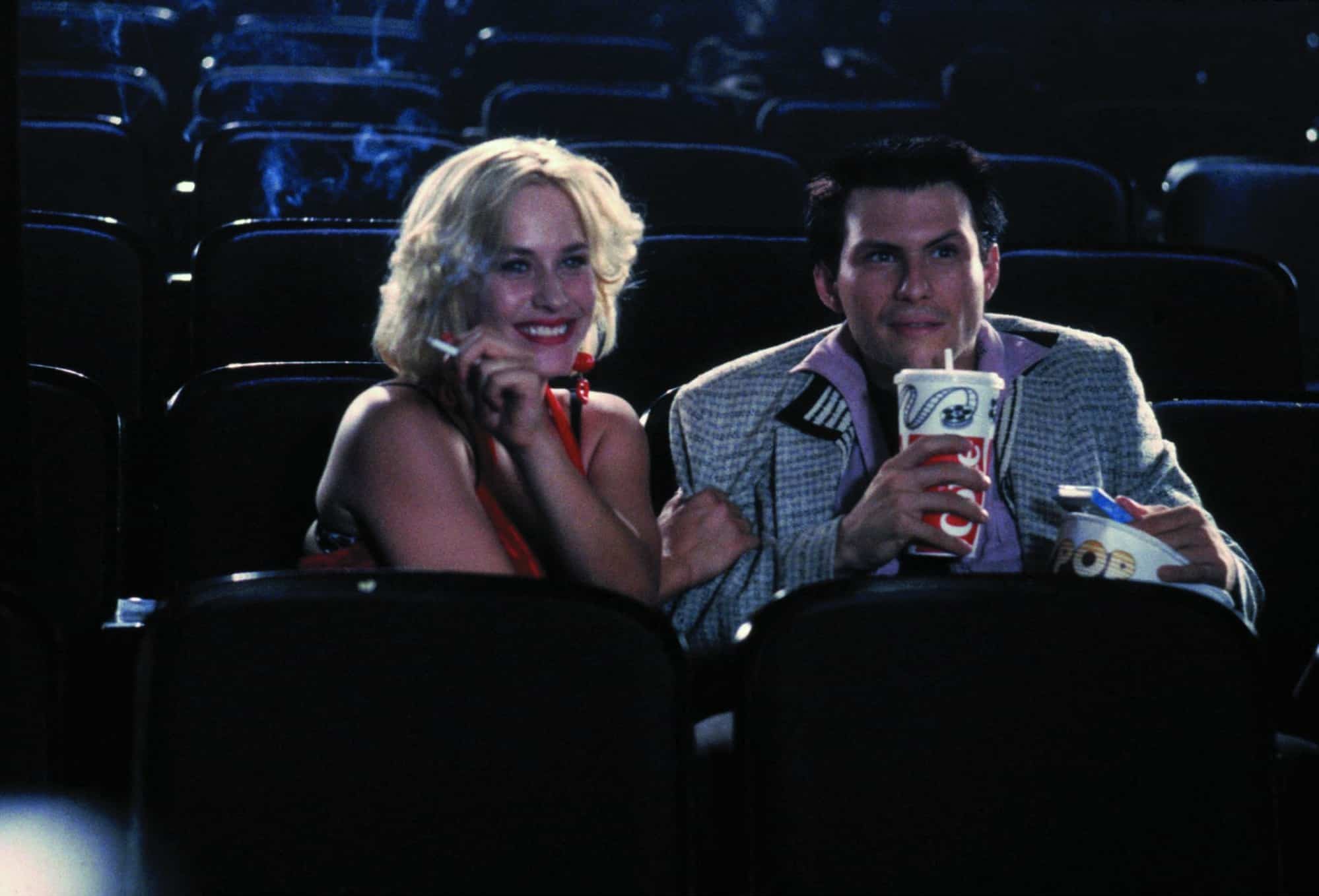 Tarantino movies have always had a style of being all about the set pieces and True Romance has many examples of this in abundance, many of which foreshadow similar scenes in similar movies. The standout scene featuring Christopher Walken and Dennis Hopper as the mob boss and Clarence’s father bears a familiarity to the opening scene of Inglorious Basterds with Christoph Waltz. There is a building sense of dread as each second of dialogue ratchets up the tension until we reach the climax. Tarantino uses the interrogation setup a few times more in the film with differing results to illustrate the menace of each party involved.

Even by today’s standards of gathering all-star casts, True Romance is perhaps matched only by its contemporary Michael Mann’s Heat in delivering star power throughout. Aside from the aforementioned stars, we have Gary Oldman, James Gandolfini, Val Kilmer, Brad Pitt, Samuel L Jackson and Michael Rappaport alongside favourite character actors such as Saul Rubinek and Tom Sizemore. It is an Avenger style gathering of Neo Noir royalty, including the director and writer themselves. It is a real delight to see so many recognisable faces at the top of their games and many have been celebrated numerous times over the course of their career.

In retrospect, True Romance is maybe the premier example of the entire period and genre. The tropes and style would go on to dominate genre film making for years to come and lay the groundwork for the success and fame of a burgeoning screenwriter. Even at these early stages, Tarantino was eager to pay homage to the art form it was trying to conquer. Tarantino’s desire to showcase the wealth of cult films that inspired him is never missing from the screen for long.

It was noted for being a film with extreme violence at the time and while by modern standards it can feel like something we have seen many times since, the scene with Arquette defending herself still packs a punch. There is no doubt that it deserves its reputation.

To say there is a lot to get through, is a gargantuan understatement. I will try and focus on the features that are new and unique to this release. Luckily, this film has had fully featured releases throughout its time and the features on those have been added to, rather than just supplemented.

Yes, you read that correctly. There are four commentaries to accompany the film. Each fills a certain need. Scott talks about getting the gig and taking an exceptional script and converting it to screen and the decisions made by each. Slater and Arquette get to talk (and laugh) about the experience from a cast point of view and listening to Tarantino talk about one of his creations is essential viewing / listening, especially as he recants that much of the film is autobiographical in spirit. The new commentary by Tim Lucas looks to add to these already excellent features by focusing on the legacy of the film, including cast and crew, as well as giving some insight into the cultural relevancy of many of the aspects of the film. It is probably my favourite of the three tracks as it gives a little bit of everything and presents some interesting theories, insights and views from someone who is unashamedly a fan of the film.

As if the above commentaries were not enough, we have six incredible selected scene commentaries that take some of the most pivotal scenes in the film. They are all great and give great insight into how each person was cast in the film, but special mention goes to the Michael Rappaport commentary and the Dennis Hopper commentary. Hopper’s is notable as that scene is one of the greatest in modern cinema history and Rappaport’s for his exuberance for being part of such a project.  To have two of the other actors provide new insight is incredible.

A new set of interviews filmed to provide insight from the crew themselves in addition to a look at the impact the film has had in the years since. These were great fun to watch as well as beautifully shot and presented, even when they are repurposed audio interviews or zoom interviews (compare to archive footage). These interviews really added a personal touch to the release that shows how much a labour of love these types of releases are. To single out one of the interviews for watching, the ‘Cadillac Man’ interview showcases the legacy of the film through a fan who comes across just like an ordinary man and not the rich collector. To see how the car from the film has been restored and loved over was truly something special.

Scenes removed from the film, which given their number and length provide an opportunity to spend more time with each of the characters in addition to expanding on some of the motivations and plot points contained in the run time.

An interesting look at an alternate ending enhanced by the commentaries that accompany these. I am always in two minds about watching non-canon endings but given how extensive the release is, it is a must for inclusion.

Archive material from the set and time of the film. It is interesting to see how different modern special features and interviews have progressed over the years. Much of the footage is reused from interviews and featurettes but there are aspects and input that are only seen here such as hearing from Gary Oldman about his role.

True Romance is a film that I grew up with and continues to grow in my appreciation every time I revisit it. The film has never looked better. Admittedly, my only other viewings of this film have been on the DVD copy I have at home, so you can forgive my jaw for dropping when I hit play on this release from Arrow Video. Astonishing is the word that spring to mind, and it brought an emotive response each time I watched. It is hard to think of a more definitive release of any movie in my collection but this release from Arrow Video feels like one that many like-minded people seem to be sleeping on. It’s a five-star release of a real 90s classic that begs to be devoured. I’m sure Elvis would agree.