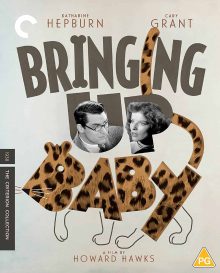 Howard Hawks was a director that could successfully turn his hand to a range of genres, making several classic westerns, gangster movies, film noir and war movies, to name a few. This level of versatility is often attributed to journeymen director-for-hires but Hawks had his own unique style that made him a favourite among early auteur theorists, leading to him becoming one of the most beloved of classic Hollywood directors.

A particular key element of Hawks’ style was the fast pace of his films and his penchant for rapid-fire dialogue. This meant one of the genres he was best suited for was comedy and, indeed, he made some of the best. In particular, Hawks was one of the originators of the screwball comedy boom in the 30s and 40s, with his Twentieth Century (reviewed here – https://blueprintreview.co.uk/2021/03/twentieth-century-indicator/) released in the same year as the other early genre trendsetter, It Happened One Night. It was Hawks’ next two screwball comedies, Bringing Up Baby and His Girl Friday, that would prove to be his most popular though (over at time at least).

After releasing His Girl Friday on Blu-ray in the UK a few years ago (review here – https://blueprintreview.co.uk/2017/01/his-girl-fridaythe-front-page-criterion-collection/), the Criterion Collection are now turning their hand to Bringing Up Baby. I love screwball comedies and haven’t seen the film for a long time, so got hold of a copy to review. 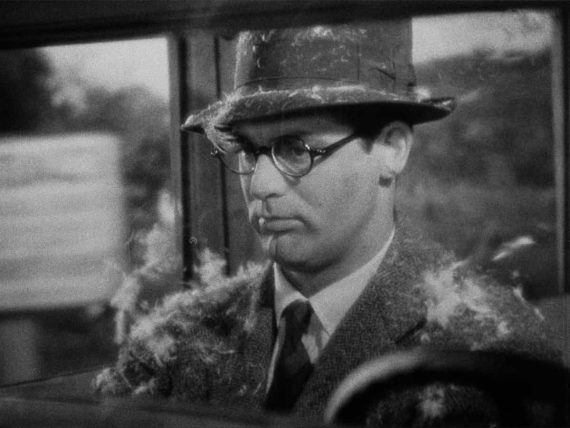 Bringing Up Baby stars Cary Grant as David Huxley, a straight-laced palaeontologist who’s looking forward to a double celebration in his work and home life. For one, the final bone (the “intercostal clavicle”) of his prized brontosaurus skeleton has been located and is on its way, whilst in his personal life he’s due to marry his dour fiance Alice Swallow (Virginia Walker).

Before all the celebrations can begin though, Huxley has the job of trying to talk lawyer Alexander Peabody (George Irving) into recommending that his wealthy client Elizabeth Random (May Robson) donates 1 million dollars to Huxley’s museum. He attempts this over a golf game but, during this, he meets Susan Vance (Katharine Hepburn) who continues to put a spanner in the works of Huxley’s plans.

Susan keeps cropping up everywhere, causing Huxley to fall into various embarrassing and distressing predicaments. This is further enhanced when Susan falls in love with Huxley, causing her to make it her mission to keep him by her side as long as she can. This begins with strong-arming him into helping her do something about the pet leopard her brother has sent her from Brazil. 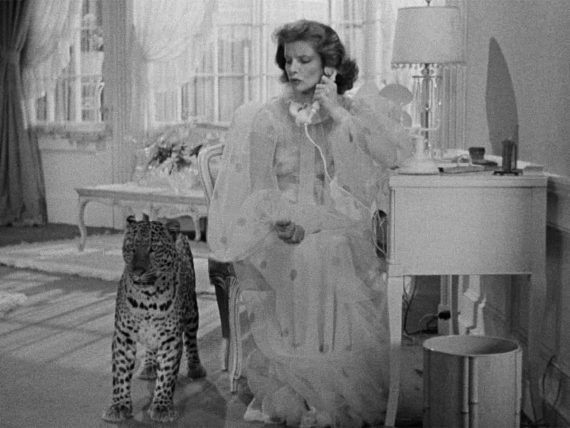 The pair end up on a farm in Connecticut, where we discover Susan lives with her aunt, Alice Swallow, who Huxley was trying to coax money out of for the museum. Unfortunately, with all the shenanigans going on, Huxley isn’t doing a good job of winning over aunt Alice. He’s more preoccupied, however, by trying to find the intercostal clavicle that Alice’s dog has buried somewhere in the vast farm grounds.

All the while, Susan watches over the chaos with glee.

Though critically acclaimed and now widely acknowledged as a classic, Bringing Up Baby was a commercial disappointment on release. It was almost the nail in the coffin for Hepburn after a series of flops and some believed the reason the film under-performed was the fact that audiences weren’t interested in watching a film she starred in. 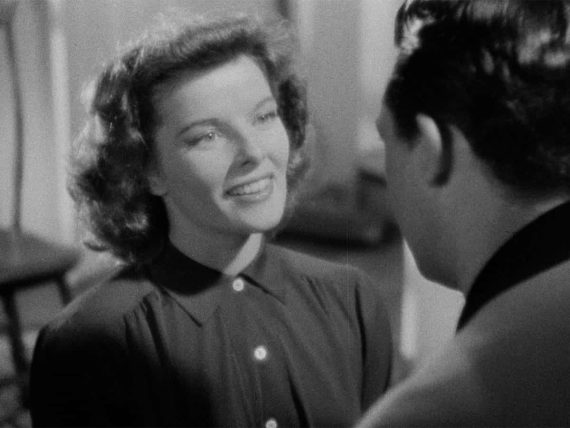 This is hard to believe now, as Hepburn is one of the most beloved Hollywood actresses of her generation. Her performance is also one of many highlights of the film. Her free-spirited but gleefully manipulative Susan is a pleasure to watch and Hepburn is clearly relishing the role. Reportedly the whole idea for her character, around whom the film revolves, is based on the on-set relationship between Hepburn and John Ford whilst filming Mary of Scotland. She was the only person to get away with tricking and teasing the director, providing the inspiration for Susan having fun with winding up the square Huxley.

Grant matches this perfectly too and the pair’s chemistry together is electric. This was the first of five films he made with Hawks, so the pair clearly clicked here. Grant can often be seen as a smooth, suave type, so it’s fun to see him play the butt of most of the jokes here as the uptight, put-upon Huxley. Bringing Up Baby is pure farce, getting most of its jokes through playing the situations, rather than through sharp, witty dialogue, so it relies greatly on the strength of its performances. As is to be expected from Hawks, the dialogue comes thick and fast though and, whilst not laden with witticisms, it’s immensely quotable. 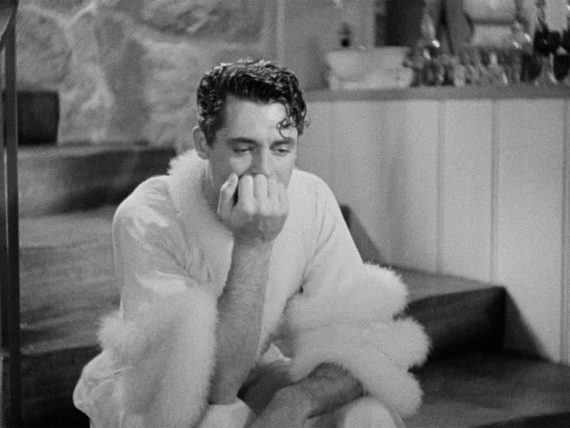 The script is wonderfully constructed too. The mishaps are piled upon Huxley yet these seemingly chaotic incidents lead to a hugely satisfying climax and conclusion that bring all the elements together perfectly.

With a shoot that involved live leopards and dogs, as well as some hidden special effects to bring all of these together, it can’t have been easy to make. So it’s a testament to Hawks and his team that it all seems so effortless. His use of long takes, allowing the actors to truly play off each other and bring each scene alive, also helps keep the energy up.

I don’t want to over-analyse things though, so I’ll end by saying that Bringing Up Baby is screwball comedy at its finest. Featuring two of Hollywood’s greatest comic stars at the top of their game and directed by the inimitable Howard Hawks, the film is a veritable torrent of hilarity from start to finish. 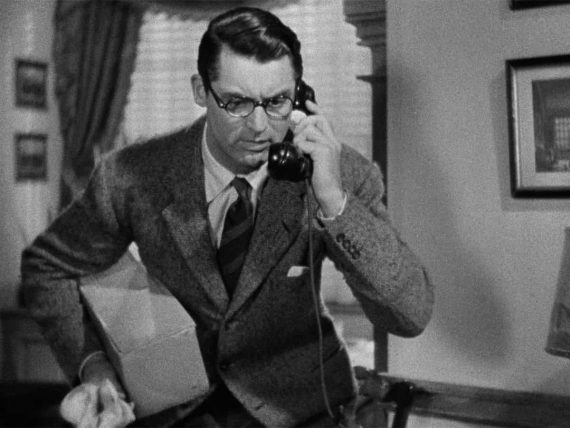 Bringing Up Baby is out on 26th July on Blu-Ray in the UK, released by The Criterion Collection. The picture quality is very good for a film of its age. As is generally the case with films from the 30s, the image is a little soft but there’s very little damage on the print and it has a consistent, pleasingly natural look. Audio is clean and clear too.

It comes with an impressive array of extra features. These include: 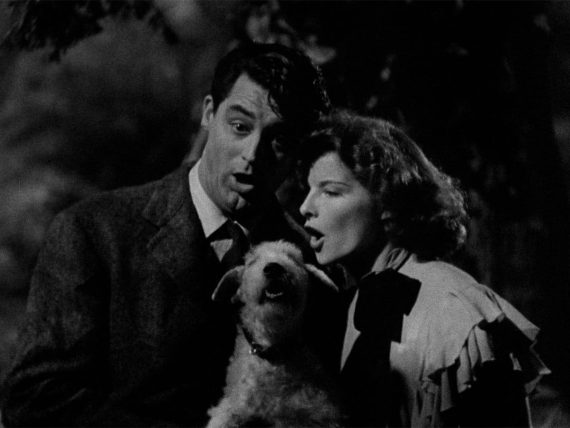 Bogdanovich’s commentary is quite low energy but he does a good job of deconstructing how the gags work and he clearly loves the film, as you hear him giggling along throughout.

The selected scene commentary focuses on the work of the films costume designer, Howard Greer. It’s not a field I’m hugely interested in but I always appreciate a different perspective on lesser considered aspects of filmmaking so I appreciated its inclusion and it made me give the film’s costumes a second look.

The essay on Grant helps appreciate the craft that goes into the actor’s performances and helps respect him for more than just playing himself, as is often wrongly presumed.

Bringing Up Baby is not thought of as a visually spectacular film but the short piece on its cinematographer John Bailey shows how the camera helps sell the comedy. It also highlights the fact that Bailey was one of Hollywood’s best DOPs.

Similarly, the effects featurette helps you appreciate the hidden effects work in the film as well as praising the work Linwood Dunn did elsewhere.

Grant’s audio interview is a lot of fun with the actor on top charming form.

The audio interview with Hawks is surprisingly slow-paced with Bogdanovich awkwardly trying to pry out answers, but I guess the director was pretty old at that point and perhaps his interviewer was a little young and nervous too.

The best extra though is the Hawks documentary. Over an hour, the legendary director warmly recollects his lengthy career and tells of his interests away from film. It’s anecdote heavy and never self-aggrandizing. I enjoyed it a great deal.

It’s a wonderful set then with plenty of extras to dig your teeth into, supporting one of the all-time great films. Highly recommended.