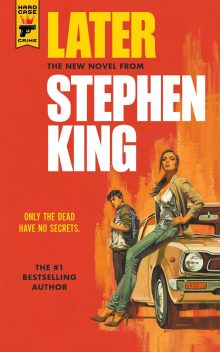 “Only the dead have no secrets”

Jamie Conklin is no ordinary kid, he has the ability to see dead people. But as he clearly states very early to the reader, “it’s not like that movie with Bruce Willis.” What Jamie has come to realise is that by having conversations with the dead, any questions he asks, the dead have to tell the truth.

Being raised his entire life by his literary agent mother, Tia, Jamie is a very confident kid from the get-go. He is learning to live and understand his so-called unique way of life. However, Tia also knows about Jamie’s ability to see the dead, and it is only normal that she is extremely worried and wants Jamie to keep it a complete secret.

That is until New York City Police Department detective, Elizabeth “Liz” Dutton comes into the picture. Liz finds out about Jamie, and when there is a killer who has threatened to murder from beyond the grave, so begins a very intense rollercoaster ride for Jamie Conklin.

This is the third Stephen King release in the Hard Case Crime series. We previously had The Colorado Kid (2005), followed by Joyland (2013). Later is the longest release yet in this series, and I have to say that it’s my favourite so far.

I love that King every now and then will step away from the setting of Derry. Later is set in New York and it immediately feels different, in a good way of course.

Jamie Conklin is a superb character from the very first page, as most of his story is told in POV fashion. It just really makes the depth of his overall character and personality come to life immediately.

King once again does a phenomenal job at keeping the reader hooked on pretty much every page. Even though it’s technically a crime book, there is so much here for the fans of King’s horror side. I won’t spoil, but there are encounters that Jamie has with a particular dead person, and the way King has written these moments are just so brilliant. You can perfectly see the scenes, and they are absolutely terrifying.

The only thing here and it’s no surprise really, it is almost a parody at this stage, does King end the story with a home run? I am normally very satisfied with the majority of endings in King’s books, some fans have been more vocal. But I will say that there is a certain plot reveal that I feel some readers will be lukewarm over.

It completely caught me off guard because it comes out of nowhere and there is absolutely no way you can see it coming, but once I let it sink in after, I can now say that I am very satisfied.

Later is highly recommended for all readers.