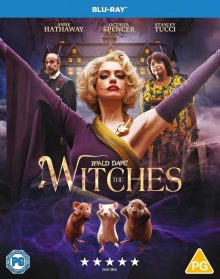 Following the death of his parents, a young boy moves to live with his Grandmother. After an encounter with a strange woman, he discovers a shocking secret – Witches are real and they enjoy hunting children! Fleeing to an expensive hotel, the intrepid pair encounter the evil Grand High Witch and uncover her plan to transform all the children of the world into mice – can they stop this evil plot in time?

Published in 1983, one of children’s author Ronald Dahl’s later novels, The Witches is a notoriously mean spirited tale of evil, child hating women who work nasty magic to transform unsuspecting kiddies into various unfortunate animals. A story that has faced controversy of the years for its perceived misogynistic undertones, it is nonetheless a classic of children’s literature and has already had one film adaptation in the form of the Nicholas Roeg directed, Jim Henson produced 1990 feature film. While critically well received, Dahl famously hated this version of the story for taking numerous liberties with the source material, including introducing a “happy ending”.

So, fast forward 30 years and here we have a second attempt at transforming The Witches into a film, this time directed by veteran filmmaker Robert Zemeckis (Back to the Future) Released in the midst of the Covid-19 pandemic, the 2020 Witches famously abandoned its planned cinema release in favour of going straight to streaming on Warner Bros’ recently released HBO Max service in the US, while hitting Premium VOD around the rest of the world with a disc release soon after.

Within the opening 15 minutes of its brisk 106 minute run time, Zemeckis’ take on Dahl’s novel feels like it’s trying to carve its own path. Setting the action in 1960’s Alabama with one foot firmly within the African American culture and society of the era, Zemeckis’ film opens with the bittersweet tone of the boy’s loss (here given no name except Hero Boy and played by Jahzir Bruno) and his grandmothers (a wonderful Octavia Spencer) attempts to give him as normal a life as she can, this opening retains Dahl’s dark wit yet introduces a warmer feeling of family drama into the story. 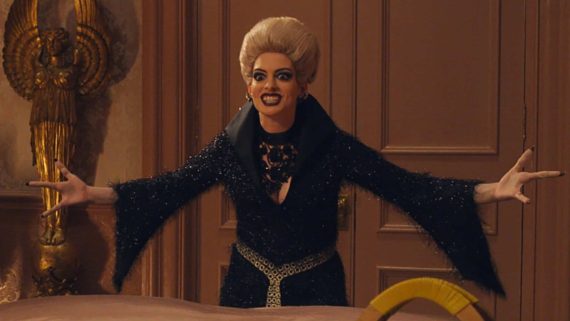 After the boy’s encounter with his first real life witch and the journey to the hotel, the film briefly finds some interesting touchstones that feel as if they are going to drive the story in a subtly different direction, with the suggestions of prejudice found at the expensive hotel. Both the black footmen and the hotel’s manager (a funny but largely underused Stanley Tucci) find it surprising in their own ways that the guests staying in one of their more expensive rooms are a single, elderly black woman and her grandson. There’s an unexpected bite to this and a sense that this version of the witches will be about more than just the hatred of the titular villains towards children but, alas, this freshness is rather short lived and disappears quickly upon the arrival of the Grand High Witch and her band of cronies.

Played with beautiful darkness in the 1990 adaptation by Angelica Huston, Zemeckis has here cast Anne Hathaway as the lead villain. Hathaway is a good actor, having previously appeared in such well received genre fare as The Dark Knight Rises, Interstellar and Colossal, but she feels remarkably miscast here, hamming it up with an unidentifiable and generic “European” accent. Sure, this is a comedy, but the Grand High Witch is notoriously one of the baddest of the bad villains of children’s literature and here she’s reduced to feeling like a rejected Monty Python sketch.

It’s at this point that the film also begins to show its schizophrenia, ditching its warmer elements of family drama and socio-political subtext in favour of Looney Tunes style antics and overblown CGI. It’s the latter element that also marks another large departure from both the original adaptation and source material and also blunts the stories teeth. As always, the Witches disguise themselves as beautiful women to hide their true, hideous visage (here it’s explicitly explained that they are not actually women, but demons, presumably to avoid the historic accusations of misogyny). In the classic stories, this was elongated fingers, blunted feet and bald heads with the exception of the Grand High Witch who also wears a mask to hide her shrivelled features. While the first three elements of the Witches physiology still ring true, they are also given the additional disfiguration of elongated mouths, hid by (as my eldest son put it) “Joker scars” at the corners of their lips. When the witches show their full Cheshire Cat grins it’s clear that there was a visual desire to show something horrifyingly akin to, say, Pennywise the Clown from It, however it comes across as far less scary and far more goofy, and combined with Hathaway’s prime ham it robs the story of any bite it may have had. 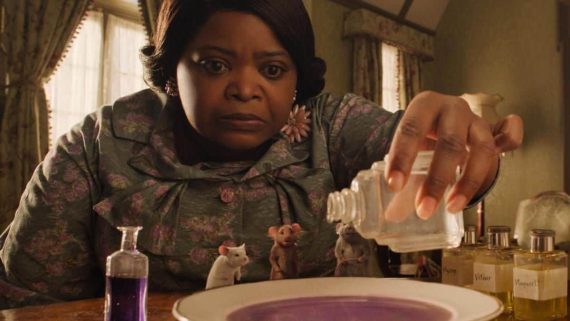 Where the visuals start to come briefly into their own, however, is in the good use of macro photography. When the boy and his friend, Bruno, finally fall foul of the Witches mouse making plot and are turned into rodents themselves, the cinematography deploys some interesting fish eye, mouse level shots, similar to those seen in films like Ant-Man, to get in among the legs of the larger cast members and project a sense of scale that the 1990 adaptation could not. It’s visually appealing but rapidly narratively undermined by another change to the source material which I shan’t go into as it is a bit of a spoiler. Suffice to say, the character that is introduced into the story to aid Bruno and the boy is rendered incredibly superfluous. There is no narrative purpose for them and they seem to have been placed into the story to simply create another “hero”. Likewise, this adaptation goes with the darker ending of the novel but quickly blunts its impact by adding caveats and a more uplifting coda. Unlike the hinted subplot of racial prejudice at the start of the film, these changes feel unnecessary and superfluous – ultimately that kind of sums up this new adaptation.

It’s good to look at and generally well acted, but adds little of any real substance or meaning to the source material to elevate it over Roeg’s 1990 adaptation. It’s a curious one when you look at the filmmakers other than Zemeckis involved, from names such as Alfonso Cuaron and Guillermo Del Torro, you feel like there was a film with a darker edge here at one point, one that’s almost hinted at by that opening 15 minutes, but one which is quickly swept under the rug for a more standard and flashy adaptation. A disappointing effort.

Perhaps it’s a result of Covid-19, perhaps it’s an indication of distributors focussing more on digital distribution, but this Blu-Ray release of The Witches comes with a rather slim selection of special features. The three featurettes are largely of the soundbite EPK variety and contain a great deal of overlap in their content, while the gag reel is forgettable stuff. Of more interest is the deleted scenes taken from the start and the end of the film and hint at a richer drama that was perhaps present in the script prior to studio interference. It is indeed possible that there was a very different version of this film at one point in time that could have been more compelling than this final cut.