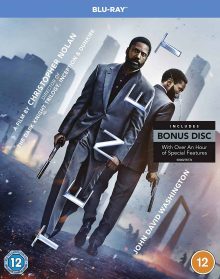 Christopher Nolan’s latest mind-bending blockbuster, Tenet, had a difficult journey to cinema screens. For a long while before its scheduled 17th July 2020 release date, vague but intriguing teaser trailers and posters were released, drumming the director’s rabid fanbase into a frenzy. It was set to be one of the most hotly anticipated films of the year. Then COVID-19 happened.

Many films, most notably No Time to Die, got continually pushed back and some went straight to streaming. Nolan seemed hell-bent to avoid his latest work, much of it shot on IMAX cameras, from being rushed to underwhelming home screens though. He and his producers at Warner Bros. stood their ground on the release date, hoping things would die down by the summer. As July approached though, they nudged the date back a bit to the end of August (early September in the US).

With infection rates reduced in many countries at that time, Warner Bros. stuck to their guns and the film came out, much to the relief of cinema chains who were running older releases and less marketable indie titles. The risk didn’t pay off though. Even if many screens were back open by that time, not everyone was comfortable with sitting in a room full of strangers for two-and-a-half hours during a pandemic. The $200 million blockbuster only made $58 million in the US ($363 million worldwide), a relatively poor showing for what was essentially the only blockbuster of the summer released in cinemas. 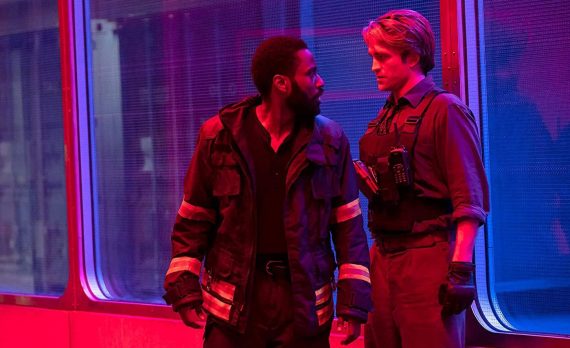 There are some that claim COVID wasn’t the only reason Tenet underperformed though. Reviews of the film were mixed and many complained it was overly complicated, not helped by sound mixing and design that made dialogue often barely audible. You can’t expect people to turn out in their droves to a head-scratching physics lecture that is drowned out by an overactive air-conditioning unit.

I was one of the people hesitant about watching the film on its release, due to both the risk of infection and its lukewarm reviews. However, I was still curious about it and Tenet is not without its fans, so when I was offered a screener of its Blu-ray release to review I leapt at the chance.

The film sees John David Washington play ‘The Protagonist’, a CIA agent who unknowingly passes a test during a dangerous operation that gains him access into a secret agency whose code word is tenet.

This organisation has discovered weapons and agents from the future that are inverted in time (i.e. work/move backwards). They believe a powerful Russian arms dealer, Andrei Sator (Kenneth Branagh), is involved in a plot to use time inversion to put an end to life as we know it. The Protagonist, with help from the mysterious agent Neil (Robert Pattinson), is ordered to get close to Sator’s estranged wife, Kat (Elizabeth Debicki), in order to infiltrate the villain’s inside circle and save the world. 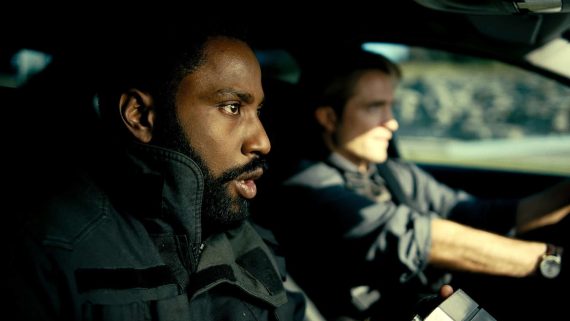 In these brief terms, Tenet seems far less complicated than you might be led to believe. However, once the standard and inverted worlds cross paths and our hero must use inversion himself to set things right, things get pretty mind-boggling.

Nolan has long been interested in playing with our perception of time and concept of reality. Here he takes an idea that’s difficult to get your head around and really goes to town with it. As with Inception and Interstellar, however, Nolan has a tendency to get too bogged down in the science of it all to make for a satisfying narrative-led experience.

There’s far too much exposition, particularly in the first half, that is dense with scientific explanation and concepts that are difficult to understand through mere vocal description. It all gets too much at times. I realise Nolan feels the need to fully explain his fascinating ideas and show that they are generally based in real scientific theory. However, when you’re wading through reams of dialogue that are thrown at you at a rapid pace, often during explosive action sequences, it’s frustrating rather than thought-provoking. I personally prefer a ‘show and don’t tell’ approach to cinema. I realise that’s difficult to do when you’re dealing with complicated scientific theory, but I’m sure a better balance could have been achieved. Watching the behind the scenes documentary on the disc, for instance, helped make better sense of some of the set pieces by colour-coding a pre-viz overview of the action. If some sort of visual aid like this could be incorporated into the plot somehow, it would make for a much smoother viewing experience than the frantic information dump we get instead. 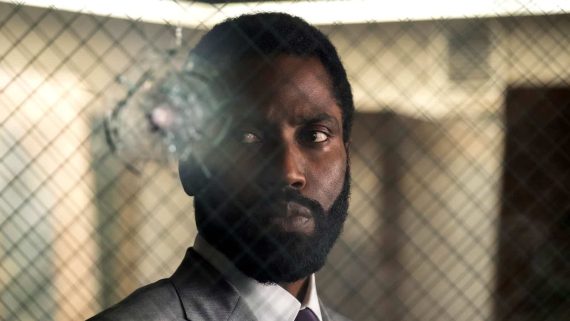 Not helping matters are the sound issues. I’d heard many people complain about the mix of Tenet before watching it, so I was expecting a problem but thought perhaps it was an over-exaggeration.

To be fair, the sound becomes more decipherable as it goes on or perhaps I gradually attuned myself to the style, but the first quarter is particularly bad. I found it comical after a while, when practically every line delivery in the first half-an-hour plays out under the sound of a thundering train or gunfire, or is muffled by a mask.

These issues meant I didn’t know what the hell was going on during the first act. However, as the mix settled down and the plot found a clearer focus (i.e. you knew who the good guys were, who the bad guys were and what needed to be done to stop them) I settled back and really enjoyed myself. 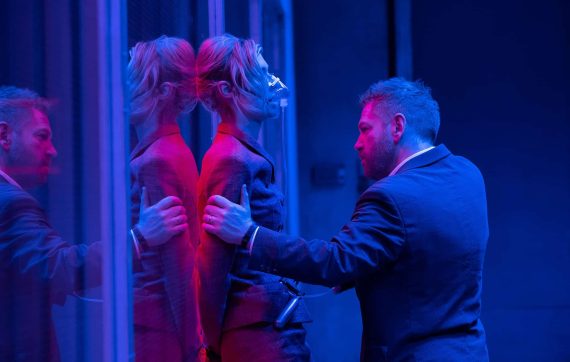 Though Nolan’s exposition-heavy writing can hinder his films, he remains a master at crafting impressive and memorable imagery. His greatest skill is in making things feel tactile, despite the fantastical elements of his concepts. He achieves this by doing things for real whenever possible. Where many Hollywood productions lay on the CGI so thick everything seems animated, Nolan prefers to use in-camera effects. The most impressive example in Tenet is where a Boeing 747 is crashed into an airport building. You’d think something like this would have to be done with CGI or at least miniatures, but no. Nolan and his team found an out-of-service shell of an actual 747, rigged it up to be able to move, drove it into a building they constructed and blew it up. It sounds like an unnecessary extravagance, but that real, epic sensation is delivered on screen and it’s great to see directors like Nolan being given the resources to do this.

As with all of Nolan’s films, it’s incredibly strong on a technical level too (other than the audio, arguably). It looks fantastic, with impressive production design (I love the industrial-looking ‘turnstiles’) and great use of a range of exotic (and some not-so-exotic) locations. Tenet is basically Nolan’s spin on a Bond movie, having a spy travel around the world, using cool gadgets to stop the bad guys, but enclosing it all in a complex sci-fi world. 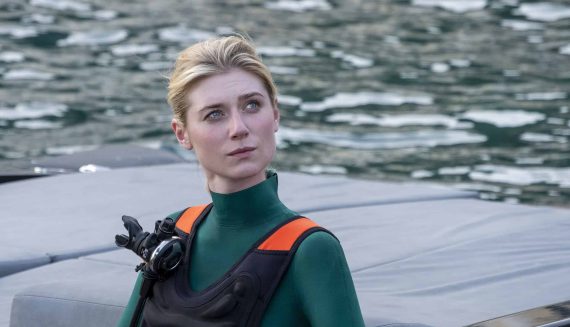 Performances are decent too. Branagh has fun hamming it up as the evil super-villain, Washington makes a decent Bond-replacement, Pattinson is suitably enigmatic and Debicki impresses yet again after grabbing my attention in Widows.

So, like a lot of Nolan’s films, Tenet is well-made, ambitious and full of clever ideas but these are bludgeoned at the audience so often they give you a headache rather than wide eyes. There are enough moments that stick to keep you watching though and it’s handsomely mounted with production practises that keep Nolan’s wild ideas rooted in a viscerally real world. As such, it’s still well worth watching (probably more than once) despite any issues with the delivery.

Tenet is out now on 4K UHD, Blu-ray, DVD and digital in the UK, courtesy of Warner Bros. I watched the Blu-ray version and the picture quality is excellent, as you’d expect for a new tentpole title like this. The audio is powerful, but alas hasn’t done much to change the issues many had with the mix. The dialogue is still often lost under the mountains of sound effects or the booming music. Dialogue scenes are positively dwarfed in comparison to the wall-shaking action set pieces too, forcing you to reach for the remote at regular intervals to address the balance, which is a bugbear for me watching films at home and seems to be an issue with most modern films.

The UHD and Blu-ray editions include a feature-length documentary on the making of the film called ‘Looking at the World in a Different Way: The Making of Tenet’, which can also be watched in shorter chunks, relating to different aspects of the production. It’s a thorough and eye-opening documentary on the incredible amount of work and resources went into making the film. It’s very much a back-slap heavy promotional piece, as is the norm for new releases like these, and it doesn’t discuss its troubled journey to cinemas, but for a making of it’s pretty damn good.