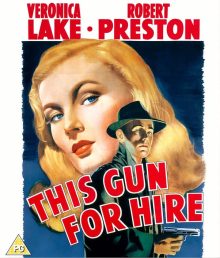 This Gun For Hire was a key cinematic turning point for a couple of reasons. For one, it’s a seminal film noir. Though there were many proto-noirs made prior to it, This Gun For Hire was one of the early films made in the ‘true’ original period of the genre that sowed the seeds for many of the tropes that would follow.

Also, This Gun For Hire was pivotal in the careers of its stars. Veronica Lake had already turned heads in I Wanted Wings and impressed in Sullivan’s Travels but this equally successful follow-up helped cement her stardom. Most notably though, This Gun For Hire made Alan Ladd a star after languishing in minor roles for a decade and despite him only getting 4th billing in the film (which is ridiculous as I’m pretty sure he gets more screen time than Robert Preston and Laird Cregar). The pair worked so well together in This Gun For Hire that they starred together as leads in three more films, The Glass Key, Ramrod and The Blue Dahlia.

This Gun For Hire didn’t do much for director Frank Tuttle’s career though. A studio workhorse for many years, he never became a household name as a number of the great noir directors. His varied output wasn’t particularly consistent in terms of quality though, by all accounts, and his fame wasn’t helped when he ‘named names’ in front of the House Un-American Activities Committee (HUAC).

This Gun For Hire is still well-loved though and is being released on Blu-ray by Eureka as part of their Eureka Classics range. Being a fan of all things noir, I eagerly snapped up a copy to review. 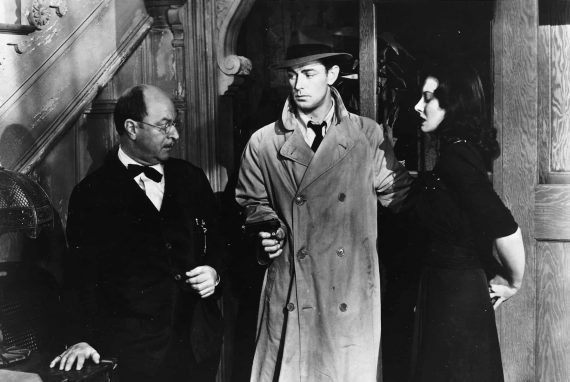 Based on a Graham Greene novel (titled ‘A Gun For Sale’ in the UK), This Gun For Hire sees Ladd play Philip Raven, an assassin who we witness killing a chemist to retrieve a stolen formula for his employer Willard Gates (Laird Cregar). Raven is double-crossed, however, as he’s paid in marked bills that Gates tells the police have been stolen in a violent robbery. Due to this, on top of suspicion over what he was retrieving and for whom, Raven becomes driven to get revenge and uncover who’s behind all of this (as Gates is only an employee himself), all while being chased by the authorities.

Meanwhile, Ellen Graham (Lake), a singer and magician, is hired by Gates to perform at his club in L.A. before being approached by a Senator (Roger Imhof) to investigate Gates as an undercover agent whilst in his employment. Gates and the chemical company he works for are under investigation for treason. Ellen agrees to help out, but on the train down to L.A., she bumps into Raven who, overhearing she’s off to work for Gates, grows suspicious of her. After Gates spies the pair together on the train, however, he believes they’re in cahoots and calls the police to capture Raven. The assassin uses Ellen to avoid capture but attempts to kill her, believing she called the police and is one of Gates’ pawns. Ellen manages to escape and heads to L.A., calling her police detective fiance Michael Crane (Robert Preston) to come to her rescue. 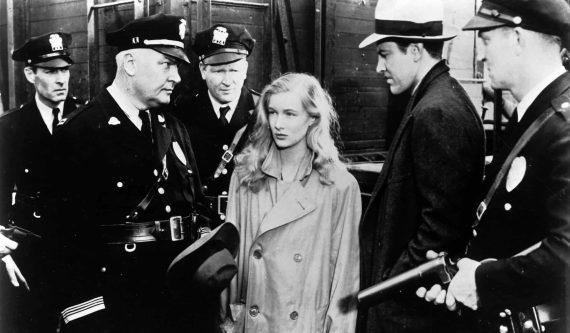 It’s not Raven she needs rescuing from, however, after Gates lures her to his mansion and orders her to be killed due to her seeming collusion with Raven. Crane arrives before Gates’ assistant does the deed, but his hog-tied fiance is hidden in a cupboard before he sees her. So Raven ends up saving Ellen, seeing how she’s no friend of Gates’, and he takes her on the run with him to help get to the bottom of the criminal plot they’re both involved with.

It’s rather a complicated plot then, as you can see, but this is one of the film’s strongest points. A lot of credit should likely go to Greene for this, of course, but script-writers Albert Maltz, W.R. Burnett must also be applauded for their fine adaptation for the silver screen. They reportedly changed quite a bit, softening the Raven character in particular. Though complex, the story never gets overly confusing and Tuttle has it race along, rarely pausing for breath.

That said, there is a bit of a lull towards the end where we get some cod-psychology trying to explain Raven’s wicked ways to make him a little more sympathetic to the audience. It does help flesh out the character though and the pause helps the exciting finale feel like it’s firing on all cylinders. 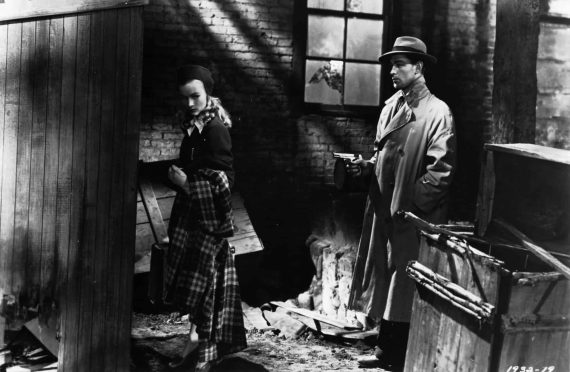 A couple of added details overstuff the story a little too, particularly Ellen’s undercover ‘mission’, which isn’t made much of as the film moves on. Otherwise, this is tightly constructed and gripping storytelling at its finest.

The film is also deliciously dark, in the best noir tradition. The Raven character, though given a few redemptive qualities in his Hollywood form, is cold and cruel, demonstrated from the offset when he kills the chemist’s secretary too because she saw him. He does show sympathy for cats and children though, so isn’t totally soulless.

As mentioned, the film made Ladd a star, and rightfully so. Despite getting fourth billing, he’s the driving force of the film and makes a greater impression than anyone else. Lake is decent too though, to be fair. Though the scenes slow the furious pace down a touch, her two musical numbers are a lot of fun, for instance, as she performs some neat magic tricks whilst she sings, only some of which are enhanced by camera tricks. 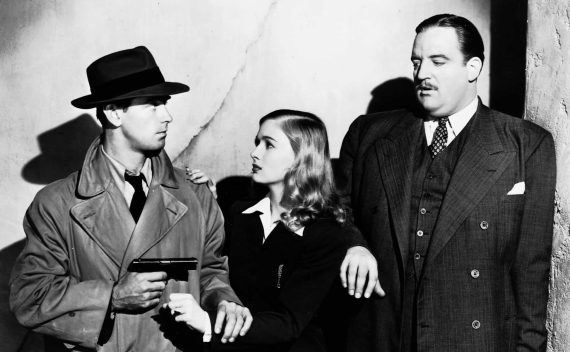 Being made during the war (though shot before the US got involved), there’s some mild propaganda in the film, with the MacGuffin involving selling chemical weapons to the Japanese. However, the villains are American and shown to be obscenely wealthy, whereas the heroine and anti-hero are shown to be poor. So, though there’s a patriotic air to the finale, ultimately the film seems to pit those without against those with, suggesting the leftist leanings of its creatives (Maltz was also called upon in the HUAC hearings) had more to do with the story’s conflict than the government.

Wrapping things up then, This Gun For Hire is a fine tale of deception and revenge. It’s tough, taut and gripping like the best of its genre. The film helped influence many others to follow and deserves to stand beside the more famous noir titles we all know and love.

This Gun For Hire is out on 14th September on Blu-Ray in the UK, released by Eureka as part of their Eureka Classics series. There is some very light damage on the picture but this is barely perceptible (I watched it on a projector, blown up on quite a large screen) and the picture looks great overall. Audio is sturdy too.

Adrian Martin’s commentary is very good. He spends a great deal of time comparing the film to the original novel though, which is illuminating but I felt he stuck to the subject too frequently as I grew less interested as the film moved on.

The radio adaptations are less vital but still nice additions, offering a different take on the material.

The booklet, as always, is as good as any video essay or documentary, so shouldn’t be tossed aside.