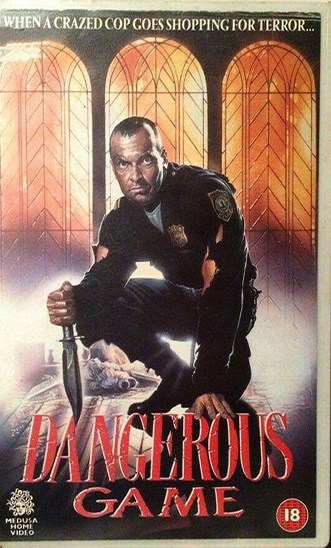 Dangerous Game is a seemingly little-seen/all but forgotten gem from the heyday of Ozplotaition that set director Stephen Hopkins on course for a Hollywood career (Predator 2, Judgment Night, Blown Away, 24). A stalk and kill action/horror hybrid, this is an assured calling card from a novice director with a killer concept. Rogue cop Murphy (Grives) is verging on mental collapse having had enough with society and the shackles his superiors keep him under. He’s particularly got it in for college student Jack (Graham) and his group of ultra-80s youngsters and when he’s all but kicked off the force for an altercation with Jack, Murphy sets his sights on retribution. Jack and his posse, through various plot contrivance, end up in a closed for the night shopping mall with a plan to party. However, Murphy has tracked them there and with the mall locked down, he sets about stalking and slashing the group of plucky youngsters.

Sometimes so 80s it hurts (big hair, crazy clothing, funky music!), Dangerous Game is nevertheless a tightly wound horror with a great villain. The setup and setting lead to a great game of cat and mouse as the unhinged cop stalks his prey in the massive deserted mall. Hopkins shows his knack for thrilling set-pieces even at this early stage in his career (this reviewer still believes Hopkins’ Predator 2 is a massively underrated action horror and a worthy sequel!), staging some impressive stalk and action sequences as Murphy hunts the group with a giant crossbow. There’s motorcycle action (inside the mall!), shotgun action and an impressive stalk sequence on the outside of the high-rise building. The film also wisely builds to the eruption of violence, the first half effectively given over to building tension, character and showing the crumbling psyche of Murphy. 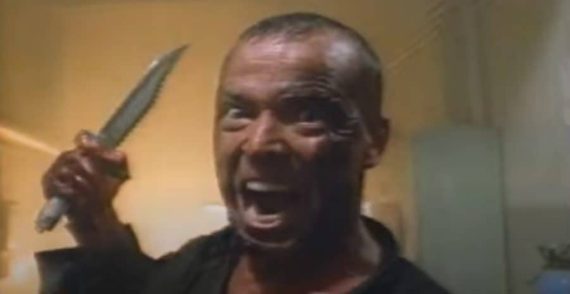 Steven Grives is fantastically unhinged as the maniac cop, refreshingly only going full-blown psycho in the final third. He initially just wants to torment the group but when he accidentally kills one of them he at first regrets the action before it takes its toll on his mind (in a bravura set-piece). Grives is physically menacing and commits full force to the manic character, just keeping him the right side of OTT. It’s not the only refreshing aspect, as the group of college kids are also pleasingly likeable. Rounded characters rather than the vapid cyphers that clog up teen horror movies these days, the group have a believable dynamic, are mostly free of cliché and must find themselves having to fight back in order to survive. Miles Buchanan is particularly good as the group computer nerd and pity he didn’t go onto bigger and better things. But there’s is another star of the film that all but steals it: the cinematography. Helmed by long-time Hopkins collaborator Peter Levy the film looks fantastic and for a low budget flick features some impressive technical shots that highlight the setting and action. Those long swooping crane shots are worth seeing the film for alone!

Sure, it has a somewhat 80s music video aesthetic about it (but that’s all part of the charm!), there’s a little bit of the old “Wait how’d he do that? How’d he get there?” but hey, that’s horror logic for you, and hardcore horror fans may not find it as gruesome as it could have been but overall Dangerous Game is a superior slice of genre thrills that gets better as it goes along.

Resurrect on Blu-Ray: there’s an out of print Region 1 DVD otherwise give this the full Blu Ray treatment.

Trailers on tape: As with most Medusa rental tapes this was packed with some ace trailers for other Medusa titles of the time including The Iron Triangle, Scarecrows, Breaking Loose, Burndown, Trained to Kill and Java Burn. Being the B-movie nerd that I am, I’ve seen and can recommend The Iron Triangle (good Vietnam actioner with Beau Bridges), the excellent Scarecrows (rampaging scarecrows hunt/slay a band of robbers: cool!) and even Trained to Kill, which while kinda naff is some fun action hokum!