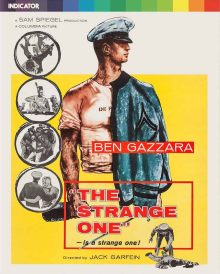 Jack Garfein only directed two films in his life but he made quite an impact on modern cinema. The two titles, The Strange One (a.k.a. End as a Man) and Something Wild came and went, garnering mixed reviews and weak box office returns. However, he was a key figure in the famous Actors Studio, discovering or giving breaks to performers such as Ben Gazzara, Steve McQueen, George Peppard, Bruce Dern and Pat Hingle. He was also an acting tutor, helping hone the craft of greats such as Sissy Spacek, Bruce Dern and Ron Perlman.

Reflecting Garfein’s background and influential work with respected actors, The Strange One is most notable for the fact it was ‘the first picture filmed entirely by a cast and technicians from the Actors Studio’, or at least that’s how it was promoted. Some minor parts and such were made up from others outside the Studio clique. However, for the most part, it was a film that came from the group. In fact, the source material (a novel by Calder Willingham) had already been staged as a play by the Actor’s Studio and directed by Garfein. Most of the cast were retained for the film (with George Peppard replacing William Smithers) and although producer Sam Spiegel originally wanted Elia Kazan to direct, Kazan convinced him that Garfein was up to the task. 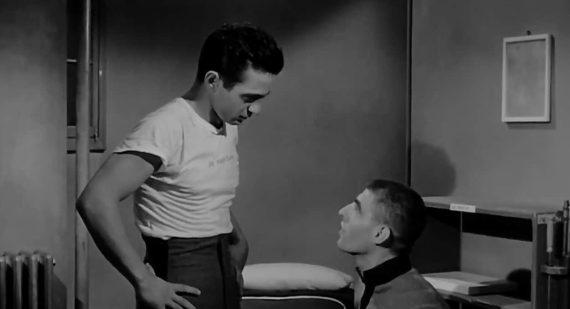 The result, as you might expect, was an acting showcase, above anything, and has since become a fascinating look at a pivotal moment in Hollywood history when acting styles were changing to something more akin to what we expect to see now. Indicator, who are dedicated to unearthing interesting, largely forgotten films from the past, have turned their hand to The Strange One, releasing a polished Blu-ray with a handful of extras.

The film is set in a fictional military college in America’s south. Cadet Staff Sergeant Jocko De Paris (Ben Gazzara) is a senior there, who revels in hazing new recruits and bullying all around him. From the first extended scene, we witness Jocko forcing two subordinates, Marquales (George Peppard) and Simmons (Arthur Storch), into helping him get an older cadet, Gatt (James Olson), drunk in order to make him lose money at poker and later beat up another cadet, George Avery (Geoffrey Horne). This latter action seems to be Jocko’s primary aim, as he has a previous beef with Avery and force-feeds him alcohol and dumps him in the college grounds after the assault. This leads to Avery getting expelled, much to the anger and disappointment of his father, Major Avery (Larry Gates), who also works at the college. The Major smells something fishy though, believing his son’s story that he was set up by Jocko, so he sets out to clear his name. Crucial to allowing this to happen though is testimony from the only witnesses; Marquales, Simmons, Gatt and Jocko’s friend Koble (Pat Hingle). On top of facing the dishonour of ‘ratting’ on a comrade however, the cadets would face their own expulsion if they owned up to being part of the plot. So Jacko continues his abusive reign over the college. 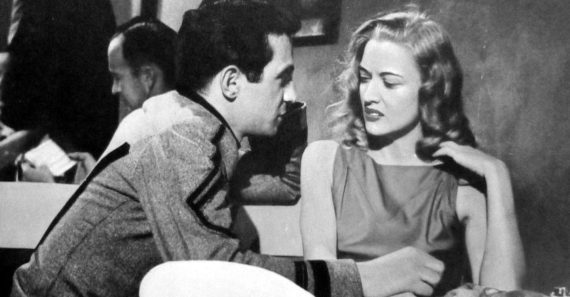 It was interesting watching this not long after John Ford’s The Long Gray Line, which was only released two years prior to this. Both are set in military schools but their approach couldn’t be more different. The Long Gray Line is a sappy, sentimental melodrama, paying warm tribute to a man who lived in the school all his life and considered the recruits his family. The Strange One presents a military institution, with all its rules and hierarchy, as the perfect place to breed bullying and abuse of power. It’s a much tougher and nastier film, that points towards the darker dramas that would emerge over the next couple of decades, particularly in the grittier films of the 70s. My taste in cinema much prefers the sharp edge of The Strange One, so I liked it quite a lot.

The film’s greatest asset is Gazzara. Most of the cast are solid, coming from the illustrious Actors Studio, but its Gazzara, making his film debut, that truly astonishes. He creates one of the most icily cruel of all the villains I’ve seen on screen. Eloquent, sharp and charismatic, despite his unsavoury intentions, he’s captivating to watch and sells the fact his character can get away with what he does whilst still having admirers among the cadets. Willingham’s razor-sharp dialogue helps too. 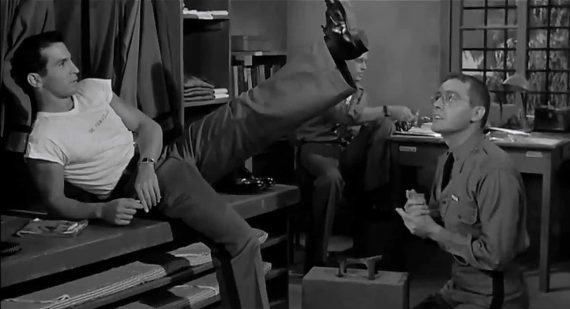 There is one actor that lets the side down though. Arthur Storch is much too caricatured as the cowardly teetotaller Simmons, who is swift to lambast Marquales for not speaking out against Jacko but does little to aid justice himself. Storch gives himself buck-teeth and facial twitches, completely overdoing things and causing him to stand out against his more subtle co-stars.

There’s a notable gay subtext in play, with barely masked homoerotic undertones throughout. It’s hard to say what point is being made with these but it adds a curious sexual edge to the film and will provoke debate among audiences. There’s an allusion to racial prejudice at the end too which helps cast the meaning behind the film in a different light, though being such a brief aspect appearing in only the final minute might cause it to be construed as an afterthought.

Although there are possible depths that can be dug into the film, on the surface, it’s quite a sparse and straightforward tale of bullying in the military. It becomes effective through its vicious approach, acidic dialogue and frighteningly callous villain/anti-hero. There’s perhaps a weak link here and there, but, as an acting showcase, it’s a strong piece of work that feels ahead of its time. 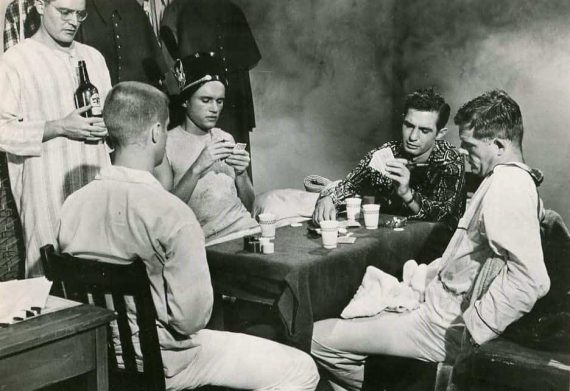 The Strange One is out on 27th April by Powerhouse Films on Blu-Ray as part of their Indicator label in the UK. As has become the norm for Indicator, the picture and audio have been meticulously restored and look as fresh as the day the film was first screened.

– High Definition presentation
– Two presentations of the film: The Strange One, with the original US title sequence, and End as a Man with the rarely seen UK titles
– Original mono audio
– Audio commentary with critic Nick Pinkerton (2020)
– Finding Direction (2020): Jack Garfein recalls his directorial debut, and his work with the Actors Studio
– Ben Gazzara Remembers ‘The Strange One’ (2009): archival interview with the acclaimed actor
– Image gallery: on-set and promotional photography
– Original theatrical trailer
– New and improved English subtitles for the deaf and hard-of-hearing
– Limited edition exclusive booklet with a new essay by Brad Stevens, Ben Gazzara on The Strange One, an archival interview with Jack Garfein, an overview of contemporary critical responses, and film credits
– World premiere on Blu-ray
– Limited edition of 3,000 copies

Nick Pinkerton’s commentary is excellent, packed with behind the scenes anecdotes and illuminating background information on the film’s inception and reception. The Garfein and Gazzara interviews (both around 10 minutes long) are decent too, offering first-hand takes on the production. It’s also interesting to hear Garfein’s personal story. He was a Holocaust survivor, living through 11 concentration camps and the death of the rest of his immediate family.