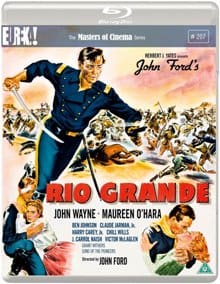 Tasked with defending settlers in 1879 Texas from attacking Apaches, Lt. Col. Kirby Yorke (Wayne) has an already difficult job complicated when his undermanned regiment is joined by a new recruit in the form of Yorke’s underage son Jeff (Jarman Jr.), whom the Lt. Col. hasn’t seen in a year. Hot on Jeff’s heels is his mother, and Yorke’s wife, Kathleen (O’Hara), eager to retrieve her son, but neither he nor his father is willing to allow that to happen. Elsewhere, an Apache attack on their fort and another enlisted man being wanted for manslaughter further add to Yorke’s plight.

Johns Ford and Wayne are renowned for making numerous westerns, often with the former directing the latter. The western genre is one I enjoy, but admittedly haven’t seen many of, and this is my third western collaboration between Ford and Wayne, after Stagecoach and The Man Who Shot Liberty Valance, both of which are excellent. Rio Grande appears on the 1001 Movies You Must See Before You Die list and is apparently well regarded, so I was keen to include it amongst my watched list too, but unfortunately I was overall disappointed with this film. 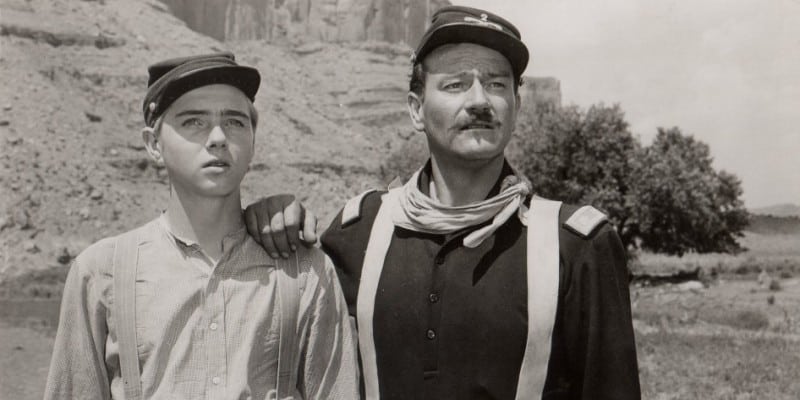 The main problem I have is the lack of focus. This is a relatively brief film, especially by modern standards, at just 105 minutes long, yet within this time frame there are attempts made at a three-handed family drama, a rekindling romance between estranged spouses, a coming-of-age war epic and a possibly-good-man-on-the-run-from-the-law story, all interspersed with jarring slapstick humour and far more singing than any film that isn’t a musical should possibly have. With so much going on in so many different directions no individual story ever feels fully fleshed out enough to grab and retain your attention, and the climax that unsuccessfully attempts to bring all these threads together feels rushed and tacked on, alongside being harried by an extremely irritating child (Karolyn Grimes, Zuzu in It’s A Wonderful Life!).

Tonally it’s all over the place too. For every intensely serious conversation between Yorke and his son – within the first of which Yorke makes no attempts to conceal his intentions to shoot his son should he desert – there’s an over the top, broadly comedic scene of the increasingly exasperated Sgt. Maj Quincannon (McLaglen) attempting to train his band of unruly recruits who are more concerned with when dinner is being served than learning anything about horse-riding. The depiction of the Native Americans as faceless, nameless villains devoid of personality or motive is also unsettling, especially given how this isn’t always the case in Ford’s westerns. They are given some attention for their own musical number, but it is seen as an annoyance to our heroes. 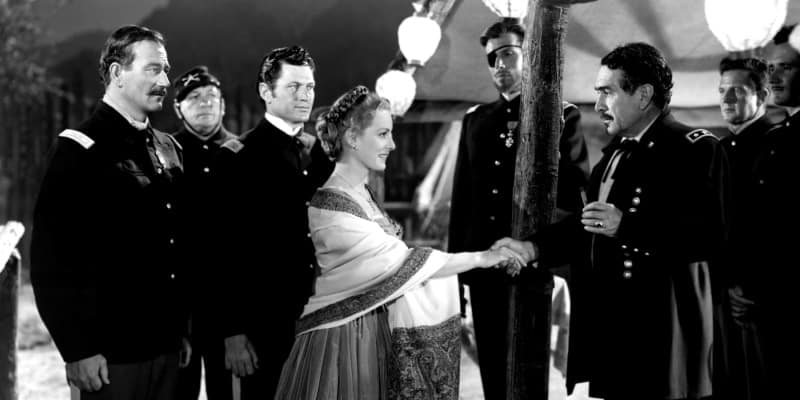 The multitude of story threads each attempting to encompass an entire story arc means that the tensions or obstacles within are underdeveloped or all too easily overcome, so Rio Grande is a thoroughly unsatisfying viewing experience. It has the benefits of most great Ford westerns in the impressive stunts and scenery on display, and the performances are certainly good and enjoyable, plus the songs sung throughout – predominantly by the Sons of the Pioneers, one of whom is Ford’s son-in-law Ken Curtis – are decent if a little distracting, but I can’t help feeling that there are many better westerns out there more deserving of your time.

Rio Grande is now available for the first time in the UK on Blu-Ray from Eureka Entertainment as part of The Masters of Cinema Series. Accompanying the newly restored 1080p Blu-Ray transfer are a new and exclusive feature-length audio commentary by Stephen Prince, scene-specific audio commentary from Maureen O’Hara, a video essay on the film by Tag Gallagher, archival documentary Along the Rio Grande featuring Maureen O’Hara, archival featurette The Making of Rio Grande and a collector’s booklet featuring essays by Howard Hughes and Phil Hoad, and a transcript of interviews with John Ford and Harry Carey Jr.