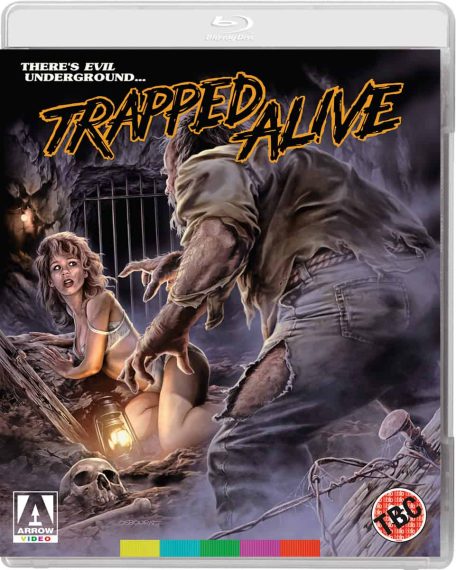 Now this is a hoot. Trapped Alive (aka Trapped) has everything a B-movie should have, not least one made by some Brits in the US at the tail end of the 80s. Escaped convicts, sexy kick ass women, an underground dwelling cannibal, a mine to trap everyone in, a bored housewife who may just hold the key to all the crazy shenanigans and the king of B-movies himself Cameron Mitchell all make for a silly, low rent but oh so fun horror ride.

Simple set up (trapped escaped convicts and sexy ladies in a mine must fight off crazed cannibal) lets the B-movie barminess run riot. We’ve got a nasty cannibal stalking the motley group, an off his rocker convict to ham it up and terrorise everyone also, and come the finale an inexplicably stripped to her underwear (!) heroine to take charge and kick ass. Some nudity, some gore and an impressively custom built mine set all add to the fun. The acting is as ropey as some of the action though Alex Kubik (pretty much the only seasoned pro in the cast) adds genuine menace and some OTT craziness as the lead convict. Cameron Mitchell also makes any B-movie 20% better by just being in it, despite his character actually being asleep for 50% of his scenes!

Produced by Christopher Webster who produced the likes of Hellraiser 1 & 2 and Heathers, Trapped Alive (shot as Forever Mine: which is still a much better and suited title!) was the first film produced at his now defunct Windsor Lake Studios in Wisconsin. Despite using the snow covered environment for extra production value, the flick still can’t quite escape its low budget limitations. The pace is perhaps just a tad too slow considering what’s going on meaning it, unfortunately, takes an age to get to the cannibal bothering action. However, there is still plenty of B-movie absurdness to take up the running time (including one very memorable kill scene featuring a giant hook!) and despite budget strapped restrictions; Trapped Alive is still a fun midnight movie treat that fans of the genre will get a kick out of.

However, the best are the following 3 featurettes about the making of the film which is great viewing for fans of B-movies and how they are made.

There’s EVIL Underground: is a fab 30 minute documentary featuring interviews with director Leszek Burzynski, cast and crew members and DOP Nancy Schreiber. This is great viewing and a real insight into the trials and tribulations of making a low budget shocker in the wilds of Wisconsin. Everyone one talks fondly of the film and experience, and again it’s refreshing to see those involved talked so warmly of the film despite its limitations and kookiness.

Upper Michigan Tonight: is a 1988 twenty minute television special which aired on local TV about the making of the film and Christopher Webster setting up Winsdor Lake Studios. Interviews and behind the scenes footage with the cast and crew (looking much younger) give an insight into the harsh winter working conditions and show the mine set being built: which was quite an ambitious and impressive achievement for a low budget film. It’s a little bittersweet also, as Christopher Webster obviously had big dreams for the studio but perhaps not the resources to achieve said dreams. However, this is a great insight into the making of a B-movie in the 1980s.

Leszek Burzynski – The Early Years:  is a short but informative chat with the director about his early work (on the The Two Ronnies no less!), specifically his involvement with horror flick Blood Harvest which starred Tiny Tim. It’s fascinating stuff, especially for cult movie fans, and Burzynski is a warm and pleasant person to listen to.

Arrow is doing a great job at producing these mini docs about the making of movies that most critics wouldn’t give the time of day to. Keep up the good work.