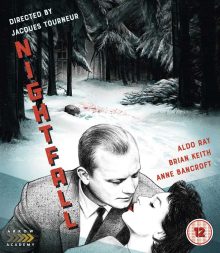 Jacques Tourneur’s most famous and respected film is probably the film noir classic Out of the Past (a.k.a. Build My Gallows High), yet he’s best known as a horror director. He directed a number of genre favourites for producer Val Lewton, namely Cat People, I Walked With a Zombie and The Leopard Man, as well as the much-loved Night of the Demon (a.k.a. Curse of the Demon) a few years later. Tourneur did direct a couple more noir titles though, they just never gained the reputation of Out of the Past. Looking to address the balance, Arrow Academy are releasing Tourneur’s Nightfall, a film noir released towards the end of the genre’s golden age, when its popularity was waning.

In the film, Aldo Ray plays commercial artist Jim Vanning who we first meet trying to keep in the shadows of the city at night. Looking lonely and troubled, he wanders into a bar where he meets the attractive Marie Gardner (Anne Bancroft) who also doesn’t seem too happy. She asks him to lend her $5 and he does, before flirting with her and inviting her to have dinner with him. It all looks to be going well for the couple, until a pair of gangster-types, John (Brian Keith) and Red (Rudy Bond), grab Jim and ‘thank’ Marie for capturing him for them. The thugs take Jim away, rough him up and threaten to kill him if he doesn’t tell them where he’s hid their money. We then learn through a series of flashbacks what led up to this.

It turns out Jim and his doctor friend Edward (Frank Albertson), who were enjoying a camping and hunting holiday out in the Wyoming mountains, rushed to the assistance of John and Red after they crashed their car nearby. The pair of criminals were escaping from a lucrative bank heist and didn’t want to risk detection so proceeded to execute Jim and Edward. Only Jim wasn’t killed and on their way back to their car, John and Red pick up the wrong case, leaving the injured Jim with the money, who runs off with it before the pair notice it’s gone.

Back in the present, Jim manages to get away from John and Red, and is drawn to visit Marie to hide out. He realises she wasn’t hired by the pair to get him and confides in her the truth behind his predicament. When John and Red show up at her apartment soon after, she’s forced to go on the run with Jim and the two have to stay one step ahead to survive and hopefully find the money Jim left in the mountains as he escaped in an injured state. He dropped it before a great snowstorm and, with spring around the corner, it should have melted by now.

Added to the mix is insurance investigator Ben Fraser (James Gregory), who has been following Jim for a short while, trying to find the money for the bank that was robbed. After chatting to Jim, Ben starts to believe maybe he’s innocent of the theft, so might prove to be an ally to the fugitive as John and Red close in on him.

I’m a sucker for a good film noir, so maybe I’m an easy target, but I really enjoyed this. It has a lot of the ingredients of a classic example of the genre; hard-boiled dialogue, moody lighting in its night scenes and dark, tough subject matter. However, Nightfall also subverts many of the tropes and some consider it a ‘revisionist-noir’. Most notable is the fact that, although many of the early scenes in the city are dark and shadowy, much of the film is set in the bright snow-filled vistas of Wyoming. In fact, the majority of the film’s most tense and grim sequences happen in this blinding sunlight, most notably the execution of Edward and the film’s finale. There’s also a tense chase in a daytime situation unlikely to be usually considered dangerous, a relaxed outdoor fashion show. Tourneur and his DOP Burnett Guffey make the best of both the dark and light sequences, particularly location shoots in the mountains and a field of oil pumps.

Other noir stereotypes are turned on their head too, such as the classic ‘femme fatale’. When we first meet Marie and she shares some witty dialogue with Jim we instantly have her down as the film’s femme fatale, particularly after it seems she was employed by the villains to entice him. However, she soon turns out to be an innocent and the romance that blossoms between her and Jim is evermore genuine and without ulterior motives.

Nightfall is also less bleak and fatalistic than most film noir. That’s not to say it’s all sweetness and light though. With the Hayes Code still in practice, there’s not much blood on screen, but the violence and threats of violence here are pretty brutal when they come. A vicious-looking snow-clearing truck is particularly well-utilised and reminded me of the wood chipper scene in Fargo.

Adding to the threat is a particularly sadistic villain in Red. Brian Keith’s John is pretty cold-hearted, but not as twisted as his partner in crime. Rudy Bond plays Red with a gleeful psychopathic menace, making him one of noir’s most memorable bad guys. The heroes are worth noting too. Aldo Ray isn’t a well-known star these days, but he has a unique quality that’s well utilised here. He has a down-to-earth everyman quality to his eyes and mannerisms, but his solid physique gives him a tough-guy look to suggest you shouldn’t mess with him. Also coming across well is Anne Bancroft (later to be best known as Mrs Robinson from The Graduate) who crafts a strong, independent female character, selling the unlikely swift leap she makes into Jim’s arms.

There’s just one element of the film that rubbed me up the wrong way and that’s the finale. Without wanting to spoil it too much, there’s a character twist that smacked too much of deus ex machina for my liking. The dynamic is alluded to at points during the film I guess, but the shift is a little too conveniently placed and extreme for my liking.

It’s a relatively minor quibble though in an otherwise well constructed and exciting spin on the film noir genre. It’s tough, handsomely mounted and weaves its enjoyably pulpy story effectively (until the end that is). With an interesting cast and locations, it stands out from the crowd to reveal itself as a lesser-known gem of the genre that deserves to be mentioned alongside Tourneur’s cast iron classic Out of the Past.

Nightfall is out on 3rd June on Blu-Ray, released by Arrow Academy. The picture and sound quality are first rate.

The two essays/appreciations and the commentary are all excellent. There’s only a little crossover too, with all contributors offering slightly different takes on the film and filling us in on interesting facts surrounding the production.